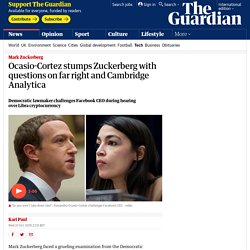 Ocasio-Cortez and other lawmakers grilled the Facebook CEO during a hearing in front of the US House of Representatives financial services committee regarding the launch of Facebook’s cryptocurrency project, Libra. “In order for us to make decisions about Libra, I think we need to kind of dig into your past behavior and Facebook’s past behavior with respect to our democracy,” the New York congresswoman said, before asking Zuckerberg when he had first learned of Cambridge Analytica’s operations.

Zuckerberg and other Facebook executives have declined to disclose when they found out the company was harvesting and selling user data to influence elections. “I believe some folks were tracking it internally,” Zuckerberg said. What Can Prewar Germany Teach Us About Social-Media Regulation? Read: It’s time to regulate the internet Radio was different. 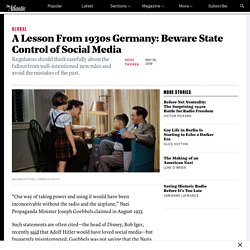 Radio only became central to Nazi aims after Hitler was elected chancellor in January 1933, but Goebbels quickly exercised power over the medium, because the state already controlled its infrastructure and content. State control over radio had been intended to defend democracy. It unintentionally laid the groundwork for the Nazi propaganda machine. Radio emerged as a new technology in the early 1920s, and the bureaucrat tasked with developing regulations for it in the Weimar Republic, Hans Bredow, initially had high hopes. Pas LOL du tout. Can Mark Zuckerberg Fix Facebook Before It Breaks Democracy? At ten o’clock on a weekday morning in August, Mark Zuckerberg, the chairman and C.E.O. of Facebook, opened the front door of his house in Palo Alto, California, wearing the tight smile of obligation. 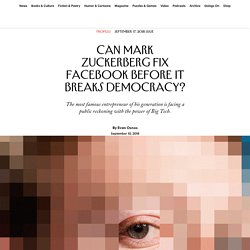 He does not enjoy interviews, especially after two years of ceaseless controversy. Having got his start as a programmer with a nocturnal bent, he is also not a morning person. Walking toward the kitchen, which has a long farmhouse table and cabinets painted forest green, he said, “I haven’t eaten breakfast yet. Why Mark Zuckerberg’s 14-Year Apology Tour Hasn’t Fixed Facebook. Le bunker, la passoire, les data et moi. The Smallness of Mark Zuckerberg.

How Cambridge Analytica turned Facebook ‘likes’ into a lucrative political tool. The algorithm at the heart of the Facebook data breach sounds almost too dystopian to be real. 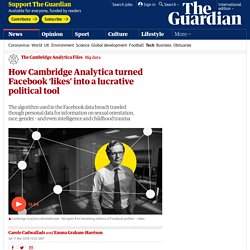 It trawls through the most apparently trivial, throwaway postings –the “likes” users dole out as they browse the site – to gather sensitive personal information about sexual orientation, race, gender, even intelligence and childhood trauma. A few dozen “likes” can give a strong prediction of which party a user will vote for, reveal their gender and whether their partner is likely to be a man or woman, provide powerful clues about whether their parents stayed together throughout their childhood and predict their vulnerability to substance abuse. Facebook détecte notre classe sociale. Et déclenche la lutte (algorithmique) finale.

To Stir Discord in 2016, Russians Turned Most Often to Facebook. Inside Facebook's Hellish Two Years—and Mark Zuckerberg's Struggle to Fix it All. Why Facebook's news feed changes are bad news for democracy. “Homepage. 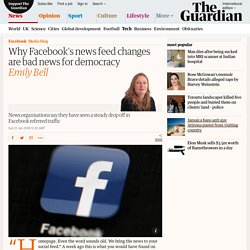 Even the word sounds old. We bring the news to your social feed.” A week ago this is what you would have found on the not-the-homepage of the millennial-focused video site Now This News. Icons for Snapchat, Instagram, Twitter and Facebook guided viewers out on to the social web where the real action was. Click there now and it is a different story: social media icons have been relegated to the very bottom of the page, while stories like “Unicorn Noodles Are Now A Thing” and “Cape Town is Going to Run Out of Water” are plastered over Now This videos.

The homepage is back, and not just for those chronically old people over 40, but for every news organisation that wants to survive falling off the great Facebook cliff of 2018. For many news organisations this was a confirmation of what they had already been experiencing. No other organisation in the history of the world has had the impact Facebook has on the news ecosystem. . … we have a small favour to ask. Facebook Finally Blinks. Mark Zuckerberg moved fast and broke shit, lots of shit. 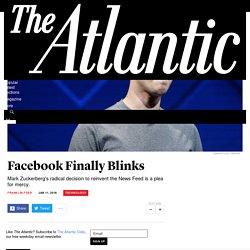 He broke journalism, by radically deflating the value of the digital advertising on which the livelihood of media now depends; he broke the reading habits of his users, the lab rats in his grand experiment, by constantly manipulating them and feeding them an endless stream of dreck to jack up their “engagement” with his site; and in a way, he broke American democracy, by sitting on his hands as a foreign adversary exploited his platform and by creating the world’s most efficient vehicle for spreading political lies and agitprop. 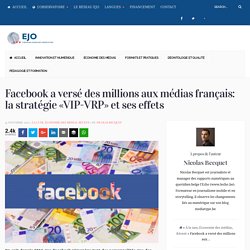 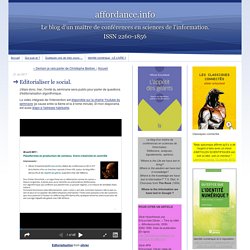 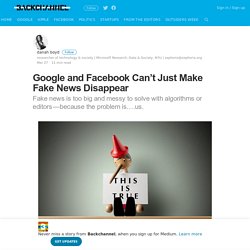 My anger is growing, not only because as I write this I’m almost 10 months pregnant and grouchy, but also because I see the possibility of well-intended interventions backfiring. I understand why folks want to do something now — there’s a lot of energy in this space, and the underlying issues at play have significant consequences for democracy and society. Yet what’s happening at this present moment is not actually new. It’s part of a long and complicated history, and it sheds light on a variety of social, economic, cultural, technological, and political dynamics that will not be addressed through simplistic solutions. The Mark Zuckerberg Manifesto Is a Blueprint for Destroying Journalism.

It’s not that Mark Zuckerberg set out to dismantle the news business when he founded Facebook 13 years ago. 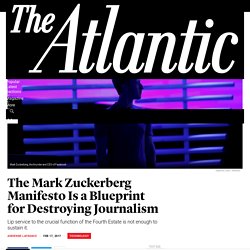 Yet news organizations are perhaps the biggest casualty of the world Zuckerberg built. There’s reason to believe things are going to get worse. A sprawling new manifesto by Zuckerberg, published to Facebook on Thursday, should set off new alarm bells for journalists, and heighten news organizations’ sense of urgency about how they—and their industry—can survive in a Facebook-dominated world. Facebook’s existing threat to journalism is well established. It is, at its core, about the flow of the advertising dollars that news organizations once counted on.

Building Global Community. Renewing Medium’s focus – 3 min read. We’ve decided to make some major changes at Medium. I’ll start with the hard part: As of today, we are reducing our team by about one third — eliminating 50 jobs, mostly in sales, support, and other business functions. We are also changing our business model to more directly drive the mission we set out on originally.

Obviously, this is a tough thing to do, made tougher by the immense respect and love we have for these people who have helped make Medium what it is today. International - Facebook’s secret rules of deletion. By Till Krause und Hannes Grassegger Facebook refuses to disclose the criteria that deletions are based on. SZ-Magazin has gained access to some of these rules. We show you some excerpts here – and explain them. Introductory words These are excerpts of internal documents that explain to content moderators what they need to do. Demographics of Social Media Users in 2016. Facebook usage and engagement is on the rise, while adoption of other platforms holds steady Over the past decade, Pew Research Center has documented the wide variety of ways in which Americans use social media to seek out information and interact with others. A majority of Americans now say they get news via social media, and half of the public has turned to these sites to learn about the 2016 presidential election.

Americans are using social media in the context of work (whether to take a mental break on the job or to seek out employment), while also engaging in an ongoing effort to navigate the complex privacy issues that these sites bring to the forefront. In addition to measuring the broad impact and meaning of social media, since 2012 the Center has also tracked the specific sites and platforms that users turn to in the course of living their social lives online.

What follows is a deeper examination of the current state of the social media landscape in America. This country is waging a war against Facebook. In the latest chapter of the "fake news" saga, Facebook is now facing off against an entire country as German officials want to fine the social media platform for every fake story that makes its way to the newsfeed. Thomas Oppermann, party chairman of the Social Democratic Party, told Der Spiegel that because Facebook hasn't gotten its act together yet despite knowing fake news and hate messages proliferated on the site, the company should be subject to a €500,000 fine ($523,320). The threats come just as Facebook announced new tools to fight the spread of fake news, including an option for users to flag fake news and third-party fact-checking with help from the Poynter International Fact Checking Network.

Contenus : Snapchat préfère acheter que partager. Facebook Admits It Messed Up More Ad Metrics. The End of Digital Advertising as We Know It. Facebook has said that “ad load,” or the relative volume of advertising versus content on its pages, isn’t going to be able to fuel revenue growth as much as it has to date. The disclosure indicates that the display-ad business model – which has largely been the industry standard for monetizing content on the internet — may be tapped out. When Facebook reported its third quarter earnings, CFO Dave Wehner outlined how ad load is going to be less effective in the very near future. “We continue to expect that ad load will play a less significant factor driving revenue growth after mid-2017.

Over the past two years we have averaged about 50% revenue growth in advertising. Ad load has been one of the three primary factors fueling that growth,” explained Wehner on a November 2 conference call. It's Tough to Make High-Quality Native Content. September 19, 2016 Many marketers are hopeful that native content creation will seamlessly integrate their messaging with what consumers are already reading and watching on social channels.

But there are growing pains. Facebook in talks to create original scripted and sports shows. David Ramos / Stringer / Getty Facebook has announced it is in talks with TV studios and video producers about licensing shows, with the hope of improving its video content. Ricky Van Veen, the social network’s head of global creative strategy, is leading the discussions, which include plans for scripted shows, game shows and sports. Van Venn said in a statement that Facebook’s goal is to “kickstart an ecosystem of partner content,” which is why it is exploring original shows and sports content. Facebook's move into publishing is 'dangerous, but interesting' Les premiers « Instant Articles » sont apparus sur Facebook.