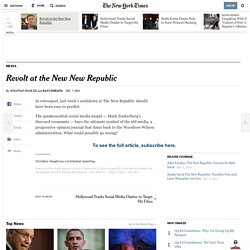 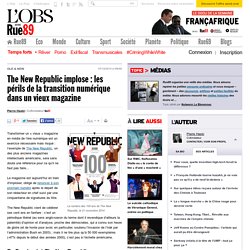 The Myth of the ‘Liberal’ New Republic. In March 1974 the New York Times ran a small story in its front section headlined, “Harvard Lecturer Buys New Republic for $380,000.”

The lecturer was named Martin Peretz, a well-known radical activist married to a wealthy heiress who had helped bankroll Eugene McCarthy’s 1968 presidential campaign and donated $25,000 to George McGovern in 1971 in the expectation that he would end the Vietnam war and “turn the country toward social justice.” 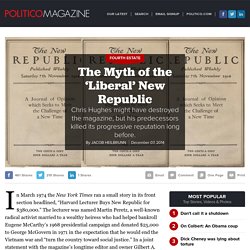 In a joint statement with the magazine’s longtime editor and owner Gilbert A. Harrison, Peretz announced that he planned no real changes in the magazine’s staff or its ideological direction. Two years later Harrison, as Eric Alterman has reported in his essential book Sound and Fury, arrived at the New Republic’s elegant nineteenth street townhouse to find his belongings unceremoniously dumped in the hallway. Ultimately Peretz did indeed decide where he wanted to go: toward the right, and away from liberalism. Don’t believe a word of it. Les tourments de « The New Republic » TNR veterans protest Hughes' 'destruction' Three former editors of The New Republic -- Hendrik Hertzberg, Peter Beinart and Andrew Sullivan -- have joined more than a dozen of their fellow TNR veterans in protesting the "destruction" of the magazine at the hands of owner Chris Hughes. 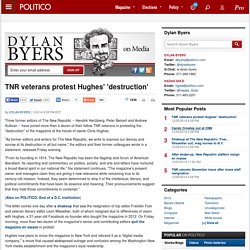 "As former editors and writers for The New Republic, we write to express our dismay and sorrow at its destruction in all but name," the editors and their former colleagues wrote in a statement, released Friday evening. "From its founding in 1914, The New Republic has been the flagship and forum of American liberalism. Its reporting and commentary on politics, society, and arts and letters have nurtured a broad liberal spirit in our national life," the statement continues. "The magazine’s present owner and managers claim they are giving it new relevance while remaining true to its century-old mission.

Instead, they seem determined to strip it of the intellectual, literary, and political commitments that have been its essence and meaning. After shake-up, New Republic staffers resign en masse. The majority of The New Republic's masthead resigned en masse on Friday following the owner's decision to force out the editorial leadership, move the magazine to New York, and rebrand the venerable, century-old publication as a "digital media company. 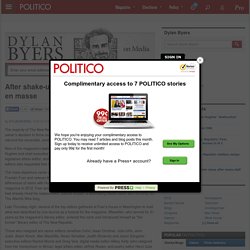 " Nine of the magazine's twelve senior editors submitted letters of resignation to owner Chris Hughes and chief executive Guy Vidra, as did two executive editors, the digital media editor, the legislative affairs editor, and two arts editors. At least twenty of the magazine's contributing editors also requested that their names be removed from the magazine's masthead. The mass departure came one day after a shakeup that saw the resignation of top editor Franklin Foer and veteran literary editor Leon Wieseltier, both of whom resigned due to differences of vision with Hughes, a 31-year-old Facebook co-founder who bought the magazine in 2012. Shakeup at TNR: Foer, Wieseltier out; mag moves to N.Y. Franklin Foer and Leon Wieseltier, the top two editors at The New Republic, quit on Thursday amid a shakeup that will relocate the Washington-based magazine to New York City, sources there told POLITICO on Thursday. 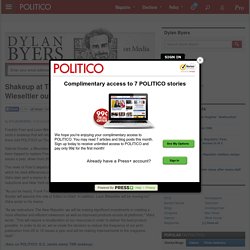 Gabriel Snyder, a Bloomberg Media editor who previously served at The Atlantic Wire, has been tapped to replace Foer as editor. The magazine will also reduce its print schedule to 10 issues a year, down from 20. The news of Foer's departure was first confirmed by Foer, the editor, in a memo to staff in which he cited differences of vision with owner Chris Hughes and chief executive Guy Vidra. Vidra later sent a memo to staff confirming Foer and Wieseltier's departure, as well as the staff reductions and New York relocation. "As you’ve heard, Frank Foer is leaving the company. "As we restructure The New Republic, we will be making significant investments in creating a more effective and efficient newsroom as well as improved products across all platforms," Vidra wrote. TNR cancels December issue after mass staff resignation. The New Republic will not publish the issue that had been slated to hit shelves on December 15, following Friday's mass resignation by top editors and contributors. 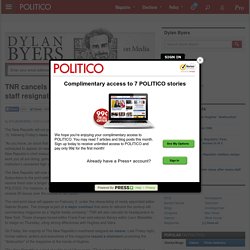 "As you know, an issue that was in production by recently departed editors and writers, scheduled to appear on newsstands on December 15th, was left unfinished," Guy Vidra, the New Republic's chief executive, wrote in a memo to staff on Saturday. "Despite the incredible work you all are doing, going forward with the issue would run the risk of falling short of this institution’s renowned high standards. " The New Republic will now move to a 10-issue-per-year publishing schedule, down from 20. Subscribers to the print edition will receive the total number of issues they've paid for, but will receive them over a longer period of time, a spokesperson for Hughes and Vidra told POLITICO. For instance, a subscriber who just signed up for a one-year subscription will now receive 20 issues over the course of two years.

Implosion of a Washington institution.