Israeli socialist activist Tikva Honig-Parnass fought in the 1948 War as a Zionist. Years later she would break with Zionism and join the ranks of the Socialist Organization in Israel, also known by the name of its publication, Matzpen (“Compass”).

Matzpen distinguished itself as a Marxist anti-Zionist group that was active in Israel during the 1960s and 1970s. The group called for the solution of the Israeli-Palestinian conflict in a regional framework that would involve the unification of the Arab East under a socialist and democratic banner, while also granting Palestinian Arabs and Israeli Jews equal individual, as well as equal collective national rights. Matzpen exists today as a network of individuals in Israel as well as abroad. Its theory and analysis can be found under a website with the same name.
After obtaining a Ph.D in sociology from Duke University in the United States, Tikva returned to Israel where she has been active in various anti-occupation, Mizrahi and feminist movements. For 11 years (in the last 2 years along Palestinian activist Toufic Haddad) she was the chief editor of News from Within, a publication of the Alternative Information Center in Jerusalem. Together they co-edited the journal Between The Lines, and later they wrote a book entitled “Between the Lines” – Readings on Israel, The Palestinians and the U.S. “War On Terror”. She is currently working on a new book about the Zionist Left, False Prophets of Peace: Liberal Zionism and the Struggle for Palestine.

A Hollow Democracy. Our new issue, “Between the Risings,” is out now. 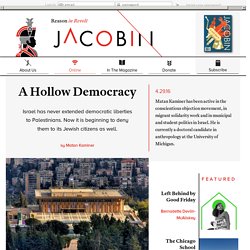 To celebrate its release, international subscriptions are $25 off, and limited prints of our Easter 1916 cover are available. The “Jewish and democratic” State of Israel has always been, as Palestinian-Israeli politician Ahmed Tibi quips, “democratic for the Jews, and Jewish for the Arabs.” The Nakba, during which hundreds of thousands of Palestinians were expelled from their homes, and the Law of Return, which allowed for immediate naturalization for all Jews that immigrated to Israel, turned the Palestinian citizens of Israel into a persecuted minority. After the 1967 war, Palestinians living in the rest of Palestine were deprived of all political rights, with millions of Palestinian refugees and their descendants denied the right to return to their homes.

Indeed, until recently it has been possible for Israelis and sympathetic observers to “deduct the Arabs” and portray Israel as a normally functioning Western democracy. Ashkenazis, it is time to acknowledge our racism. The easiest way to avoid being called racist is to only hang out with Ashkenazis. 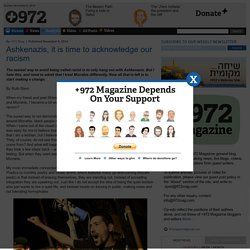 But I hate this, and need to admit that I treat Mizrahis differently. Now all that is left is to start making a change. By Ruth Stern When my friend and poet Shlomi Hatuka asked me to write something about Ashkenazis and Mizrahis, I became a bit worried. How will I write without people seeing my own racism? The surest way to not demonstrate one’s racism is by avoiding. My most immediate connection with what is happening today with the Mizrahis of Ars Poetica (a monthly poetry and music event, which features many up-and-coming Mizrahi poets) is that instead of erasing themselves, they are standing out. Mizrahi activists protest outside Finance Minister Yair Lapid’s house, north Tel Aviv. That question of “why are you raising such a stink?” I’d like to say a few things about my own racism. I noticed that when I pass a dark-skinned person on the street, I will make less room for him or her to pass.

Old Yishuv: Palestine at the End of the Ottoman Period. From 1840 onward (i.e., from the time that the Ottoman Empire regained Palestine from Egyptian rule) the Jewish community of Palestine began to expand at an ever-increasing pace. 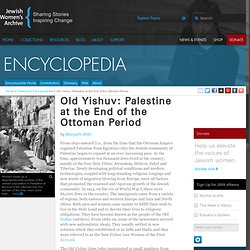 At the time, approximately ten thousand Jews lived in the country, mainly in the four Holy Cities: Jerusalem, Hebron, Safed and Tiberias. Newly developing political conditions and modern technologies, coupled with long-standing religious longings and new winds of migration blowing from Europe, were all factors that promoted the renewed and vigorous growth of the Jewish community. In 1914, on the eve of World War I, there were 86,000 Jews in the country. The immigrants came from a variety of regions, both eastern and western Europe and Asia and North Africa. Both men and women came mainly to fulfill their wish to live in the Holy Land and to devote their lives to religious obligations. Israeli Writer-Activist Tikva Honig-Parnass, Who Fought for Israel’s Founding in 1948, on 60 Years of Palestinian Dispossession and Occupation. New book deconstructs myth that the Zionist left wants peace. Anti-Zionist scholar, writer and longtime activist Tikva Honig-Parnass’s new book False Prophets of Peace: Liberal Zionism and the Struggle for Palestine critically analyzes Israel’s left. 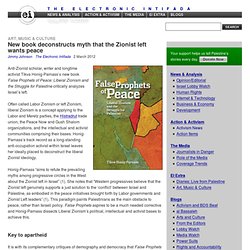 On the Apartheid nature of Israel, Matzpen and the contradictions of the Zionist Left -The Flying Carpet Institute interviews Israeli socialist Tikva Honig-Parnass.