Glogin?URI= To save articles or get newsletters, alerts or recommendations – all free. 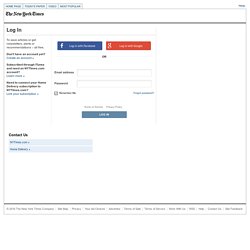 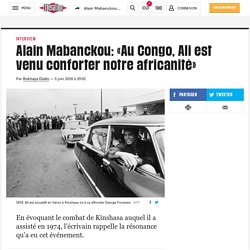 Muhammad Ali was The Greatest. 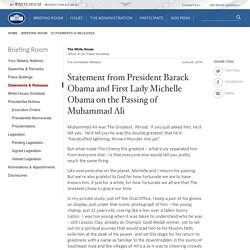 Period. If you just asked him, he’d tell you. He’d tell you he was the double greatest; that he’d “handcuffed lightning, thrown thunder into jail.” But what made The Champ the greatest – what truly separated him from everyone else – is that everyone else would tell you pretty much the same thing. Like everyone else on the planet, Michelle and I mourn his passing.

In my private study, just off the Oval Office, I keep a pair of his gloves on display, just under that iconic photograph of him – the young champ, just 22 years old, roaring like a lion over a fallen Sonny Liston. “I am America,” he once declared. That’s the Ali I came to know as I came of age – not just as skilled a poet on the mic as he was a fighter in the ring, but a man who fought for what was right. He wasn’t perfect, of course. Muhammad Ali shook up the world. Le livre. UK. Über boxen. De la boxe. Del boxeo. On Boxing (japanese) On Boxing. The Cruelest Sport. And if the body does not do fully as much as the soul? 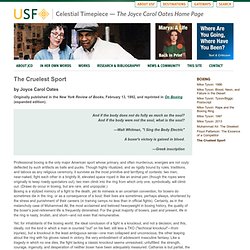 And if the body were not the soul, what is the soul? —Walt Whitman, "I Sing the Body Electric" A boxer's victory is gained in blood. —Greek inscriptionProfessional boxing is the only major American sport whose primary, and often murderous, energies are not coyly deflected by such artifacts as balls and pucks. Though highly ritualized, and as rigidly bound by rules, traditions, and taboos as any religious ceremony, it survives as the most primitive and terrifying of contests: two men, near-naked, fight each other in a brightly lit, elevated space roped in like an animal pen (though the ropes were originally to keep rowdy spectators out); two men climb into the ring from which only one, symbolically, will climb out.

This is because boxing's mimesis is not that of a mere game, but a powerful analogue of human struggle in the rawest of life-and-death terms. [Ali] discovered something which was both very good and very bad. Mike Tyson: 1986. By Joyce Carol Oates Originally published as "Kid Dynamite: Mike Tyson is the most exciting heavyweight fighter since Muhammad Ali" in Life, March, 1987. 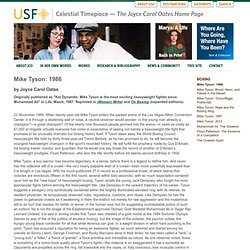 Reprinted in (Woman) Writer and On Boxing (expanded editions). 22 November 1986. When twenty-year-old Mike Tyson enters the packed arena of the Las Vegas Hilton Convention Center, it is through a deafening wall of noise. Muhammad Ali: "The Greatest" I was determined to be one nigger that the white man didn't get. 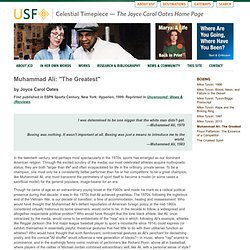 —Muhammad Ali, 1970 Boxing was nothing. It wasn't important at all. Boxing was just a means to introduce me to the world. —Muhammad Ali, 1983 In the twentieth century, and perhaps most spectacularly in the 1970s, sports has emerged as our dominant American religion. Though he came of age as an extraordinary young boxer in the 1960s, and made his mark as a radical political presence during that decade, it was in the 1970s that Ali achieved greatness. Viewed from the perspective of the new century, the 1970s was a transitional period in which, in a sense, a New Era of sports was born. On Boxing 2. Browse Inside On Boxing. The Fighter’s Cruel Art. The Fighter might more accurately have been titled The Fighter and His Family: it’s a boisterous, brilliantly orchestrated ensemble piece at the paradoxically near-still center of which is an Irish-American boxer (Mark Wahlberg), whose once-promising career, like his grim hometown, Lowell, Massachusetts, is on what appears to be an inevitable downward spiral. 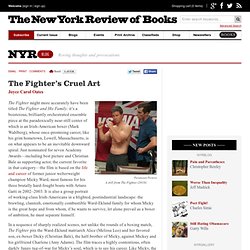 Just nominated for seven Academy Awards—including best picture and Christian Bale as supporting actor, the current favorite in that category—the film is based on the life and career of former junior welterweight champion Micky Ward, most famous for his three brutally hard-fought bouts with Arturo Gatti in 2002–2003. Boxing.