Genetically Modified Foods. Can you think of some possible risks of growing plants that contain genes from other organisms? 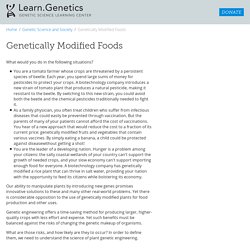 Let's examine our earlier examples: the beetle-resistant tomato, the vaccination banana, and the saltwater rice plant. We've already covered the potential advantages of these plants, but what are the concerns? Cross-breeding with wild populations. For all of these examples, a primary concern is preventing genetically modified versions from mixing with the naturally existing populations of plants from which they're derived. Plants rely on the transfer of pollen, via insects or the air, to breed and produce offspring, and it's difficult to control how they cross-breed in the wild. In most cases, it's not yet clear how introduction of the non-native gene would affect wild populations. Toxicity or allergic reactions. When farmers start growing genetically modified crops, they stop growing the old varieties. Genetically modified crops are the future and must not be blocked, say scientists. Blight is the number one threat to the six million tonnes of potatoes produced in Britain each year and was responsible for the Irish Famine of 1840s. 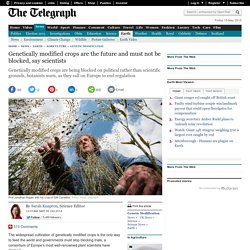 But European approval is needed for commercial cultivation and so far the Council of Ministers has vetoed every application. Prof Jones said: “It’s incredibly frustrating. It deters scientists from doing the work in the first place because they know that it won’t get approved. “Even when the science is approved by the European Food Standards Agency, it goes to the Council of Ministers who are inevitably split on political grounds and then it stalls. “Britain is fairly enlightened compared with the rest of Europe and will allow initial trials, but Europe cannot seem to get its ducks all in a row so we can move forward.”

GM crops have polarised opinion since they were first produced by American scientists in 1982. Most scientists now agree that there is little evidence to suggest that crops are dangerous to humans or the environment. Countries with bans on human cloning and/or genetic engineering. China shocks world by genetically engineering human embryos. "This news emphasises the need for an immediate global ban on the creation of GM designer babies,” said Human Genetics Alert Director, Dr David King. 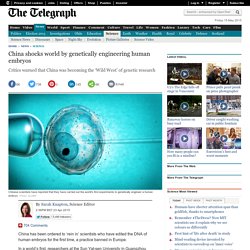 “It is critical that we avoid a eugenic future in which the rich can buy themselves a baby with built-in genetic advantages. “It is entirely unnecessary since there are already many ethical ways to avoid thalassaemia. This research is a classic example of scientific careerism - assuring one's place in the history books even though the research is unnecessary and unethical. " • Three parent babies: House of Lord approves law despite fears babies could be sterile The team has used a gene-editing technique known as CRISPR/Cas9 which was discovered by scientists at MIT.

It works by capitalising on the fact that bacteria attack viruses by snipping away part of their genetic code, effectively dismembering the virus. The technique has been used in adult cells and animal models but never in human embyos. GM Education - citizens concerned about GM. Making sense of science and evidence. A timeline of information about the discoveries and advances made in genetics. 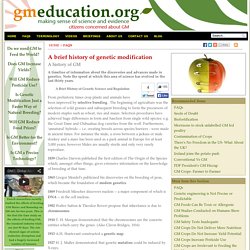 Note the speed at which this area of science has evolved in the last thirty years. A Brief History of Genetic Science and Regulation From prehistoric times crop plants and animals have been improved by selective breeding. The beginning of agriculture was the selection of wild grasses and subsequent breeding to form the precursors of modern staples such as wheat, rice and maize. Selection procedures have achieved huge differences in form and function from single wild species: e.g. the Great Dane and Chihuahua dog varieties from the wolf. 1859 Charles Darwin published the first edition of The Origin of the Species which, amongst other things, gives extensive information on the knowledge of breeding at that time. 1865 Gregor Mendel's publicised his discoveries on the breeding of peas, which became the foundation of modern genetics. 1902 Walter Sutton & Theodor Boveri propose that inheritance is due to chromosomes. UNL's AgBiosafety for Educators. What is genetic engineering? 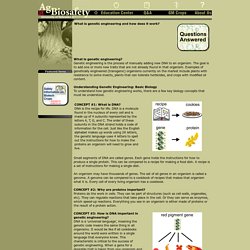 Genetic engineering is the process of manually adding new DNA to an organism. The goal is to add one or more new traits that are not already found in that organism. Examples of genetically engineered (transgenic) organisms currently on the market include plants with resistance to some insects, plants that can tolerate herbicides, and crops with modified oil content. Understanding Genetic Engineering: Basic BiologyTo understand how genetic engineering works, there are a few key biology concepts that must be understood.