Finding and Using Images from the Web. This article includes modified content from Where to Find Free Images and Visuals for My Blog by Robin Good. 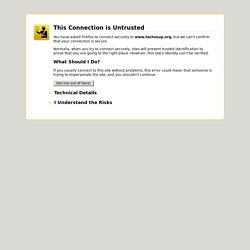 To a struggling nonprofit or charity in need of images for its website or printed materials, the Internet might seem like one giant, free photo bank. But using copyrighted images without permission is illegal (yes, even if you're using them for a good cause). There are plenty of places online to obtain images you can use legally. We'll show you some of these, but first, it's important to learn a few guidelines for using images obtained from the Internet. Copyrighted Images: Don't Use Without Permission Copyright is the legal protection extended to the authors or owners of original published and unpublished artistic and intellectual works. 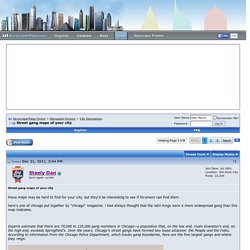 They had some of the best graffiti in Chicago. In a way, I miss the elaborate gang graffiti of the 70’s (but not the gangs….not at all). Yeah, the gaylords are gone. People V. Folks Defined - People  (Latin Kings)  V. Folks ( Latin/Gangster Disciples)  United States. 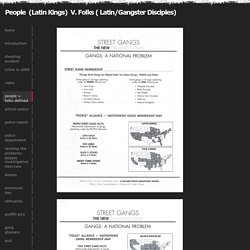 Chicago Police Department. ChicagoGangs.org Website. The Folk and People nations were founded in the year 1978 within the correctional facility in . 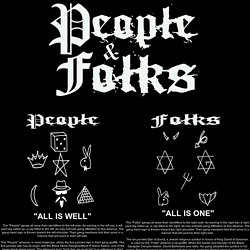 The forming of the Folk and People nation was destined to happen because there were already alliances going on in the streets prior to1978. There were alliances within African American gangs like the Black P Stone alliance, and the Black Gangster Disciple alliance. Or alliances between Vice Lords and Black P Stones and Mickey Cobras. White gangs had alliances such as the White Power Organization (WPO) or the United Fighting Organization (UFO), or the alliance between Simon City Royals and Insane Popes. In Loco Politico. It was briefly before the summer of 2012 when then 16 year-old rapper Chief Keef (birth name Keith Cozart) burst into the “drill” music scene. 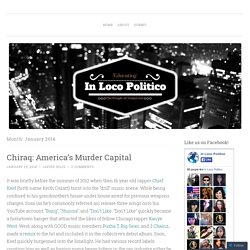 While being confined to his grandmother’s house under house arrest for previous weapons charges, Sosa (as he’s commonly referred as) release three songs onto his YouTube account: “Bang“, “3hunna“, and “Don’t Like. “Don’t Like” quickly became a hometown banger that attracted the likes of fellow Chicago rapper Kanye West. West, along with GOOD music members Pusha T, Big Sean, and 2 Chainz, made a remix to the hit and included it in the collective’s debut album. Soon, Keef quickly burgeoned into the limelight. He had various record labels courting him as well as having many heavy hitters in the rap industry either be featured on his songs or feature him in theirs. Keef’s raps deal with the dark and violent underbelly of mainstream American society.

Chicago Gang Violence: By The Numbers. ColorCombo103 with Hex Colors #AA1111 #FFFFFF #EBEBEB #000000. Gang Awareness. What can be done to stop or control gangs? 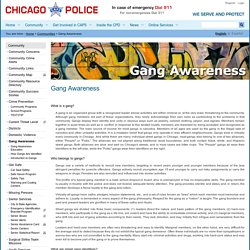 The more aware the community is, the better prepared it is to deal with gang problems. The Chicago Police Department holds frequent workshops on gangs and gang awareness throughout the City. These workshops and discussions will help you learn how to recognize gang behavior in your children, how to cope, and how to fight back. Call the Preventive Services Section at 747-5490 to arrange a gang workshop in your community. The best defense against gangs begins in the home. Demographics. Age of Gang Members Respondents provided information regarding the estimated ages of gang members in their jurisdictions. 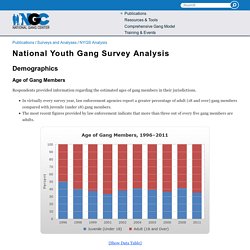 In virtually every survey year, law enforcement agencies report a greater percentage of adult (18 and over) gang members compared with juvenile (under 18) gang members. The most recent figures provided by law enforcement indicate that more than three out of every five gang members are adults. [Show Data Table] Analysis for this section pertains only to law enforcement agencies reporting gang problems. Age of Gang Members by Area Type. The 6 Most Gang Infested Cities in America. It is estimated that over 1.5 million people are members of the roughly 35,000 different gangs operating in the United States. 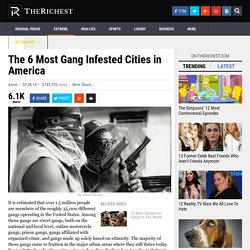 Among those gangs are street gangs, both on the national and local level, outlaw motorcycle gangs, prison gangs, gangs affiliated with organized crime, and gangs made up solely based on ethnicity. The majority of these gangs came to fruition in the major urban areas where they still thrive today. Even relatively safe cities crime wise such as New York or Los Angeles (relative to the most dangerous U.S. cities) have no shortage of gangs vying for territory while carving their own niche in illicit trade. While gangs are by no means exclusive to America, far from it, when one hears of violence in a major city the typical reaction “it’s probably gang related” echoes across the populace. 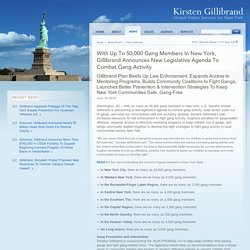 Senator Kirsten Gillibrand is announcing a new legislative agenda to combat gang activity, keep at-risk youth out of gangs, and keep our communities safe and economy growing. Senator Gillibrand’s plan increases resources for law enforcement to fight gang activity, toughens penalties for gang-related offenses, expands access to effective mentoring programs to keep children out of gangs, and brings community leaders together to develop the right strategies to fight gang activity in local communities across New York. By the numbers: Chicago-area gangs. Chicago is the gang capital of the United States. 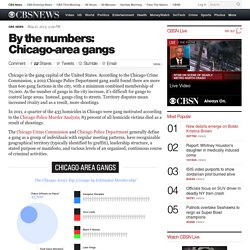 According to the Chicago Crime Commission, a 2012 Chicago Police Department gang audit found there are more than 600 gang factions in the city, with a minimum combined membership of 70,000. As the number of gangs in the city increase, it's difficult for gangs to control large areas. Instead, gangs cling to streets. Territory disputes mean increased rivalry and as a result, more shootings. - Gale - Enter Product Login. Crime in Chicagoland. Tracking homicides in Chicago - Tracking homicides in Chicago.

Educational Psychology. Datawrapper. Datawrapper. Statistics. All statistics come from these articles and websites. Click to open. If there is info you can't find, send a question using box to the right. Facts.pdf. Gangs: Slang, Words, Symbols. Criminal street gangs in America have been in existence for centuries. The initial reason for their formation was to strengthen ethnic and racial solidarity. These gangs (e.g., African-American, Irish, Italian, Hispanic/ Latino) formed in the neighborhoods they identified with and defended. They were territorial, causing tension with other neighborhood gangs. The Crips and Bloods started as street fighters defending their neighborhoods, only to become more dominant, organized, defined and identifiable in the late 1960s. They evolved into notorious, ultra-violent and criminally successful street gangs, posing a major threat to Los Angeles.

[ CHICAGOGANGS.ORG ] GANG HAND SIGNS. Hand signals are used by gangs as a means of communicating gang affiliation and/or as a challenge to rival gang members, called “throwing signs.” These signals or signs are made by forming letters or numbers with the hands and fingers, depicting the gang symbol or initials. By using these signals, the gang member can show to which gang he belongs and issue challenges to other gangs in the vicinity.

"Throwing up" a gang sign with the hands is one of the most known and obvious forms of "claiming. " It is used in many situations where other identifiers may not be possible or appropriate, and can also show that a gang member is in the area to "do business" as opposed to just passing through. Usually these signs are made by formation of the fingers on one or both hands to make some sort of symbol or letter. False Flagging - This can be defined in a number of ways. DISCLAIMER: The images representing the hand signs on the following pages are for information purposes only. Cook County Gangs: Symbols, Colors & Hand Signs. N. F. A. N. C. - Gangs. The word "gang" conjures up many different images and feelings.

The definition of "gang" that we will be using is "three or more persons with common interests, bonds and activities characterized by criminal or delinquent conduct. " However, the definition alone cannot raise awareness or dispel myths and fears. We need information such as why our youth join gangs, signs to look for, and suggestions on how to curtail gang involvement. Gang presence directly affects the quality of life in our community through such things as truancy, criminal behavior, and alcohol and other drug use and abuse.

We need to look at the structure of a gang, it's potential attractiveness for young people, and what parents and community members can possibly do. Community_Graffiti_Information_Bulletin.pdf. » Deciphering Gang Graffiti - Entropic Memes. Where graffiti is concerned, the writing truly is “on the wall”. It’s an annoyance, to be sure, but it’s also somewhat interesting – at least the gang-related graffiti, anyway. Initiation - by:   richard   flores. Stories of Gang Initiation that Will Make You Think Twice. Into the Abyss: The Structure of Gangs. I don't know if gangs are the next wave of organized crime in the United Status or not. Research conducted by Decker, Bynum, and Weisel suggests that this is not the case, or that it has been exaggerated in the press. Murder by structure: dominance relations and the social structure o... Gangs 101. Of the many issues that gangs of the 90's have addressed, in their own fashion, the one that has, and will continue to have, the most impact on the American Community, is the expansion of gang enterprise.

Not only is gang enterprise an increasingly acceptable means of illegal income, it is also another profound statement of counter-rejection by young people to the larger society. According to national statistics, about 95% of hard core gang members are high school drop-outs. Unique street gang culture thrives in the “Windy City” As I have been looking at the phenomenon of street gangs in urban areas of our nation, there is none quite as unique as Chicago. Gang and Security Threat Group Awareness. People Nation and Folk Nation. Diane Sawyer Reports “Hidden America: Don’t Shoot, I Want to Grow Up” Oct 17, 2012 2:12pm. Gangs - Adolescence, Activities, and Drug - JRank Articles. Chicago Gang Territory vs 2011 Chicago Homicides. Chicago 'Heroin Highway' Bust Shows A 'New Face Of Organized Crime'