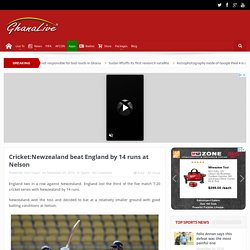 England lost the third of the five match T-20 cricket series with Newzealand by 14 runs. Newzealand won the toss and decided to bat at a relatively smaller ground with good batting conditions at Nelson. Newzealand beat England by 14 runs in third T-20 match at Nelson Guptil and Grandhomme were the top scorers for Newzealand. Grandhomme scored a rapid-fire 55 runs which included five fours and three sixes. England made a solid start but lost the plot in the middle and eventually lost by 14 runs. Efia Odo finally reveals why she left Revloe - Ghana Live TV. Ghanaian well-known actress, Efia Odo has finally revealed why she broke up with her boyfriend, Revloe after even proposing him. 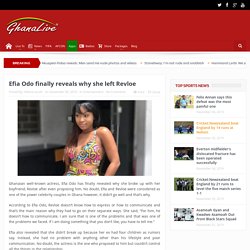 No doubt, Efia and Revloe were considered as one of the power celebrity couples in Ghana however, it didn’t go well and that’s why. According to Efia Odo, Revloe doesn’t know how to express or how to communicate and that’s the main reason why they had to go on their separate ways. She said, “For him, he doesn’t how to communicate, I am sure that is one of the problems and that was one of the problems we faced. Stonebwoy: I’m not rude and snobbish - Ghana Live TV. Self-acclaimed prince of dancehall, Stonebwoy pleaded all fans and media personalities to not label him as a rude guy. 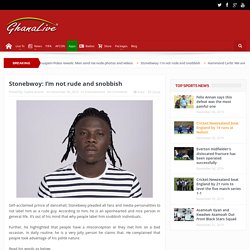 According to him, he is an openhearted and nice person in general life. It’s out of his mind that why people label him snobbish individuals. Further, he highlighted that people have a misconception or they met him on a bad occasion. In daily routine, he is a very jolly person he claims that. Wendy Shay and Fantana beef in a nutshell-GhanaLive TV. Ghanaian entertainment/music industry is absolutely amazing when it comes to giving striking content to the audience. 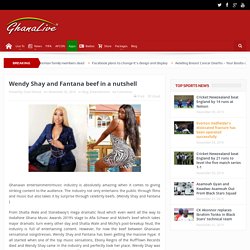 The industry not only entertains the public through films and music but also takes it by surprise through celebrity beefs. (Wendy Shay and Fantana ) From Shatta Wale and Stonebwoy’s mega dramatic feud which even went all the way to Vodafone Ghana Music Awards 2019’s stage to Afia Schwar and Mzbel’s beef which takes major dramatic turn every other day and Shatta Wale and Michy’s post-breakup feud, the industry is full of entertaining content.

However, for now the beef between Ghanaian sensational songstresses, Wendy Shay and Fantana has been getting the massive hype. It all started when one of the top music sensations, Ebony Reigns of the RuffTown Records died and Wendy Shay came in the industry and perfectly took her place. Breast Cancer Deaths - Your Boobs or Your Life? GhanaLive TV. According to one of the victim’s personal experiences that Half-year as a few balms and antitoxins didn’t help. 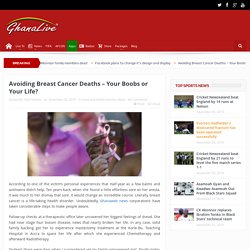 Ten years back, when she found a little effortless sore on her areola. It was much to her dismay that sore. It would change an incredible course. Literally, breast cancer is a life-taking health disorder. Undoubtedly, Ghanaweb news corporations have taken considerable steps to make people aware. Follow-up checks at a therapeutic office later uncovered her biggest feelings of dread. A Lady Warns School Girls To Have Sugar Daddies - Ghana Live TV. A Nigerian woman has sent a significant message to little youngsters still in optional school. 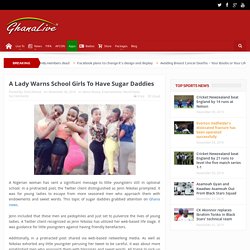 In a protracted post, the Twitter client distinguished as Jenn Nikolas prompted. It was for young ladies to escape from more seasoned men who approach them with endowments and sweet words. This topic of sugar daddies grabbed attention on Ghana news.Jenn included that these men are pedophiles and just set to pulverize the lives of young ladies. Habits, Sins Of Past Economic Managers No More Being Visited On Ghanaians – Akufo-Addo - Ghana Live TV. The first gentleman of the land, Nana Addo Dankwa Akufo-Addo clarified that under his rule there is no room for mismanagement. 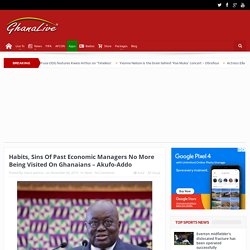 He highlighted how poorly past governors handled Ghana. Further he promised that Ghanaians will not experience the same thing. “Demonstrate its commitment and determination. To ensuring that the habits and sins of past managers. Our public finances are no longer visiting on this future generations. He bragged about the latest achievement that Ghana is the second country to establish a Fiscal Council. “I am committed to fiscal rectitude becoming an essential feature of our DNA. Efia Odo: My mother ‘knows my character’ - Ghana Live TV. The bold and curvy actress cum model, Andrea Owusu in the showbiz industry known as Efia Odo opened that her parents are well aware of character and nature. 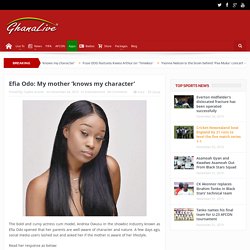 A few days ago, social media users lashed out and asked her if the mother is aware of her lifestyle. Read her response as below: “It’s not a matter of whether they like my behavior or not, I am their daughter and they know my character. She supports me in everything I do. Even when I was coming for the interview, I had face time with her and she said I should enjoy.” The actress is popular for her controversial character. Is Juliet Ibrahim under major backlash?-Ghana Live TV.

Ghanaian/Nollywood well-known actress, Juliet Ibrahim who was in the highlights for past few weeks for opening up about her personal life is under major backlash for the lies that she told by mixing them with some of the realities. 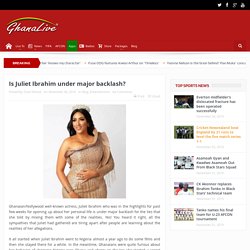 Yes! You heard it right, all the sympathies that Juliet had gathered are tiring apart after people are learning about the realities of her allegations. It all started when Juliet Ibrahim went to Nigeria almost a year ago to do some films and then she stayed there for a while. In the meantime, Ghanaians were quite furious about her behavior of choosing Nigeria over Ghana and cherry on the top she started a secret relationship with a Nigerian rapper, Iceberg Slim.

15 Year Old Girl Sexually Abused By A Hairstylist-Ghana Live TV. A hairdresser who has been asserted for sexually abused a 15 year old girl.

It happened during school hours at Osu. The suspect has been put under the steady gaze of an Accra Circuit Court. Ghana Introduced Sex Education In Basic Schooling. After so many controversies at last now the Ghana Education System has been introduced to sex education. This teaching topic is added to the curriculum in the basic school’s study. The basic reason to introduce it to aware children from bad touch and abuse. Moreover, pupils have to understand and experience their sexuality. Ghana news also broadcasting it as a good initiative. Expectedly, it is going to be implemented on upcoming terms in the schools of Ghana. As of now, portions of the CSI rule modules are contemplated in the lesser and senior secondary schools. Asamoah Gyan and Kwadwo Asamoah Out From Black Stars Squad. There is the big Ghanaweb news for all the African football fans that their well-known footballers dropped in qualifying.

Afia Drops Her Hilarious Version of Comprehensive S*X Education - Ghana Live TV. The controversial actress cum model, Valentina Nana Agyeiwaa is better known as Afia Schwar dropped her ‘own funny version of s*x education.’ A few days ago, the comedian announced that from now everyone will address her with name Queen Afia Schwar. She knew very well how to steal social media attention. Her minor move becomes trending in a few seconds. Broke man cheating on you annoying - Cookie- Ghana Live Tv. Any man attempting to win the core of TV star Cookie must be stacked on the grounds. Basically, host of Tales From The Powder Room on GHOne says she won’t settle down with a broke man.

Ghana media in race to provide current news in Ghana at your doorsteps. Ghana is a country of West African origin. People of Ghana are fond of music, festivals and are always ready to lead a life bursting with all modes of entertainment and recreation. Satellite digital channels and online media are a healthy source of recreation and entertainment. People get stuck to their Television and can look out for their most favorite mode of entertainment, education, recreation or news. Instagram Sensation Naa Dromor Adjei Unexpectedly Died. The death of the victim is seriously unexpected because she was young.

Moreover, there was not such an accident or incident happened before her death. Buttocks Surgery trending in Ghanaian actresses? The trends in Ghanaian celebrities change on a daily basis when the actors/artists get themselves busy in beef, on the other hand, the actresses/songstresses find any other trend to stay in the limelight. Shatta Wale Gets the Biggest Birthday Surprise of his Life. Ghanaian internationally acclaimed celebrities who are living the dream by having unlimited cash and hit content in their pockets seem to be the happiest people on Earth. However, as they say money can’t buy everything, it turned out that it’s not the case at all. All the celebrities are struggling in one of the aspects of their lives just like common folks.

Ghana Partnering UK “Time to Change Bad Health In Ghana” Mental health problems are an issue for people living in all parts of the globe. Feelings like isolation, exclusion, and lack of their basic human rights. Especially mental health in Ghana as it is a developing country, a major unseen problem. Yvonne Nelson heart-wrenching story of how she became an actress. There is no doubt in the fact that the Entertainment Industry is not an easy place to survive and become successful in it is another story.

It takes tons of secretive efforts to become a star out of the hell-hole called the Entertainment Industry. Shugatiti Seriously Needs A Sugar Daddy-Ghana Live Tv. Afia Schwarzenegger calls on National Media Commission to sanction Kennedy Agyapong - Ghana Live TV. Russia-Africa Summit: Putin calls deepening ties with Africa as one of top priorities - Ghana Live TV. Russian President, Vladimir Putin has greeted African leaders on two-day maiden Russia-Africa Summit to indicate its growing role in the region and also says deepening ties with African countries as one of the top priorities of Russia.

More than 3,000 representatives from both Russia and Africa traveled to Russian to attend the two-day summit. Kofi Kapito remarks about Serwaa Amihere's butt made her popular? In my last blog, I talked about how the Chief Executive Officer of Consumer Rights Protection Agency, Kofi Kapito was exposed by the well-known TV host, Serwaa Amihere as a major harasser. However, to my surprise, some of the people have started thinking that Kofi Kapito has made Serwaa popular by talking about her butt in public. Ghanaian Celebrities who Fiercely Clap Back on Social Media. There is no doubt in the fact that Ghanaian celebrities are very talented, especially when it comes to dealing with critics.

They clap back at the haters so fiercely that they should get awards for it as well. From making the critics learn a lesson that celebrities are not their private property to making the haters understand the fact that they can’t come on social media and say anything to protect their self rights, Ghanaian celebrities know how to deal with the haters pretty well. According to collective report by Ghana News Live, the Ghanaian celebrities who are famous for clapping back at haters amazingly include Yvonne Nelson, Nana Aba Anamoah, Bridget Otoo, Lydia Forson and others. Ghanaian celebrities talk about the underrated aspects of marriage. Afia Pokua: l left my dying father to read news - Ghana Live TV.