Internet History Sourcebooks. Russian Revolution See Main Page for a guide to all contents of all sections. 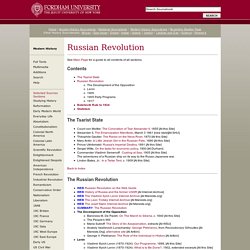 Contents. Bodies of Lenin: The Hidden Science of Communist Sovereignty. Complex political role that Lenin’s body played during the Soviet periodand, to some extent, continues to play today. 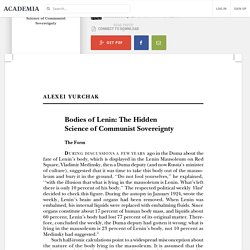 This paper attempts such anunderstanding by analyzing the unique materiality of Lenin’s body, thescientiﬁc procedures that developed as part of this work, and the politicaldebates that accompanied the project from its inception. Despite appearances, the political role of Lenin’s body is anything but obvious. Of course, it is well known that during the Soviet period this body functioned as a central propaganda symbol of the Communist system andthat its public display was supposed to inspire devotion to the Communist project.

However, settling for this interpretation does not explain the emer-gence of the unique scientiﬁc practice focused on maintaining this body’sdynamic parameters and invisible parts. Leon Trotsky - Three Conceptions of the Russian Revolution - 1939. By Leon Trotsky 21 October 2008 Written as an appendix to Trotsky's projected biography of Lenin, and included in his unfinished biography of Stalin, this work contrasts the perspectives of the Russian Revolution advanced by Plekhanov, Lenin and Trotsky. 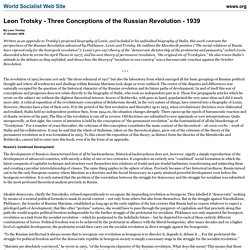 He outlines the Menshevik position (“The social relations of Russia have ripened only for the bourgeois revolution”); Lenin's pre-1917 theory of the "democratic dictatorship of the proletariat and peasantry" (which Lenin discarded when he wrote his April Theses in 1917); and his own theory of permanent revolution, "the original sin of Trotskyism. " He also traces Stalin's attitude to the debates as they unfolded, and shows how the theory of "socialism in one country" was a bureaucratic reaction against the October Revolution. Russia's Combined Development.

Leon Trotsky. Lev Davidovich Bronshtein (he assumed the name Leon Trotsky in 1902) was born in Yanovka, Russia, on 7th November, 1879. 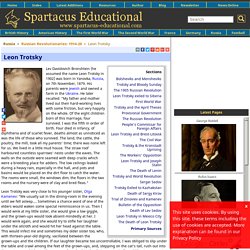 His parents were Jewish and owned a farm in the Ukraine. He later recalled: "My father and mother lived out their hard-working lives with some friction, but very happily on the whole. Of the eight children born of this marriage, four survived. I was the fifth in order of birth. Four died in infancy, of diphtheria and of scarlet fever, deaths almost as unnoticed as was the life of those who survived. Leon Trotsky was very close to his younger sister, Olga Kamenev: "We usually sat in the dining-room in the evening until we fell asleep.... When Trotsky was eight years old his father sent him to Odessa to be educated. In 1899, Trotsky met Alexandra Sokolovskaya. Trotsky later explained "we firmly resolved not to hide in case of wholesale arrests, but to let ourselves be taken. " After escaping Leon Trotsky met Natalia Sedova. Trotsky supported Julius Martov.

Tsar Nicholas II. Nicholas, the eldest son of Alexander III, the Tsar of Russia, and Marie Feodorovna, was born at Krasnoye Selo in May 1868. 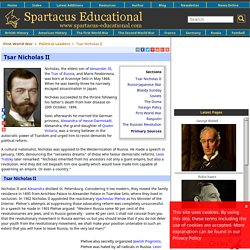 When he was twenty-three he narrowly escaped assassination in Japan. Nicholas succeeded to the throne following his father's death from liver disease on 20th October, 1894. Marxists Internet Archive. Lenin. Vladimir Illich Ulyanov (later known as Lenin) was born in Simbirsk, Russia, on 10th April, 1870. 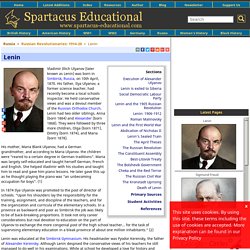 His father, Ilya Ulyanov, a former science teacher, had recently become a local schools inspector. He held conservative views and was a devout member of the Russian Orthodox Church. Lenin had two older siblings, Anna (born 1864) and Alexander (born 1868). They were followed by three more children, Olga (born 1871), Dmitry (born 1874), and Maria (born 1878). His mother, Maria Blank Ulyanov, had a German grandmother, and according to Maria Ulyanov. the children were "reared to a certain degree in German traditions". Tsar Nicholas II. Ten Days That Shook the World, Table of Contents. John Reed. 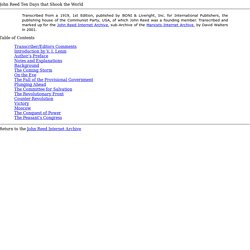 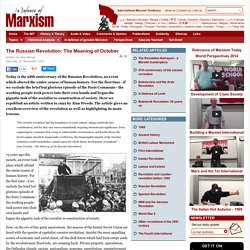 For the first time - if we exclude the brief but glorious episode of the Paris Commune - the working people took power into their own hands and began the gigantic task of the socialist re-construction of society. Here we republish an article written in 1992 by Alan Woods. Trotsky.net. Russian Revolution historiography. The webserver at Alpha History tells us you’re using an adblocking tool, plug-in or browser extension on your computer or network. 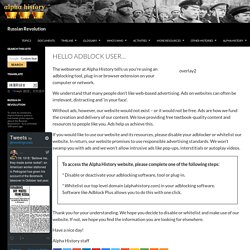 We understand that many people don’t like web-based advertising. Ads on websites can often be irrelevant, distracting and ‘in your face’. Without ads, however, our website would not exist – or it would not be free. Ads are how we fund the creation and delivery of our content. We love providing free textbook-quality content and resources to people like you. If you would like to use our website and its resources, please disable your adblocker or whitelist our website.