37 maps that explain the American Civil War. Lincoln’s Favorite Photographer Illuminates Post-Civil War America. Even if you have little interest in the Civil War (and, truth be told, I fall into that category), a major exhibition at the National Portrait Gallery here in the nation’s capital is a revelation. 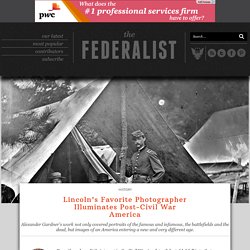 Alexander Gardner (1821-1882) is an unusual figure, an immigrant from the town of Paisley in the Scottish Lowlands who was sometimes a proud Scotsman, sometimes a hairy mountain man, and sometimes a Victorian aesthete. Many of the photographs in the exhibition will be well-known to you from books on American history. From Lincoln and Grant to Lee and Sherman, all the greats are here, sometimes on those small cartes-de-visite which must be rather like baseball cards for historians.

Like this scrivener, however, you probably assumed they were taken by the more well-known Civil War photographer Matthew Brady, for whom Gardner worked before setting out on his own. Did White Northerners Abandon Reconstruction? Update: After you finish reading this post check out Brooks Simpson’s thoughtful response to Gordon-Reed’s essay. 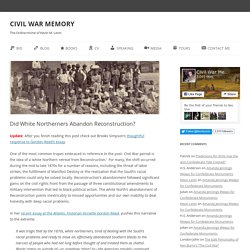 One of the most common tropes embraced in reference to the post- Civil War period is the idea of a ‘white Northern retreat from Reconstruction.’ For many, the shift occurred during the mid to late 1870s for a number of reasons, including the threat of labor strikes, the fulfillment of Manifest Destiny or the realization that the South’s racial problems could only be solved locally. Reconstruction’s abandonment followed significant gains on the civil rights front from the passage of three constitutional amendments to military intervention that led to black political action. The white North’s abandonment of Reconstruction points inextricably to missed opportunities and our own inability to deal honestly with deep racial problems. In her recent essay at the Atlantic, historian Annette Gordon-Reed, pushes this narrative to the extreme: I ask having recently discussed Jannette T. Abraham Lincoln. 10 Facts about the Emancipation Proclamation. So who were the confederates?

If you’ve been watching the news recently and you aren’t up to date with American history, then you may be wondering who the Confederates are. 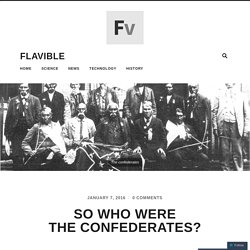 The Confederate States of America or the Confederacy, were a group of 11 Southern States which formed prior/during the American Civil War. Initially there were 7 States ( Alabama, Florida, Georgia, Louisiana, Mississippi, South Carolina and Texas) which unified to oppose the change Abraham Lincoln was bringing. The Confederacy formed to try and stop Abraham Lincoln from changing their way of life. They believed in the political liberty for whites and that slavery was a necessity. An online version of their constitution can be view here. Upon realisation that their way-of-life was being threatened, the president of the Confederacy, Jefferson Davis, ought peaceful separation. Abraham Lincoln's White House - White House Historical Association.

On a hot summer day in August 1864, Abraham Lincoln strolled from his Second-Floor office to the lawn outside the Executive Mansion to greet a regiment of Ohio soldiers en route home after surviving some of the bloodiest fighting of the Civil War. 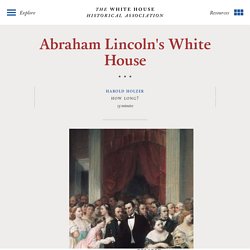 Thanking the men profusely for their bravery and sacrifice, Lincoln implored the veterans to remember that the nation remained "an inestimable jewel" well "worth fighting for," not just for their own generation, but to guarantee "equal privileges" for "our children's children" as well. As he put it: "I happen temporarily to occupy this big White House. I am a living witness that any one of your children may look to come here as my father's child has. "1 By the time he spoke these heartfelt words, it might be fair to say, Lincoln had endured nearly as much suffering and heartache in that "big White House" as the soldiers had on the battlefield. 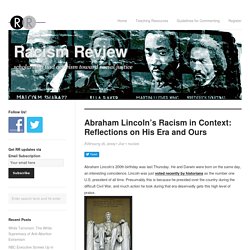 He and Darwin were born on the same day, an interesting coincidence. Lincoln was just voted recently by historians as the number one U.S. president of all time. Presumably this is because he presided over the country during the difficult Civil War, and much action he took during that era deservedly gets this high level of praise. photo credit: Tony the Misfit Yet, virtually none of the current discussions of Lincoln –in this hagiographic mood the country is in–seriously focuses on Lincoln’s extensive racist framing of U.S. society and what that has meant, then as now. Lincoln was a willing servant of that foundational racism. I am not nor ever have been in favor of the social and political equality of the white and black races: that I am not nor ever have been in favor of making voters of the free negroes, or jurors, or qualifying them to hold office or having them to marry with white people….