Docker on Windows Server: how will it work? When Microsoft and Docker first announced that the next version of Windows Server would support the increasingly popular containerisation technology, there wasn't a lot of technical detail about what it will take to make that work, with questions raised about how native Docker could really be. 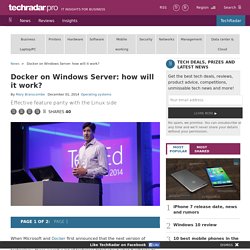 "The Docker engine for Windows Server will have effective feature parity with the Linux side," Docker vice president David Messsina told us. "There will be no difference in using a container, other than the OS inside the container. The APIs and everything else application developers need to rely on will be the same. " But on Linux, the Docker engine (that runs the containers and is separate from the Docker client you use to manage them) uses kernel features like namespaces and C groups. Will Windows Server have that, along with a registry, service hosting and Access Control Lists for each container? Different approach But how does that fit with Windows Server? Each to their own. What is Docker and why is it so darn popular? If you're in data center or cloud IT circles, you've been hearing about containers in general and Docker in particular non-stop for over a year now. 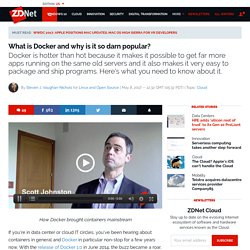 With the release of Docker 1.0 in June, the buzz became a roar. All the noise is happening because companies are adopting Docker at a remarkable rate. At OSCon in July, I ran into numerous businesses that were already moving their server applications from virtual machines (VM) to containers. Indeed, James Turnbull, Docker's VP of services and support, told me at the conference that three of the largest banks that had been using Docker in beta were moving it into production. That's a heck of a confident move for any 1.0 technology, but it's almost unheard of in the safety-first financial world.

At the same time, Docker, an open-source technology, isn't just the darling of Linux powers such as Red Hat and Canonical. What is Docker? When your app is in Docker containers, you don’t have to worry about setting up and maintaining different environments or different tooling for each language. 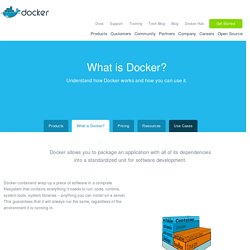 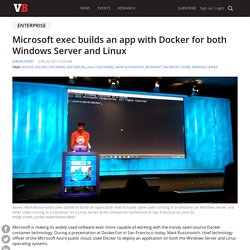 During a presentation at DockerCon in San Francisco today, Mark Russinovich, chief technology officer of the Microsoft Azure public cloud, used Docker to deploy an application on both the Windows Server and Linux operating systems. The front end was written in Asp.net, the middle tier in Node.js, and the back-end on top of MongoDB, Russinovich said. It was “kind of ironic,” he said, but he pushed the Asp.net code to a Linux container, and he pushed the Node code to a container running Windows Server Technical Preview 2. From VentureBeat 2 days, 6 topics, 80+ speakers, 500+ growth marketers. Docker and Microsoft have been working together on several initiatives, including bringing Docker container support to Windows Server.

And there’s more to come. Russinovich even said, “We imagine a world of HoloLens with containers.” » Docker. In 2012, we presented a post showing how to run RStudio in the cloud on an Amazon server. 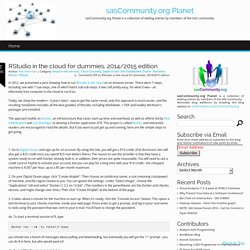 There were 7 steps, including one with 7 sub-steps, one of which had 6 sub-sub-steps. It was still pretty easy, for what it was-- an effectively free computer in the cloud to run R on. Today, we show the modern-- 3 years later! -- way to get the same result, only this approach is much easier, and the resulting installation includes all the best goodies of RStudio, including Markdown -> PDF and Hadley Wickham's packages pre-installed. The approach builds on Docker, an infrastructure that saves start-up time and overhead, as well as efforts led by Dirk Eddelbuettel and Carl Boettiger to develop a Docker application of R. 1. 2. 3. 4a. Docker run --rm -ti rocker/r-base you should see a bunch of messages about pulling and downloading, but eventually you will get the ">" prompt-- you can do R in here, but who would want to? 4b. Boot2docker by boot2docker.