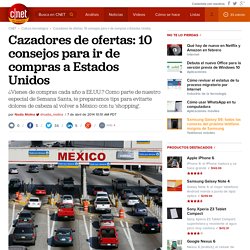 Official Ray-Ban Web Site - Mexico. La marca de robótica líder en el mundo. Weather Cock Wetterhahn. Bicycle Speedometer Anemometer. Built using a digital bicycle speedometer The completed anemometer cup and sensor assembly. Sigma Sport Targa digital bicycle speedometer -- about US$25 at any bike shop. UPDATE 3-29-2006 ---- We are OUT OF STOCK on the surplus brushless DC motor we used to build this project, and since it's surplus we cannot get any more.

You can use a different motor (for example, something salvaged from a dead hard disk drive) because this design depends on the motor only for its bearing -- the internal coils don't factor into the output frequency. You could also use a standard small bearing, available at most good hardware stores. DanF's Easter Egg Anemometer has been up and flying beautifully for 2 years now. Parts List Digital Bicycle Speedometer -- We used a Sigma Sport Targa because of the peak speed, average, and odometer features. Assembly Cut the PVC pipe reducer off with a hacksaw right at the flange, on the big 2 inch side. Optionally, you can skip that entire step. How to Make a Pinwheel: 14 steps (with pictures) Edit Edited by Sophie von Teschen, Flickety, Krystle, Nicole Willson and 26 others Pinwheels delight children as they spin around, their colors whirring together. Crafting a pinwheel is simple and even the smallest children can do most of the steps (though the pin part needs supervision and assistance).

Experiment with different types of paper that you have lying around to see the different effects you can create. Edit Steps. Pinwheel. Affordable art for your home. Japanese interior design firm IDEE has begun a new project called Life In Art. Similar to affordable art retailer 20×200 (which now seems to be defunct), Life In Art presents a refined selection of artists selling affordable prints, albeit at a slightly higher price point compared to 20×200.

But it’s certainly nice to see affordable art gaining some attention in Japan, where there is very little history and culture of displaying art in one’s home. Here are a few artists and their work that caught my eye. Yu Nagaba Illustrator and designer Yu Nagaba is known as the father of the kaeru-sensei character. Mochi mochi The Mochizuki sisters, Sachiko and Junko, together are mochi mochi. Baku Maeda Aside from having one of the best mustaches in Japan, Baku Maeda is also an amazing illustrator and the man behind ribbonesia. Related posts Trending this week. The Future of Possible. Dancing Cat. Shake it like a polaroid picture Cats are notoriously aloof, and would sooner howl at the moon than be made to look foolish. So why do we love them so much? And indeed, why is the internet so packed with cat videos? Well, probably because there is nothing quite as funny as watching a cool, collected cat make an accidental pillock of itself.

Pride goes before a fall and all that... However, when it comes to keeping it all inside, one cat didn’t get the memo. Just connect him to your music using the 3.5mm audio jack This plush puss will happily play music from your mobile phone, with a standard headphone jack. Gerdublan: Wish List. Bola de Plasma. Bola de plasma. Table of Contents for Bert Hickman's TeslaMania Site.

What are Lichtenberg Figures, and how are they Made? When acrylic is irradiated by high-energy electrons, it glows a brilliant blue-white color. Radiation chemistry studies suggest that this is mainly due to luminescence that peaks at a wavelength of about 435 nm. However, acrylic also generates fainter glows from x-ray fluorescence , and Cherenkov radiation . The exact light-producing mechanisms for electron-irradiated PMMA are not fully understood. Newly-irradiated specimens develop an amber-colored layer in the region between the surface(s) that were irradiated by the electron beam and the discharge layer. Called solarization, it appears to be caused by interactions between high speed electrons and the acrylic's molecular structure.

Most of our specimens turn a beautiful lime-green color immediately after irradiation. It has also been discovered that the solarization layer is fluorescent. Finally, you'll notice that all of our sculptures have a discharge-free boundary along the outside edges. AirVision. New airVision NVR (Network Video Recorder) The new airVision NVR is a compact, plug and play appliance that makes deploying a video surveillance system quick and easy. 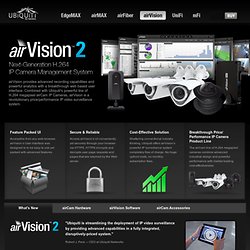 The airVision NVR stores up to 1,200 hours of video at 480p resolution or 400 hours of video at 720p HD resolution on the built-in 500GB hard drive. When combined with airCams and the included airVision video management software, a complete, enterprise-class video surveillance system can be deployed in a matter of minutes. Mobile Support on iOS and Android devices Mobile users can view live video using the airVision web interface on their iOS or Android devices. Improved performance and scalability airVision now uses H.264 video to provide crisper video images and more efficient storage utilization. Faster deployment, more powerful manageability airVision deployment is faster than ever. Our Collection. CollabraCam: Collaborative Social Video Production.