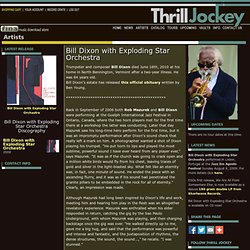 He was 84 years old. Bill Dixon’s estate has released this official obituary written by Ben Young. Back in September of 2006 both Rob Mazurek and Bill Dixon were performing at the Guelph International Jazz Festival in Ontario, Canada, where the two horn players met for the first time there at a workshop the latter was conducting. Later that day Mazurek saw his long-time hero perform for the first time, but it was an impromptu performance after Dixon's sound check that really left a mark on him. A photographer wanted a shot of Dixon playing his trumpet. Although Mazurek had long been inspired by Dixon's life and work, meeting him and hearing him play in the flesh was an altogether revelatory experience. Dixon liked the idea and agreed to proceed, and before long the prestigious Chicago Jazz Festival had signed on to present the concert. 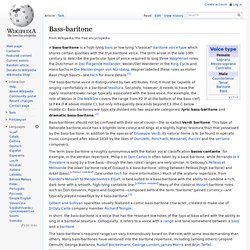 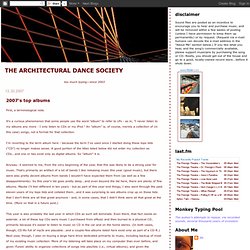 It's a curious phenomenon that some people use the word "album" to refer to LPs - as in, "I never listen to my albums any more - I only listen to CDs or my iPod. " An "album" is, of course, merely a collection of (in this case) songs, not a format for that collection. I'm reverting to the term album here - because the term I've used since I started doing these tops lists ("CD") no longer makes sense. A good portion of the titles listed below did not enter my collection as CDs...and one or two exist only as digital albums. So "album" it is. Anyway: it seemed to me, from the very beginning of the year, that this was likely to be a strong year for music. This year is also probably the last year in which CDs as such will dominate. 10 Great Rock And Roll Lyricists.

What's remarkable about rock's greatest lyricists is how little they have in common. 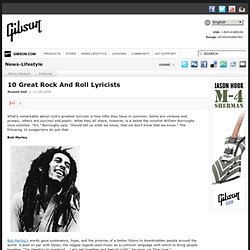 Some are verbose and prosaic; others are succinct and poetic. What they all share, however, is a talent the novelist William Burroughs once extolled. Cantores supremos - La Jornada. Juan Arturo Brennan. 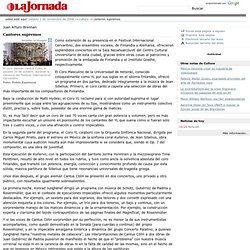 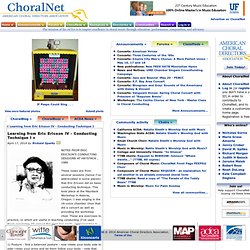 This took place at the Haystack Workshop in Astoria, Oregon. I was singing in the 16-voice chamber choir that did a concert as well as providing the workshop choir. 9 ARMANDO PALOMAS EN FORO ALICIA 27/07/12 EL CHARRO ATRAVANCADO Y CUMBIA SIN SAL. Bach: Jesu, meine Freude, BWV 227 (Mvt. I, II, III) Weep, O Mine Eyes. John Bennet (ca. 1575-1614) "Weep" was first published by John Bennet in his first collection of madrigals in 1599. 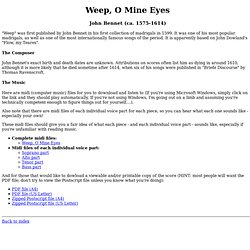 It was one of his most popular madrigals, as well as one of the most internationally famous songs of the period. Weep, O mine eyes - Ensemble D.E.U.M. Voce in Tempore - Quienes Somos. Alastair miles. Terminal beach. December 4th, 2006 - 11.30 p.m.show # 0"ZERO PUBLIQUE" 'But one thing I do know for certain: in later life I shall be a charming, utterly spherical zero.'Robert Walser - Institute Benjamenta Jazkamer - Metal Music Machine - Metal Music MachineMaja Ratkje - The Wolf - Adventura AnatomicaWolf Eyes - The Driller - Human AnimalIncapacitants - Incapacitants - Motommo OtomoK. 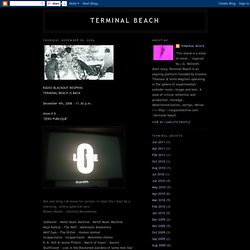 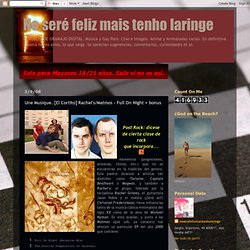 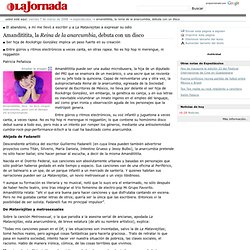 Atlantic Records (Atlantic Recording Corporation) is an American record label best known for its numerous recordings of rhythm and blues, rock and roll, jazz, and hip hop.[1] Over its first 20 years of operation Atlantic earned a reputation as one of the most important American recording labels, specializing in jazz, R&B and soul recordings by African-American artists, a position greatly enhanced by its distribution deal with Stax Records.

Generalidades[editar] Analizaremos los intervalos abarcados entre estas notas. Cat Power. Autechre. Autechre are an English electronic music duo consisting of Rob Brown and Sean Booth, both from Rochdale, Greater Manchester. Formed in 1987, they are one of the most prominent acts signed to Warp Records, a label known for its pioneering electronic music and through which all Autechre albums have been released. While heavily associated with IDM (intelligent dance music), Booth and Brown are ambivalent about relating their sound to established genres.[1] Their music has exhibited a gradual shift in aesthetic throughout their career, from their earlier work with clear roots in techno, house, electro and hip hop, to later albums that are often considered experimental in nature, featuring complex patterns of rhythm and subdued melodies.

Autechre have also recorded under various pseudonyms. One of the duo's earliest recordings was a 12" under the alias Lego Feet, released in 1991 on Skam Records. Nine Inch Nails. History[edit] Formation (1988–1989)[edit] The Nine Inch Nails "NIИ" logo designed by Reznor and Gary Talpas Reznor coined the name "Nine Inch Nails" because it "abbreviated easily", rather than for "any literal meaning".[18] Other rumored explanations have circulated, alleging that Reznor chose to reference Jesus' crucifixion with nine-inch spikes,[19] or Freddy Krueger's nine-inch fingernails.[20] The English letters NIN are also noted for their resemblance to the modern Hebrew characters of the Tetragrammaton.[21] There is also an old English music hall song with the refrain, "I don't not know no one who don't want no nine inch nails.

Benny Moré. Early life[edit] The eldest of eighteen children, Moré was born Bartolomé Moré in Santa Isabel de las Lajas in the former province of Las Villas in central Cuba. His maternal great-great grandfather, Ta Ramón Gundo Paredes, was said to be the son of the king of a tribe in the Congo who was captured by slave traders and sold to a Cuban plantation owner (he was later liberated and died as a freeman at age 94). As a child Moré learned to play the guitar, making his first instrument at age six, according to his mother, out of a board and a ball of string. In 1936, at age seventeen, he left Las Lajas for Havana, where he lived by selling bruised and damaged fruits and vegetables and medicinal herbs. Six months later he returned to Las Lajas and went to cut cane for a season with his brother Teodoro.

Glitter and Doom Tour. The Glitter and Doom Tour was a concert tour by American rock musician Tom Waits. Background[edit] The tour was announced at a performance art press conference on May 5, 2008. Canciones Del Ayer. Wolfgang Amadeus Mozart. Bill Frisell. William Richard "Bill" Frisell (born March 18, 1951) is an American guitarist, composer and arranger. One of the leading guitarists in jazz since the late 1980s, Frisell's eclectic music touches on progressive folk, classical music, country music, noise music and more. He is known for using an array of effects to create unique sounds from his instrument. Biography[edit] Early life and career[edit] Tito Puente. Ernesto Antonio "Tito" Puente, (April 20, 1923 – June 1, 2000),[1] was an American salsa musician and Latin jazz composer. The son of native Puerto Ricans, Ernest and Ercilia Puente, living in New York City's Spanish Harlem community, Puente is often credited as "The Musical Pope," "El Rey de los Timbales" (The King of the timbales) and "The King of Latin Music.

" He is best known for dance-oriented mambo and Latin jazz compositions that helped keep his career going for 50 years. He and his music appear in many films such as The Mambo Kings and Fernando Trueba's Calle 54. He guest-starred on several television shows including Sesame Street, The Cosby Show and, most notably, The Simpsons two-part episode "Who Shot Mr. Burns? ". Bob Marley. Lirica infantil mexicana. Hermanos rincon. HERMANOS RINCON Tabs: Acordes para Guitarra. Lirica infantil mexicana. Hermanos rincon. Lirica infantil mexicana oscar chavez. The Doors. The Doors were an American rock band formed in 1965 in Los Angeles, California, with vocalist Jim Morrison, keyboardist Ray Manzarek, drummer John Densmore and guitarist Robby Krieger. The band took its name from the title of Aldous Huxley's book The Doors of Perception, which itself was a reference to a William Blake quotation, from his famous work The Marriage of Heaven and Hell: "If the doors of perception were cleansed every thing would appear to man as it is, infinite.