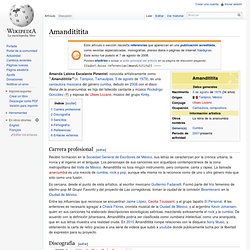 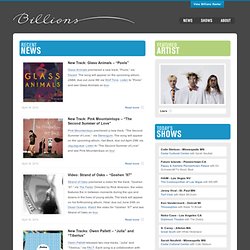 The song will appear on the upcoming album, ZABA, due out June 9th via Wolf Tone. Listen to “Pools” and see Glass Animals on tour. New Track: Pink Mountaintops – “The Second Summer of Love” Pink Mountaintops premiered a new track, “The Second Summer of Love,” via Stereogum. Maude Maggart. Maude Maggart (born February 24, 1975) is an American cabaret singer and recording artist who performs throughout the United States and Europe, but most often in Los Angeles, San Francisco, and New York City.[1][2] Biography[edit] Maggart was born in New York City to Broadway veterans Brandon Maggart and Diane McAfee and is the sister of singer/songwriter Fiona Apple. 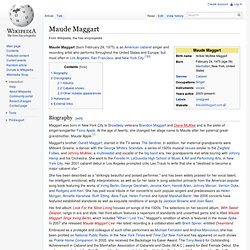 Fado. Fado (Portuguese pronunciation: [ˈfaðu], "destiny, fate") is a music genre which can be traced to the 1820s in Portugal, but probably with much earlier origins. 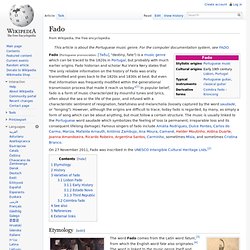 Fado historian and scholar Rui Vieira Nery states that "the only reliable information on the history of Fado was orally transmitted and goes back to the 1820s and 1830s at best. But even that information was frequently modified within the generational transmission process that made it reach us today. "[1] In popular belief, fado is a form of music characterized by mournful tunes and lyrics, often about the sea or the life of the poor, and infused with a characteristic sentiment of resignation, fatefulness and melancholia (loosely captured by the word saudade, or "longing"). 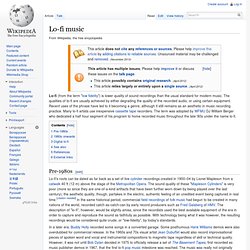 The qualities of lo-fi are usually achieved by either degrading the quality of the recorded audio, or using certain equipment. Recent uses of the phrase have led to it becoming a genre, although it still remains as an aesthetic in music recording practice. Many lo-fi artists use inexpensive cassette tape recorders. The term was adopted by WFMU DJ William Berger who dedicated a half hour segment of his program to home recorded music throughout the late '80s under the name lo-fi.

LCD Soundsystem. On February 5, 2011, a statement was posted on the band's website that announced its disbandment following a farewell concert, which took place on April 2, 2011, at Madison Square Garden.[1] The farewell concert is chronicled in the documentary film Shut Up and Play the Hits. 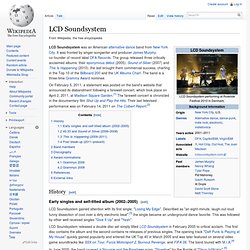 Their last televised performance was on February 14, 2011 on The Colbert Report.[2] History[edit] Early singles and self-titled album (2002–2005)[edit] On December 8, 2005 the group received nominations for two Grammy awards in the Electronica category for their self-titled album and in the Dance category for "Daft Punk Is Playing at My House. 45:33 and Sound of Silver (2006–2008)[edit] LCD Soundsystem's second album, Sound of Silver, was released on March 12, 2007, to near universal critical acclaim.[11] Praise included Mixmag awarding it the title Album of the Month, a 9.2 score from Pitchfork Media[12] and a 5-star review from The Guardian.[13] The album release was preceded by the single "North American Scum". 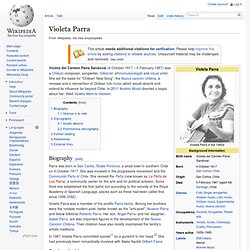 She set the basis for "Chilean' New Song", the Nueva canción chilena, a renewal and a reinvention of Chilean folk music which would absorb and extend its influence far beyond Chile. Ob-La-Di, Ob-La-Da. Writing[edit] Paul McCartney wrote the song around the time that highlife and reggae were beginning to become popular in Britain. 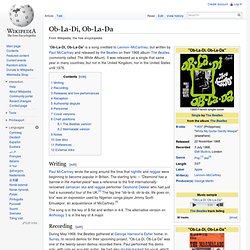 The starting lyric: – "Desmond has a barrow in the market-place" was a reference to the first internationally-renowned Jamaican ska and reggae performer Desmond Dekker who had just had a successful tour of the UK.[3] The tag line "ob-la-di, ob-la-da, life goes on, bra" was an expression used by Nigerian conga player Jimmy Scott-Emuakpor, an acquaintance of McCartney.[4] The song is in the key of B flat and written in 4/4. The alternative version on Anthology 3 is in the key of A major. Emergency Broadcast Network. Emergency Broadcast Network is the name of a multimedia performance group formed in 1991 that took its name from the Emergency Broadcast System. 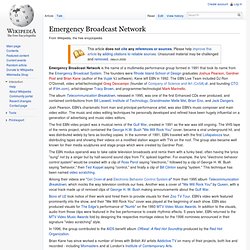 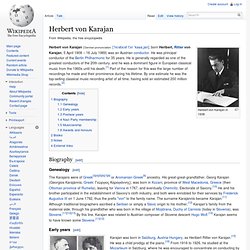 He was principal conductor of the Berlin Philharmonic for 35 years. He is generally regarded as one of the greatest conductors of the 20th century, and he was a dominant figure in European classical music from the 1960s until his death.[1] Part of the reason for this was the large number of recordings he made and their prominence during his lifetime. Juana Molina. Juana Molina (born in Buenos Aires, Argentina) is a singer-songwriter and an actress. Biography[edit] Following the 1976 Argentine coup d'état, her mother fled the country and lived in exile in Paris for five years. She grew up in a musical environment, her famous tango-singing father Horacio Molina taught her guitar from the age of six. Juana Molina started her career in 1988 as a comedic television actress in Argentina on the show La Noticia Rebelde.

Antonio Vivaldi. Antonio Vivaldi in 1725 Many of his compositions were written for the female music ensemble of the Ospedale della Pietà, a home for abandoned children where Vivaldi had been employed from 1703 to 1715 and from 1723 to 1740. Vivaldi also had some success with stagings of his operas in Venice, Mantua and Vienna. After meeting the Emperor Charles VI, Vivaldi moved to Vienna, hoping for preferment. However, the Emperor died soon after Vivaldi's arrival and Vivaldi himself died less than a year later. Though Vivaldi's music was well received during his lifetime, it later declined in popularity until its vigorous revival in the first half of the 20th century. Laibach (band) Laibach was formed on June 1, 1980 in Trbovlje, a mining-industry town, taking the German language version of the name for the city of Ljubljana, used during the period when it was a part of the Habsburg Monarchy and the World War II occupation of Yugoslavia.[1] At the time, the group collaborated with art groups Irwin (painting) and Rdeči Pilot (theatre).[1] Since its formation, the group had been preparing their first multimedia project "Rdeči revirji" ("Red District"), aiming to provoke the current political structures in Trbovlje.[1] The performance was banned before its opening due to its "improper and irresponsible" usage of Malevich's black crosses as symbols on the posters, causing a lot of negative reaction in the media and public.[1] The group's visual style at this earliest stage focused mainly on mining iconography, but in time, they included other symbols as well: Triglav, deer horns and the Malevich's black cross rounded with a gear.[1] LAIBACH Press Photo 1983.

Grateful Dead. The Grateful Dead was an American rock band formed in 1965 in Palo Alto, California.[1][2] The band was known for its unique and eclectic style, which fused elements of rock, folk, bluegrass, blues, reggae, country, improvisational jazz, psychedelia, and space rock,[3][4] and for live performances of long musical improvisation.[5][6] "Their music," writes Lenny Kaye, "touches on ground that most other groups don't even know exists. "[7] These various influences were distilled into a diverse and psychedelic whole that made the Grateful Dead "the pioneering Godfathers of the jam band world".[8] They were ranked 57th in the issue The Greatest Artists of all Time by Rolling Stone magazine.[9] They were inducted into the Rock and Roll Hall of Fame in 1994[10] and their Barton Hall Concert at Cornell University (May 8, 1977) was added to the Library of Congress's National Recording Registry.[11] The Grateful Dead have sold more than 35 million albums worldwide.