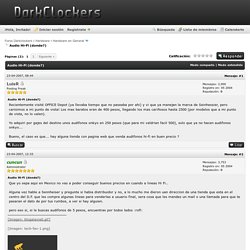 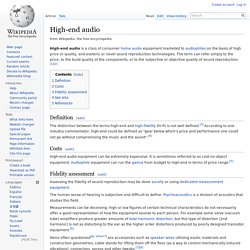 The term can refer simply to the price, to the build quality of the components, or to the subjective or objective quality of sound reproduction.[1][2] Definition[edit] The distinction between the terms high-end and high-fidelity (hi-fi) is not well defined.[3] According to one industry commentator, high-end could be defined as "gear below which’s price and performance one could not go without compromising the music and the sound".[4] Costs[edit] DIY audio - Wikipedia, the free encyclopedia. DIY Audio means "do it yourself" audio. 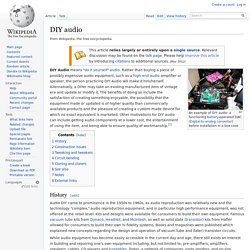 Rather than buying a piece of possibly expensive audio equipment, such as a high-end audio amplifier or speaker, the person practicing DIY Audio will make it him/herself. Alternatively, a DIYer may take an existing manufactured item of vintage era and update or modify it. The benefits of doing so include the satisfaction of creating something enjoyable, the possibility that the equipment made or updated is of higher quality than commercially available products and the pleasure of creating a custom-made device for which no exact equivalent is marketed. Other motivations for DIY audio can include getting audio components at a lower cost, the entertainment of using the item, and being able to ensure quality of workmanship.[1] History[edit] Construction issues[edit] To construct a device takes more than knowledge of circuits, many would urge that the mechanical aspects of cabinets, cases and chassis' are the most time consuming aspects of audio DIY.

Audiophile - Wikipedia, the free encyclopedia. An audiophile is a person enthusiastic about high-fidelity sound reproduction.[1] Audiophile values may be applied at all stages of music reproduction: the initial audio recording, the production process, and the playback, which is usually in a home setting. 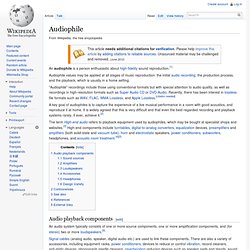 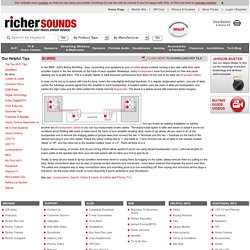 Nowadays, many loudspeakers have four terminals on their rear panel allowing you to bi-wire them. This is a simple 'tweak' to elicit improved performance from them for the cost of an extra set of speaker cables. In case you're not up to speed with how it's done, here's the only-slightly-technical low-down. In a regular, single-wired system, one pair of wires carries the full-range musical signal from the amplifier to each loudspeaker. A bi-wired system uses two pairs of wires per loudspeaker: one carries the high notes and the other carries the middle and low frequencies. You can bi-wire an existing installation by adding another set of loudspeaker cables or you can buy ready-made bi-wire cables . 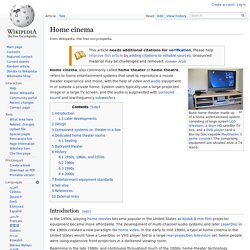 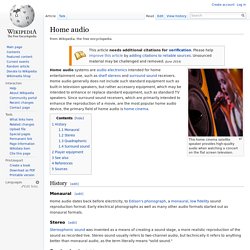 Home audio systems are audio electronics intended for home entertainment use, such as shelf stereos and surround sound receivers. Richer Sounds - The UK's Hi-Fi, Home Cinema & TV Specialists! Amplifiers, usually known as just ‘amps’ are at the very heart of a stereo system. 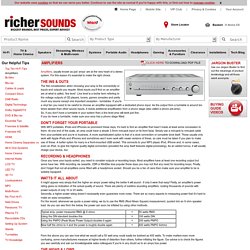 For this reason it’s essential to make the right choice. THE INS & OUTS The first consideration when choosing your amp is the connectivity or inputs and outputs you require. Most inputs you’ll find on an amplifier are at what is called, ‘line level’. Line level is a techie term referring to the voltage outputs of CD players, tuners, games consoles and pretty much any source except one important exception - turntables.

If you're a vinyl fan you need to be careful to choose an amplifier equipped with a dedicated phono input. DON'T FORGET YOUR PORTABLE With MP3 portables, iPods and iPhones so prominent these days, it’s hard to find an amplifier that hasn’t made at least some concession to them. RECORDING & HEADPHONES Once you have your inputs sorted, you need to consider outputs or recording loops. From the above you can see how what we would call a 50 watt amp could easily be dubbed as 400 watts.