Gerald is one of the oldest and the world’s largest commodity trading company focused purely on the merchanting of non-ferrous, ferrous and precious metals, as well as related concentrates and raw materials. 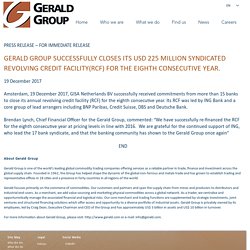 Its RCF was led by ING Bank and a core group of lead arrangers including BNP Paribas, Credit Suisse, DBS and Deutsche Bank. Brendan Lynch, Chief Financial Officer for the Gerald Group, commented: “We have successfully re-financed the RCF for the eighth consecutive year at pricing levels in line with 2016. We are grateful for the continued support of ING, who lead the 17 bank syndicate, and that the banking community has shown to the Gerald Group once again” About Gerald Group Gerald Group is one of the world’s leading global commodity trading companies offering services as a reliable partner in trade, finance and investment across the global supply chain. 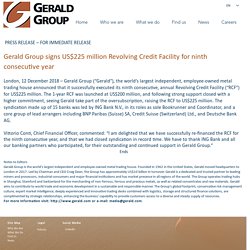 The 1-year RCF was launched at US$200 million, and following strong support closed with a higher commitment, seeing Gerald take part of the oversubscription, raising the RCF to US$225 million. The syndication made up of 15 banks was led by ING Bank N.V., in its roles as sole Bookrunner and Coordinator, and a core group of lead arrangers including BNP Paribas (Suisse) SA, Credit Suisse (Switzerland) Ltd., and Deutsche Bank AG. Vittorio Conti, Chief Financial Officer, commented: “I am delighted that we have successfully re-financed the RCF for the ninth consecutive year, and that we had closed syndication in record time.

Ends Notes to Editors. SL Mining, Right Signal for FDI in Sierra Leone. SL Mining successfully completes first investment phase Donates 100 tons of rice to communities surrounding the Marampa mine London, February 12, 2019: Gerald Group is pleased to announce SL Mining Ltd, a wholly owned subsidiary, has started commissioning at the Marampa mine in Lunsar, following completion of Phase-I of an investment program designed to rehabilitate and reconfigure the operations. 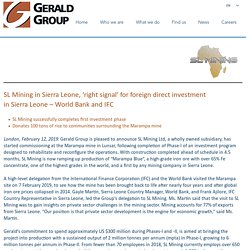 With construction completed ahead of schedule in 4.5 months, SL Mining is now ramping up production of “Marampa Blue”, a high-grade iron ore with over 65% Fe concentrate, one of the highest grades in the world, and a first by any mining company in Sierra Leone. A high-level delegation from the International Finance Corporation (IFC) and the World Bank visited the Marampa site on 7 February 2019, to see how the mine has been brought back to life after nearly four years and after global iron ore prices collapsed in 2014. SL Mining ships first iron ore delivery from Sierra Leone. Lunsar, Sierra Leone and London:SL Mining Limited (“SL Mining”, “the Company”), a wholly owned subsidiary of Gerald Group, is very pleased to announce that the first shipment of iron ore concentrate, branded ‘Marampa Blue’ set sail on MV Cooperfrom Freetown Port (Queen Elizabeth II), located in Sierra Leone. 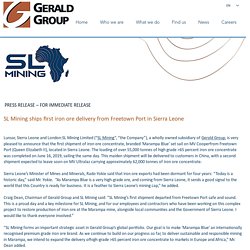 The loading of over 55,000 tonnes of high grade >65 percent iron ore concentrate was completed on June 16, 2019, sailing the same day. This maiden shipment will be delivered to customers in China, with a second shipment expected to leave soon on MV Ultralaz carrying approximately 62,000 tonnes of iron ore concentrate. Sierra Leone’s Minister of Mines and Minerals, Rado Yokie said that iron ore exports had been dormant for four years: “Today is a historic day,” said Mr. Yokie. “As Marampa Blue is a very high-grade ore, and coming from Sierra Leone, it sends a good signal to the world that this Country is ready for business. 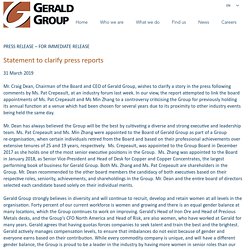 Craig Dean, Chairman of the Board and CEO of Gerald Group, wishes to clarify a story in the press following comments by Ms. Pat Crepeault, at an industry forum last week. In our view, the report attempted to link the board appointments of Ms. Mr. Gerald Group strongly believes in diversity and will continue to recruit, develop and retain women at all levels in the organisation. Ms. Runner-up: Excellence in battery metals – Alphamin Resources. Alphamin Resources should have a bumper 2020 year on the back of successful commissioning at its Bisie tin mine in the Democratic Republic of Congo (DRC) in 2019. 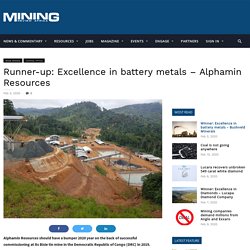 Alphamin started construction of its Bisie mine in 2017 which once at steady-state production will deliver an average of 9 642 tpa of tin in a +60% concentrate. This article first appeared in Mining Elites in Africa 2020 Read the full digimag here or subscribe to receive a print copy here Over its 12-year lifespan, Bisie is expected to produce 152 300 t of high grade tin. The project has a payback period of less than two years and Alphamin estimates it will be in the lowest cost quartile of all tin producers. Initially, Alphamin plans to mine the Mpama North ore body and then used revenue generated to start operations at Mpama South, extend Mpama North at depth, and will eventually look to explore further for additional tin resources within its licence area. 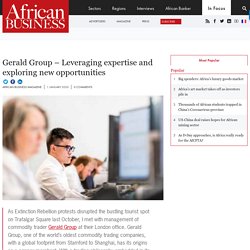 Gerald Group, one of the world’s oldest commodity trading companies, with a global footprint from Stamford to Shanghai, has its origins as a copper merchant. With a trading philosophy embedded in its most valued employees from the days of founder Gerald Lennard, nearly six decades on, Gerald has evolved to become the largest independent, employee-owned metals merchant in the world. The Group is actively exploring new opportunities leveraging on decades of experience, and investing in new metal merchant transactions, from prepayments to new min- ing projects. Gerald plays a vital role in ensuring that global industries have a steady supply of responsibly sourced raw materials. Ms. David Whittaker Ms. David Whittaker. Gerald Metals - Metal Trader United Kingdom.