Adidas Profile, History, Founder, Founded, Ceo. Being the 61th ranked brand amongst the World’s Most Valuable Brands and having more than 92 innovative companies, Adidas has positioned itself as the leader in the world market. 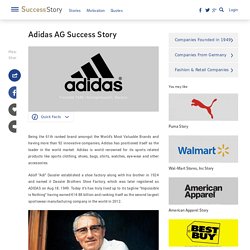 Adidas is world renowned for its sports related products like sports clothing, shoes, bags, shirts, watches, eye-wear and other accessories. Adolf "Adi" Dassler established a shoe factory along with his brother in 1924 and named it Dassler Brothers Shoe Factory, which was later registered as ADIDAS on Aug 18, 1949. Today it’s has truly lived up to its tagline “Impossible is Nothing” having earned €14.88 billion and ranking itself as the second largest sportswear manufacturing company in the world in 2012. After the splitting with his brother, Adolf Adi Dassler took forward the company on his own sole strategies which eventually led to a fierce battle with PUMA. A fierce rivalry ensued between Puma, the company established by Adolf's brother. Adidas Group - Boost success - One year into the future of running. One year ago, the world was watching as adidas revealed a new global innovation: Boost. 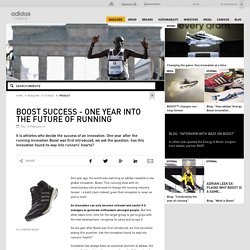 This running shoe with its revolutionary sole promised to change the running industry forever – a bold claim indeed, given that innovation is never an end in itself. An innovation can only become relevant and useful if it manages to generate enthusiasm amongst people. But this often takes time; time for the target group to get to grips with the new development, recognise its value and accept it. So one year after Boost was first introduced, we find ourselves asking this question: has the innovation found its way into runners’ hearts? Innovation has always been an essential element at adidas, the engine that has driven the company through all these decades. Take, for example, the adidas_1. The creators of Boost really believed in the quality of their innovation, even more so thank back in the adidas_1 days. But it was still going to take a long time to reach that point. Athletes who won races in Boost.

Adidas' Top 10 "Friday Facts" Posted by: Zara | 3 years ago | In brand, Interesting, Online fun The Adidas brand is one of the most successful and biggest sports clothing brands in the world!! 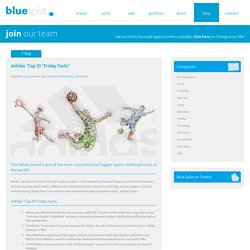 Adidas’ success is all down to its high quality products, smart marketing ideas and hugely successful endorsement and sponsorship deals! Simply, Adidas is one of the best at what it does! So as its Friday, we put together some fun and interesting “Friday Facts” on one of our own personal favourite sportswear brands…Adidas! Enjoy! Adidas’ Top 10 Friday Facts. Adidas Group - History. The early years Every great story has a beginning. 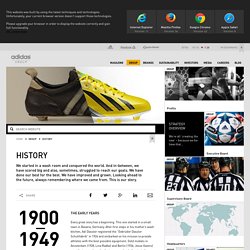 This one started in a small town in Bavaria, Germany. After first steps in his mother’s wash kitchen, Adi Dassler registered the “Gebrüder Dassler Schuhfabrik” in 1924 and embarked on his mission to provide athletes with the best possible equipment. Gold medals in Amsterdam (1928, Lina Radke) and Berlin (1936, Jesse Owens) were first rewards and milestones – and only the start of our story.

First Gold Medals The young Adi Dassler in his shoe factory Founding father On August 18, 1949, Adi Dassler started over again at the age of 49, registered the “Adi Dassler adidas Sportschuhfabrik” and set to work with 47 employees in the small town of Herzogenaurach. A miracle in Bern Who would have thought that screw-in-studs on lightweight football boots would help write history? 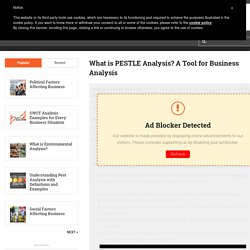 PESTLE analysis, which is sometimes referred as PEST analysis, is a concept in marketing principles. Moreover, this concept is used as a tool by companies to track the environment they’re operating in or are planning to launch a new project/product/service etc. PESTLE is a mnemonic which in its expanded form denotes P for Political, E for Economic, S for Social, T for Technological, L for Legal and E for Environmental. It gives a bird’s eye view of the whole environment from many different angles that one wants to check and keep a track of while contemplating on a certain idea/plan.

The framework has undergone certain alterations, as gurus of Marketing have added certain things like an E for Ethics to instill the element of demographics while utilizing the framework while researching the market. There are certain questions that one needs to ask while conducting this analysis, which give them an idea of what things to keep in mind.