Police corruption due to ‘blue code of silence’ John Hagedorn (left), professor of criminology, law and justice, and Dick Simpson, professor of political science, discuss their report on corruption among Chicago police officers at a press conference at City Hall. 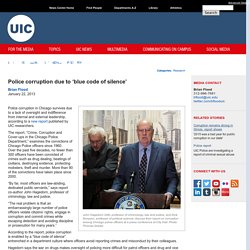 Photo: Thomas Gradel Police corruption in Chicago survives due to a lack of oversight and indifference from internal and external leadership, according to a new report published by UIC researchers. The report, “Crime, Corruption and Cover-ups in the Chicago Police Department,” examines the convictions of Chicago Police officers since 1960. Over the past five decades, no fewer than 300 officers have been convicted of crimes such as drug dealing, beatings of civilians, destroying evidence, protecting mobsters, theft and murder. The jaw-dropping police/prosecutor scandal in Orange County, Calif. Last October, I noted some really disturbing revelations coming out of Orange County, Calif., in which prosecutors were allowing accused felons to go free rather than reveal potentially exculpatory information about how they use jailhouse informants. 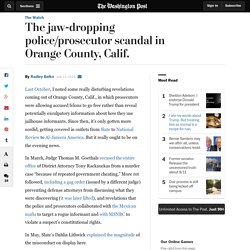 Since then, it’s only gotten more sordid, getting covered in outlets from Slate to National Review to Al-Jazeera America. But it really ought to be on the evening news. In March, Judge Thomas M. Goethals recused the entire office of District Attorney Tony Rackauckas from a murder case “because of repeated government cheating.” More rot followed, including a gag order (issued by a different judge) preventing defense attorneys from discussing what they were discovering (it was later lifted), and revelations that the police and prosecutors collaborated with the Mexican mafia to target a rogue informant and with MSNBC to violate a suspect’s constitutional rights.

So far, the scandal has affected at least three dozen cases. The Blue Wall of Silence Among Police Enables Cop Brutality. (Photo: Bill Dickinson)BILL BERKOWITZ FOR BUZZFLASH AT TRUTHOUT “In the late 1960s,” the Encyclopedia of Law Enforcement points out, “the blue wall [of silence] came crashing down when a New York City police officer named Frank Serpico blew the whistle on fellow officers who were engaging in illegal activities, including taking bribes from drug dealers and members of organized crime.” 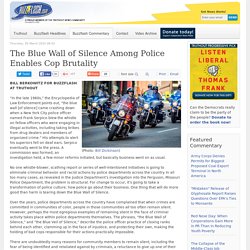 His attempts to alert his superiors fell on deaf ears. Serpico eventually went to the press. A commission was formed, an investigation held, a few minor reforms initiated, but basically business went on as usual. No one whistle-blower, scathing report or series of well-intentioned initiatives is going to eliminate criminal behavior and racist actions by police departments across the country. Seven Reasons Police Brutality Is Systemic, Not Anecdotal. Darrin Manning’s unprovoked “stop and frisk” encounter with the Philadelphia police left him hospitalized with a ruptured testicle. 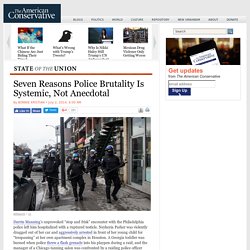 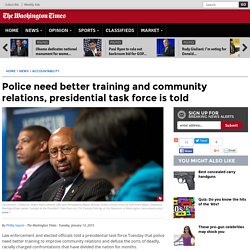 Such training is becoming more difficult in an era of budget constraint, they told the 12-member President’s Task Force on 21st Century Policing at its first public meeting. Though not a perfect solution, analysts said, more comprehensive training for police officers is, in the words of Baltimore Mayor Stephanie Rawlings-Blake, “a good start.” Police “need to learn more than logistics of policing but also the broader significance of their role in society,” she said during one forum, held at the Newseum in Washington.

Ms. "Enough is enough": Tens of thousands march to protest police violence. Last Updated Dec 14, 2014 12:09 AM EST WASHINGTON -- Thousands of protesters marched across the country Saturday to call attention to the deaths of unarmed black men at the hands of police and urge lawmakers to take action. 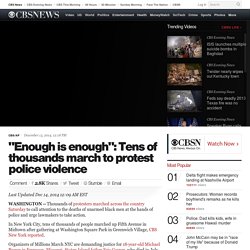 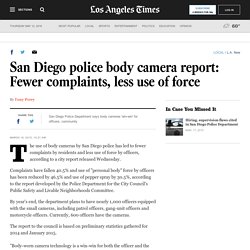 Complaints have fallen 40.5% and use of "personal body" force by officers has been reduced by 46.5% and use of pepper spray by 30.5%, according to the report developed by the Police Department for the City Council's Public Safety and Livable Neighborhoods Committee. By year's end, the department plans to have nearly 1,000 officers equipped with the small cameras, including patrol officers, gang-unit officers and motorcycle officers. Currently, 600 officers have the cameras. The report to the council is based on preliminary statistics gathered for 2014 and January 2015. Police body cameras may solve one problem but create others.

WASHINGTON (AP) — The use of police body cameras is spreading to keep officers honest about using force against citizens. 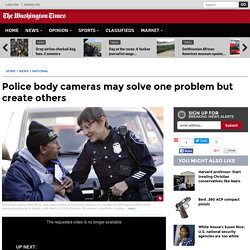 But how and when the public gets to see the footage is up for debate. Videos of police shootings have become critical to determining what happened in situations that turn deadly. In some cases, strapping cigarette pack-size cameras to officers’ uniforms has been framed as a way to curb police brutality and stem deteriorating trust in law enforcement. It’s not that simple. Police and Prosecutorial Misconduct. Click the "ad" for details. 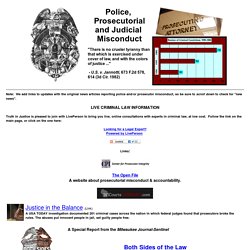 UPDATE - 4/25/08: Now we know why the state violated a court order to test -- and use up -- key evidence. The state, and specifically, Assistant DA John Norsetter, has known for 13 years that Ralph Armstrong's brother confessed to the crime of which Ralph was convicted. Norsetter, who retired from the office last year, allegedly not only failed to investigate or notify Armstrong’s defense attorneys of this confession, he subsequently ordered a test that destroyed evidence that could have established Steve Armstrong’s guilt. Worse Than Bad Faith North Carolina: Durham County DA Mike Nifong has made himself the national poster boy for prosecutorial misconduct by his handling of rape allegations against Duke University lacrosse players. The Blue Wall of Silence Among Police Enables Cop Brutality.

Why Police Officers Lie Under Oath. THOUSANDS of people plead guilty to crimes every year in the United States because they know that the odds of a jury’s believing their word over a police officer’s are slim to none. 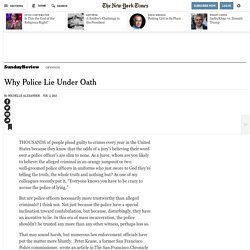 As a juror, whom are you likely to believe: the alleged criminal in an orange jumpsuit or two well-groomed police officers in uniforms who just swore to God they’re telling the truth, the whole truth and nothing but? Who Polices Prosecutors Who Abuse Their Authority? Usually Nobody. Tony Bennett near Jamaica Bay, N.Y. After serving 13 years in prison for murder, Bennett was released when a state appeals court found that the prosecutor who had handled his case had violated a basic rule of law by withholding critical evidence from Bennett's attorney. In an interview, Bennett confessed to the crime.

Police Are Granted Abusive Powers By a System That Condones Their Actions. Oakland police officers holding riot squad formation, July, 2010. (Photo: Thomas Hawk / Flickr) "Like the possibility of arrest, the threat of violence is implicit in every police encounter," writes Kristian Williams in Our Enemies in Blue. "Violence, as well as the law, is what they represent. " This acclaimed and influential book, now in a revised and updated new edition, draws on history and detailed research to make a provocative but convincing argument about the nature of law enforcement in the United States. Police Brutality Statistics. Free Searches Criminal RecordsDUI OffensesMuch More ========= Multi-Author AdSense ========= Skipped due to there being 3 AdSense ads on this page already ======================================== The following statistics were compiled by the National Police Misconduct Statistics and Reporting Project on Police Brutality cases that happened between April 2009 – June 2010. if you talk to a police officer, they will try their hardest to convince you that bad cops are few and far between and there are only a few bad apples.

The following information presented in the graphic below really puts a dent in that theory. Related. One Troubling Statistic Shows Just How Racist America's Police Brutality Problem Is. The statistics: White officers kill black suspects twice a week in the United States, or an average of 96 times a year. Those are the findings of a USA Today analysis of seven years of FBI data, which claims around a quarter of the 400 annual deaths reported to federal authorities by local police departments were white-on-black shootings. What's more, the analysis indicates that 18% of the black suspects were under the age of 21 when killed by the police, as opposed to just 8.7% of white suspects.

Throughout much if not all of America, black people are disproportionately more likely to be killed by the police. The background: Statistics like these may help explain why Pew polls have demonstrated continued low confidence among non-whites in the police and justice systems. UN Committee condemns U.S. for racial disparity, police brutality. Demonstrators march against police brutality in San Francisco in 2013. Photo by Flickr user Steve Rhodes The United Nations’ Committee on the Elimination of Racial Discrimination (CERD) has published a scathing report analyzing the current state of racial justice in the United States.

Citing the August 9th shooting of 18 year-old Michael Brown, an unarmed black teenager in Ferguson, Missouri and the rise of stand-your-ground laws, the committee expressed deep concerns about the ways in which the American justice system handles racially-charged events. African Americans across the country, the CERD explained in a press conference, bear a disproportionate amount of the burden associated with economic and social disparity. Despite denials from its mayor, Ferguson, the St. 8 Horrible Truths About Police Brutality and Racism in America Laid Bare by Ferguson. The hard truths about American racism exposed by Ferguson aren’t going away. A Structural and Permanent Solution to Police Brutality. Police brutality solutions are training, community relations, presidential task force told. Race and Justice: Much More Than You Wanted To Know. Political Lies About Police Brutality.

15 Things Your City Can Do Right Now to End Police Brutality. Martin Luther King Jr. said it best in 1966: "[The] law cannot make a man love me, but it can restrain him from lynching me, and I think that's pretty important also. " Two years later, he was shot and killed in Memphis.