The 'Cop' mentality: when police conspire against the public good. I have a Concealed Handgun License for this very reason, even though I never pack a gun. 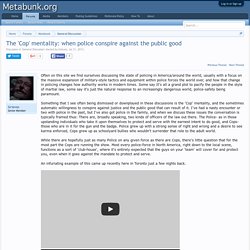 To get one of those in Texas you must have no felony record, go through a 12-hour course, demonstrate marksmanship, and pass a written test. As soon as a cop sees my CHL he relaxes because he knows I’m a responsible citizen. I like to drive fast, and that thing has gotten me out of numerous tickets. 2. Yes, most cops are on power trips: Look, I’m not going to sugarcoat this: most people who become cops do it because at some level they like having power over other people. This doesn’t necessarily make them bad people; for every loser who’s compensating for getting beat up in high school, there are 10 cops who are doing it for the right reasons (they care about their communities and they want to protect good people from criminals).

Click to expand... Prosecutors and police: The inherent conflict in our courts. Our system of government works best when there are checks and balances led by independent entities that are empowered to conduct fair and rigorous oversight. 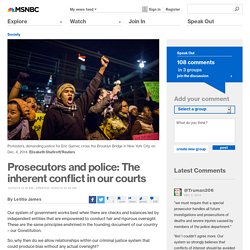 These are the same principles enshrined in the founding document of our country – our Constitution. So, why then do we allow relationships within our criminal justice system that could produce bias without any actual oversight? I am speaking, of course, about the grand jury decision in the case of Eric Garner and the relationship between the Staten Island district attorney and the police officer he purported to prosecute. Despite clear, video evidence that showed what appears to be Garner’s chokehold death at the hands of police, the district attorney was unable to obtain an indictment – even for a lesser offense of assault. RELATED: City officials clash over Garner decision District attorneys are often some of the finest public servants. PHOTOS: Protesters rally nationwide over Garner grand jury decision. Why It’s Impossible to Indict a Cop. How to police the police is a question as old as civilization, now given special urgency by a St. 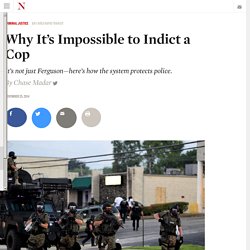 Louis County grand jury’s return of a “no bill” of indictment for Ferguson, Missouri, police officer Darren Wilson in his fatal shooting of an unarmed teenager, Michael Brown. The result is shocking to many, depressingly predictable to more than a few. Can the cops be controlled? It’s never been easy: according to one old sociological chestnut, the monopoly on the legitimate use of violence is what defines modern government, and this monopoly is jealously protected against the second-guessing of puny civilians. All over the country, the issue of restraining police power is framed around the retribution against individual cops, from Staten Island to Milwaukee to Los Angeles. Police shootings in America First, the big picture. Perhaps the most disturbing thing about these police killings, many of them of unarmed victims, is that our courts find them perfectly legal. 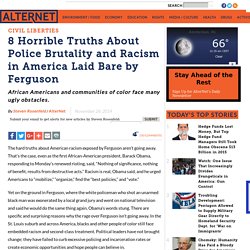 That’s the case, even as the first African-American president, Barack Obama, responding to Monday’s renewed rioting, said, “Nothing of significance, nothing of benefit, results from destructive acts.” Racism is real, Obama said, and he urged Americans to “mobilize,” “organize,” find the “best policies,” and “vote.” Yet on the ground in Ferguson, where the white policeman who shot an unarmed black man was exonerated by a local grand jury and went on national television and said he would do the same thing again, Obama’s words stung. There are specific and surprising reasons why the rage over Ferguson isn’t going away. In the St.

Here are eight terrible facts and trends about abusive policing and institutional racism laid bare by the Ferguson uprising. 1. 2. 3. As an ACLU report found, the rampant over-militarization is a national problem, not a few “bad apple” local departments. 4. 5. 6. 7. 8.