The Aging Population is Growing, and So Are its Retail Needs. We’re all getting older, but we’re also living longer. 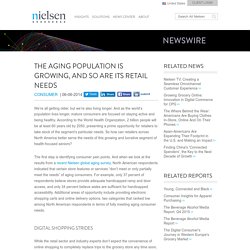 And as the world’s population lives longer, mature consumers are focused on staying active and being healthy. According to the World Health Organization, 2 billion people will be at least 60 years old by 2050, presenting a prime opportunity for retailers to take stock of the segment’s particular needs. So how can retailers across North America better serve the needs of this growing and lucrative segment of health-focused seniors? The first step is identifying consumer pain points. And when we look at the results from a recent Nielsen global aging survey, North American respondents indicated that certain store features or services “don’t meet or only partially meet the needs” of aging consumers. Digital Shopping Strides One in five North American respondents said they’re currently ordering online for home delivery of traditional grocery trips, and two-thirds expressed a willingness to use these services. 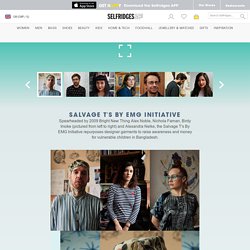 Shop Now. Green is the new black? Six sustainable ideas for London Fashion Week. Fast Fashion: Can It Be Sustainable? In the last 50 years, the way we produce and consume fashion has dramatically changed. 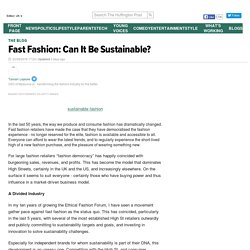 Fast fashion retailers have made the case that they have democratised the fashion experience - no longer reserved for the elite, fashion is available and accessible to all. Everyone can afford to wear the latest trends, and to regularly experience the short-lived high of a new fashion purchase, and the pleasure of wearing something new. For large fashion retailers “fashion democracy” has happily coincided with burgeoning sales, revenues, and profits. Sustainability And Fashion Education: The Next Generation. During the last decade I spent six years working for mainstream fashion labels, my frustration growing as my awareness of the industry’s lack of ethics increased. 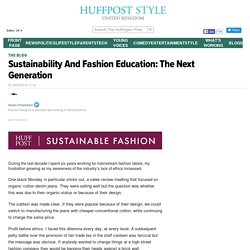 One black Monday in particular sticks out, a sales review meeting that focused on organic cotton denim jeans. They were selling well but the question was whether this was due to their organic status or because of their design. Climate food crunch demands sustainable food system. Sustainable consumption and production practices on a global scale could meet the environmental aspects of the UN sustainable development goals that the world has set itself, and keep delivering food to the tables of 9 billion. 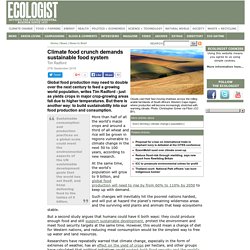 More than half of all the world's maize crops and around a third of all wheat and rice will be grown in regions vulnerable to climate change in the next 50 to 100 years, according to new research. At the same time, the world's population will grow to 9 billion, and global food production will need to rise by from 60% to 110% by 2050 to keep up with demand. Such changes will inevitably hit the poorest nations hardest, and will put at hazard the planet's remaining wilderness areas and the surviving wild plants and animals that keep ecosystems stable. But a second study argues that humans could have it both ways: they could produce enough food and still support sustainable development, protect the environment and meet food security targets at the same time.

Emma Watson creates her own chic sustainable fashion wardrobe- and you can shop it too  Gender pay gap won't close until 2069, says Deloitte. It will be more than half a century before the gender pay gap closes in the UK, according to a report that highlights the gulf between men and women’s earnings, even at the outset of their careers.

Progress on closing the pay gap has been so slow that on current trends it will not be eradicated until 2069 – or 99 years after the 1970 Equal Pay Act – according to an analysis by consultants Deloitte. Laying bare the challenge for government as it seeks to tackle inequality, the report finds that at the very start of their working lives, women graduates are earning less than their male peers in many jobs. That gap holds true even in sectors where women workers dominate, such as healthcare and teaching. In all but one of 10 popular occupations for graduates, men start out on higher average salaries than women. Number of children in workless households hits record low.

The number of children living in UK households where no adult is working has fallen to its lowest level since recent records began two decades ago, according to official data. 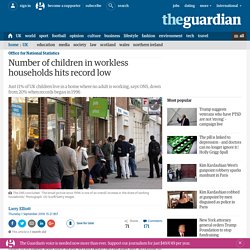 Figures from the Office for National Statistics (ONS) showed that 11% of British children lived in a workless household in 2016 – a fall of 0.8 percentage points on the previous year. World Bank renews drive against inequality. The World Bank has called for a fresh drive to tackle inequality after warning that the gap between rich and poor risks thwarting its ambition of eliminating extreme poverty by 2030. 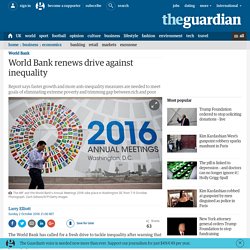 Ahead of its annual meeting with the IMF in Washington DC this week, the Bank said that the number of people living on less than $1.90 a day – the accepted benchmark for extreme poverty – had continued to fall despite the sluggishness of the global economy in the years after the financial crisis. But it said faster growth and a range of anti-inequality measures would be needed to meet the twin goals set by its president, Jim Yong Kim: reducing poverty from just under 11% of the global population to 3% and boosting the incomes of the bottom 40% of the population in each country.

“It’s remarkable that countries have continued to reduce poverty and boost shared prosperity at a time when the global economy is underperforming – but still far too many people live with far too little,” said Kim. That means: Sustainable material. What sustainable material mean? 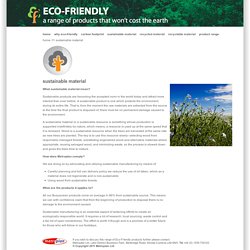 Sustainable products are becoming the accepted norm in the world today and attract more interest than ever before. A sustainable product is one which protects the environment during its entire life. Resources - Sustainable Materials. Pound jumps after UK retail sales defy Brexit fears – as it happened. Young women – do you feel the pressure to be perfect?

It’s easy to look at someone’s life and think it’s more perfect than yours. 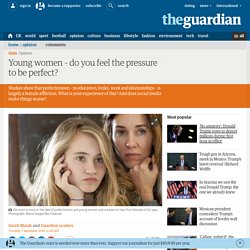 And, with the advent of social media, it’s never been simpler to make comparisons. But what impact is this having? The tendency to feel inadequate largely affects females, according to some studies. Young people living in a 'suspended adulthood', finds research. Despair, worries about the future and financial pressures are taking a toll on millions of young Britons, according to a poll which found young women in particular were suffering.

Low pay and lack of work in today’s Britain are resulting in “suspended adulthood”, with many living or moving back in with their parents and putting off having children, according to the poll of thousands of 18 to 30-year-olds. Large numbers describe themselves as worn down (42%), lacking self-confidence (47%) and feeling worried about the future (51%). The Young Women’s Trust, the charity that commissioned the polling by Populus Data Solutions, warned that Britain was facing a “generation of young people in crisis” as it called on the government to take steps including creating a minister with responsibility for overall youth policy. Young women are being particularly affected. The percentage of women reporting that they lacked self-confidence was 54%, compared with 39% of young men.

It’s never been easy being a teenager. But is this now a generation in crisis? Mollycoddled and cosseted or stressed and over-pressured. Energised and engaged or bored and turned off. Young people have so many labels and stereotypes slapped on them it’s a wonder these are not visible on their endless selfies. What is undeniably true is that the evidence suggests that rates of depression, self-harm and anxiety among young people are at unprecedented levels. Youth unemployment is more than 13%, the cost of higher education is rapidly rising, a drought of affordable housing coupled with low pay is keeping many young people sealed under the parental roof and trapped in what one report called “suspended adulthood”. Sustainable design: Back to nature - Retail Focus - Retail Blog For Interior Design and Visual Merchandising.

Details Created on Wednesday, 18 February 2015 11:36 18 Feb. Meet the future stars of sustainable fashion. A new breed of fashion designer is putting ethics at the heart of everything they do. No longer is sustainability and social responsibility a token extra or cynical marketing ploy. The smartest brands are the ones taking full responsibility for every step of the process, from the supplier to the maker – and in some cases the aftercare of the product, too.

These are designers interested in quality, never quantity – a generation making clothes we will cherish, that will make us consume less and make the best possible choice when we do. Nike FuelStation interactive store in London’s Shoreditch. Nike is hoping to change the way we shop. The shopping experience of the next decade is to be all about involving you, the customer, in a way that not even Apple does at the moment. Nike Digital Retail Experience - Demodern Digitalagentur. 5 Benefits of Interactive Retail Displays on Customer Experience. Shop the iStreet: how smart new tech is changing the future of the fashion store. Standing in front of a mirror in a changing room is up there with my least favourite things to do. Trendy Brands Market Gender-Neutral Styles. In roughly the time since Bruce became Caitlyn Jenner and put new ideas about male and female into the headlines, gender-neutral fashion has moved from high-fashion runways to everyday denim.

7 Gender Non Conformist & Gender Neutral Clothing Brands To Support Right Now. One thing that I find increasingly frustrating as a designer is that I am often forced to tick a menswear or womenswear box when advertising my products. Lamentably, there seem to be few options to identify as a designer of gender neutral clothing and accessories, but that doesn't mean those designers don't exist. I've never personally designed anything with the intention of catering only to those who self-identify within a set gender binary. But as a handmade designer who still sells on Etsy, I've noticed there's no option for posting a skirt or dress or even a body chain that isn't gendered.

Checking that box makes me feel as though I am imposing limits on my designs and those who want to wear them, which I definitely don't support.