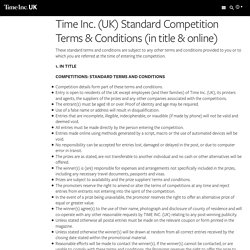 Competition details form part of these terms and conditions.Entry is open to residents of the UK except employees (and their families) of Time Inc. (UK), its printers and agents, the suppliers of the prizes and any other companies associated with the competitions.The entrant(s) must be aged 18 or over. Fashion revival for AllSaints. The company, which is famous for ranks of sewing machines in its shop windows, has seen annual earnings before interest, tax, depreciation and amortisation hit £7.5m, from a £9.1m loss 12 months earlier. 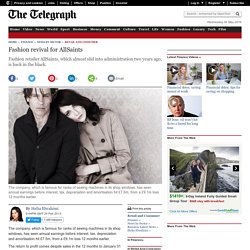 "Our aim is to convert more customers at full price, which will help increase growth. And we have seen that affect the bottom line immediately. " AllSaints has been owned by Lion Capital since 2011. The private equity firm, which used to own fashion brands including Jimmy Choo, rescued the company when it was close to collapse and has now turned its attention to an international expansion programme. It has 100 stores in nine countries across the UK, Netherlands and the US. Who's Suing Whom: Clothing company takes action against All Saints. ALL SAINTS, a company which makes designer clothes, is taking legal action against the popular girl band of the same name. 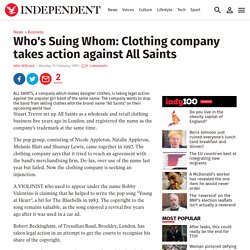 The company wants to stop the band from selling clothes with the brand name "All Saints" on their upcoming world tour. Stuart Trevor set up All Saints as a wholesale and retail clothing business five years ago in London, and registered the name as the company's trademark at the same time. The pop group, consisting of Nicole Appleton, Natalie Appleton, Melanie Blatt and Shaznay Lewis, came together in 1997. Designer Clothing, Shoes & Accessories. Religion. Online Shop. AllSaints RTW Fall 2016 – WWD. Because this British contemporary brand is targeting the Japanese market as part of its international expansion efforts, it opted to showcase its fall collection in Tokyo. 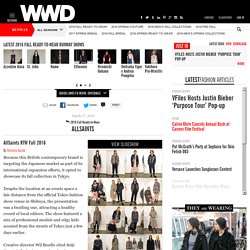 Despite the location at an events space a fair distance from the official Tokyo fashion show venue in Shibuya, the presentation was a bustling one, attracting a healthy crowd of local editors. The show featured a mix of professional models and edgy kids scouted from the streets of Tokyo just a few days earlier. Creative director Wil Beedle cited Seiji Kurata’s flash photography of early Eighties Japan and the rise of the post-punk movement for the fall collection, dubbed “Remote Control.”

AllSaints launch winter sale early - get up to 50% off clothing, shoes, leather and accessories. If you've been eyeing up some current season items from fashion-forward high street brand AllSaints, you'll probably be pleased to hear about their latest offer. 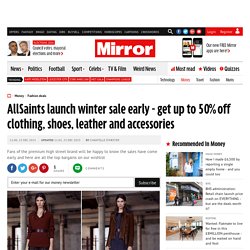 AllSaints have launched their sale early, with 50% off selected end of season items - leather jackets, partywear, shoes and accessories. The sale, which features both mens and womenswear , features tops from £12, dresses from £24 and for the guys shirts start from £34. Here are a few items that we'll be adding to our wishlist. Our top sale picks Women's 'Brooklyn' leather biker jacket : £166 (was £278) Women's cropped reversible knit : £34 (was £68) Men's light grey cigarette jeans : £49 (was £98) Men's printed t-shirt : £20 (was £40) How much will I pay for delivery? Standard UK delivery costs £2.95. All Saints Wil Beedle Creative Director Interview New Bag Line. 23 July 2015 Scarlett Conlon ALLSAINTS is a ubiquitous presence on international high streets but, as any fashion company will attest, you have to adapt to survive - something that creative director Wil Beedle is making sure happens this year as the brand celebrates its 21st birthday. 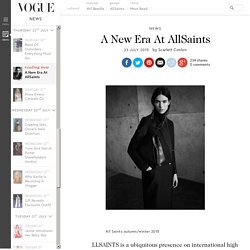 A new era of AllSaints beckons. AllSaints go marching in – UK label takes Gothic success story to NYC. When the fashion store Topshop opened in New York just over a year ago, a torrent of hype ensured there were queues of shoppers at the door on the first day. 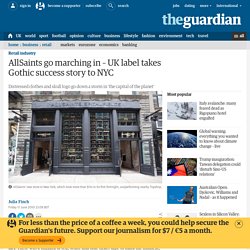 AllSaints. AllSaints is a British fashion retailer headquartered in London, UK.[1][2][3] AllSaints sells menswear, womenswear apparel, footwear, and accessories in over 145 stores, and 3,200 employees across 20 countries including the UK, France, USA, Canada, South Korea and Taiwan. 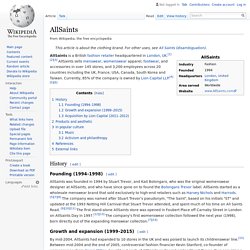 Currently, 85% of the company is owned by Lion Capital LLP.[4][5][6] History[edit] Founding (1994–1998)[edit] AllSaints was founded in 1994 by Stuart Trevor, and Kait Bolongaro, who was the original womenswear designer at AllSaints, and who have since gone on to found the Bolongaro Trevor label. Growth and expansion (1999–2015)[edit] AllSaints rapidly expanded globally in 2009-10.[9][20][21] That same year the company launched its U.S. In 2015 AllSaints launched its first stores in Taiwan and Dubai. Acquisition by Lion Capital (2011–2012)[edit] In April 2011, due to mismanagement by Kevin Stanford[according to whom?] Rag and Bone. Rag & Bone (less commonly: rag and bone) is an American fashion label helmed by Marcus Wainwright and David Neville, both originally from Britain.[1] The brand is sold in more than 700 shops around the world, as well as in rag & bone retail stores.[2] Background[edit] Rag & Bone was founded in 2002 by Nathan Bogle and Marcus Wainwright.[3] In 2004 the label launched with a men's line and a women's line followed in 2005. 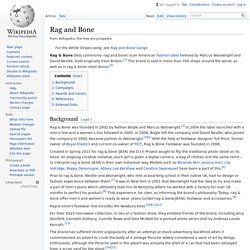 AllSaints Uses Real People As Models In Their Latest Campaign, And We Totally Dig It. What I love about moto jackets is their versatility — you can dress it up or down and everyone has their own way of styling the edgy piece. 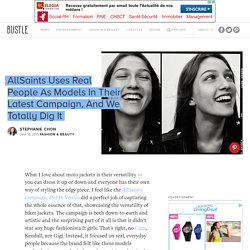 I feel like the AllSaints campaign, Def In Venice did a perfect job of capturing the whole essence of that, showcasing the versatility of biker jackets. The campaign is both down-to-earth and artistic and the surprising part of it all is that it didn’t star any huge fashionista It girls. That's right, no Cara, Kendall, nor Gigi. AllSaints Cast a Bunch of Real People in Their New Campaign. Leave it to iconic leather brand AllSaints to produce an entire campaign without casting a single It girl—and have it be the coolest thing we've seen all season. To capture the latest instalment in the brand's Biker Portraits series, photographer Wil Beedle wandered the streets of Venice, California, and shot the coolest folks he could find in biker jackets.

The results are fantastic. In an era when shooting big-name models is par for the course for fashion brands, we love the guerrila style of putting normal folks in front of the lens. Since real people are going to be wearing their clothes, it follows logic that brands would want to show off just such folks in their designs. All Saints – Brand Profile « Stylelogue. The British Brand That Claims To Blend Music And Fashion Into A Potent Mix Of Desirable Clothing Expressing Both Individuality And Attitude All Saints is considered to be one of the hippest retailers on the British high street.