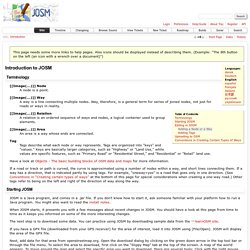 JOSM/Photomapping. Available languages — JOSM Screenshot, showing photos arranged along a GPS trace Photomapping In JOSM allows you to work with photos on screen, positioned alongside the map data in the editor. 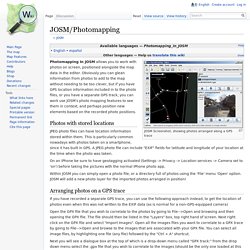 Obviously you can glean information from photos to add to the map without needing to be too clever, but if you have GPS location information included in to the photo files, or you have a separate GPS track, you can work use JOSM's photo mapping features to see them in context, and perhaps position new elements based on the recorded photo positions. Photos with stored locations JPEG photo files can have location information stored within them. On an iPhone be sure to have geotagging activated (Settings -> Privacy -> Location services -> Camera set to 'on') before taking the pictures with the normal iPhone photo app. Within JOSM you can simply open a photo file, or a directory full of photos using the 'File' menu 'Open' option. 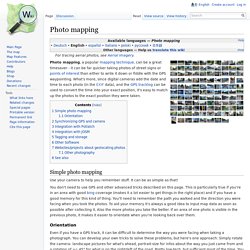 Photo mapping, a popular mapping technique, can be a great timesaver - it can be far quicker taking photos of street signs or points of interest than either to write it down or fiddle with the GPS waypointing. What's more, since digital cameras add the date and time to each photo (in the EXIF data), and the GPS tracklog can be used to convert the time into your exact position, it's easy to match up the photos to the exact position they were taken. Simple photo mapping Use your camera to help you remember stuff. Documentation. API Reference This reference reflects Leaflet 0.7. 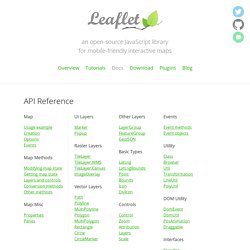 Docs for 0.6 are available in the source form (see instructions for running docs). Map. Import Geotagged Photographs into ArcMap. By Mark Romero Esri Imagery Team You can easily import geotagged digital photographs into your map and integrate them directly into your existing geodatabase using the new GeoTagged Photos To Points tool available in ArcMap 10.1. 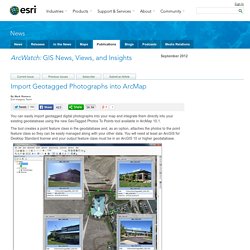 The tool creates a point feature class in the geodatabase and, as an option, attaches the photos to the point feature class so they can be easily managed along with your other data. You will need at least an ArcGIS for Desktop Standard license and your output feature class must be in an ArcGIS 10 or higher geodatabase. Import photos from your smartphone into ArcMap using the new GeoTagged Photos To Points tool. Bentley Geospatial Management: Spatially Relating All Your Content in ProjectWise.

ProjectWise Geospatial Management extends the ProjectWise environment with a geospatial view and gives geospatial context to any information. 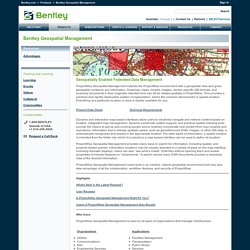 Drawings, maps, models, images, vendor-specific GIS formats, and business documents in their originally intended form can all be related spatially in ProjectWise. This provides a practical and rapidly deployable system of organization, where the common denominator is spatial location. Everything at a particular location or area is readily available for you. Dynamic and interactive map-based interfaces allow users to intuitively navigate and retrieve content based on location. ExifTool by Phil Harvey. Read, Write and Edit Meta Information! 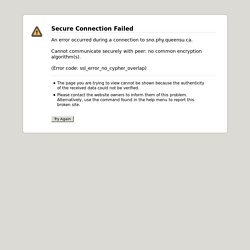 ExifTool is also available as a stand-alone Windows executable and a Macintosh OS X package: (Note that these versions contain the executable only, and do not include the HTML documentation or other files of the full distribution above.) Features. GeoTag: An OS X Application to tag photo locations. GeoTag Version 3 GeoTag Version 3.3 Screenshot GeoTag is a free OS X application that allows you to update image metadata with geolocation tags by panning and zooming in a map window and then clicking on the location where a photo was taken. 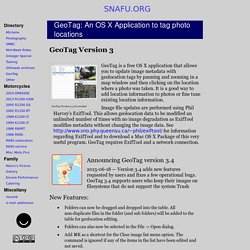 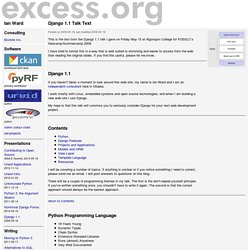 This is the text from the Django 1.1 talk I gave on Friday May 15 at Algonquin College for FOSSLC's Geocamp/Summercamp 2009. I have tried to format this in a way that is well suited to skimming and easier to access from the web than reading the original slides. GeoDjango: Putting Django on the Map. SeaSketch. GeoDjango: Putting Django on the Map. SeaSketch. AN ENHANCED GIS PACKAGE FEAURING IMPROVED LIDAR TOOLS FROM BLOM. Blom has released v3.5 of its desktop geospatial application, BlomDESKTOP, including significant improvements to LiDAR functionalities. 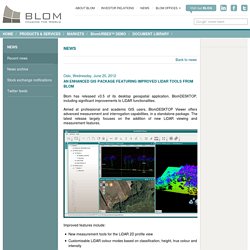 Core Features. Publishing interactive web maps using QGIS. We all know that QGIS is great for designing maps but did you know that QGIS is also great for interactive web maps? It is! Just check out qgis2leaf and qgis2threejs. To give these two plugins a test run and learn some responsive web design, I developed a small concept page presenting cycle routes in 3D. Qgis2leaf makes it possible to generate Leaflet maps from QGIS layers. It provides access to different background maps and it’s easy to replace them in the final HTML file in case you need something more exotic.