NAVVIS – Indoor Positioning and Mapping. AniMove - Animal Movements: A collaborative project — Faunalia - free and open source GIS. The analysis of animal movement and ranging behaviour (including the estimation of home range size) is a complex issue. 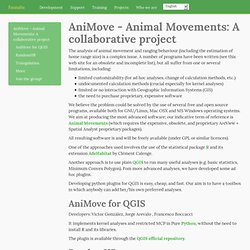 A number of programs have been written (see this web site for an obsolete and incomplete list), but all suffer from one or several limitations, including: limited customizability (for ad hoc analyses, change of calculation methods, etc.)undocumented calculation methods (crucial especially for kernel analyses)limited or no interaction with Geographic Information Systems (GIS)the need to purchase proprietary, expensive software We believe the problem could be solved by the use of several free and open source programs, available both for GNU/Linux, Mac OSX and MS Windows operating systems.

We aim at producing the most advanced software; our indicative term of reference is Animal Movements (which requires the expensive, obsolete, and proprietary ArcView + Spatial Analyst proprietary packages). Developing python plugins for QGIS is easy, cheap, and fast. Markaeology: How to create a Digital Elevation Model from Photosynth point clouds. Recent developments in the Open Source community have made it easier to create 3D models from point cloud data derived from Structure from Motion (SfM) technologies such as Photosynth and Bundler. 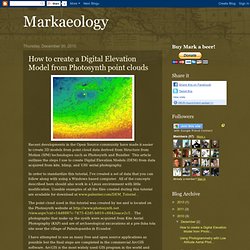 This article outlines the steps I use to create Digital Elevation Models (DEM) from data acquired from kite, blimp, and UAV aerial photography. In order to standardize this tutorial, I've created a set of data that you can follow along with using a Windows based computer. All of the concepts described here should also work in a Linux environment with little modification. Useable examples of all the files created during this tutorial are available for download at www.palentier.com/DEM_Tutorial . I have attempted to use as many free and open source applications as possible but the final steps are completed in the commercial ArcGIS software.

The software needed for this tutorial are: Dr Matt Nolan. 01 January 2014 Santa got me a UAV for Christmas. 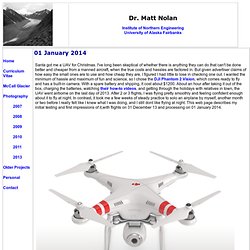 I've long been skeptical of whether there is anything they can do that can't be done better and cheaper from a manned aircraft, when the true costs and hassles are factored in. But given advertiser claims of how easy the small ones are to use and how cheap they are, I figured I had little to lose in checking one out. I wanted the minimum of hassle and maximum of fun and science, so I chose the DJI Phantom 2 Vision, which comes ready to fly and has a built-in camera. 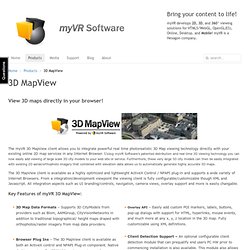 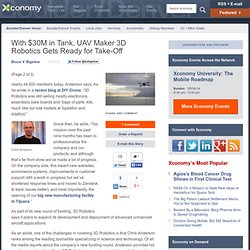 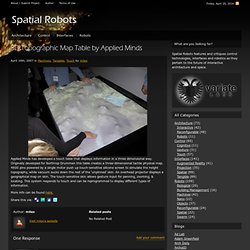 Originally developed for Northrop Grummen this table creates a three-dimensional tactile physical map. 4600 pins powered by a single motor push up touch-sensitive silicone screen to simulate the height topography, while vacuum sucks down the rest of the ‘unpinned’ skin. An overhead projector displays a geographical map on skin. The touch-sensitive skin allows gesture input for panning, zooming, & locating. This system responds to touch and can be reprogrammed to display different types of information. More info can be found here. 3D Mapping & 3D Modeling Market worth $7.7 Billion by 2018. DALLAS, March 13, 2013 /PRNewswire/ -- According to a new market research report "3D Mapping Market: Global Advancements, Business Models, Technology Roadmap, Forecasts and Analysis (2013 - 2018)", the 3D mapping and 3D modeling market is expected to reach $7.7 billion by 2018 at a CAGR of 47.9% from 2013 to 2018. 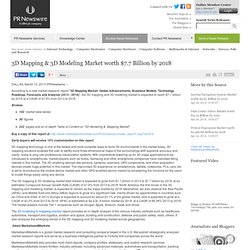 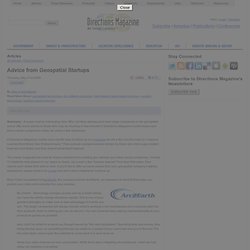