Jeroboam II. Seal belonging to "Shema, Servant of Jeroboam" found at Megiddo Jeroboam II (ירבעם השני) was the the fourteenth king of the ancient Kingdom of Israel, over which he ruled for 41 years (2 Kings 14:23). 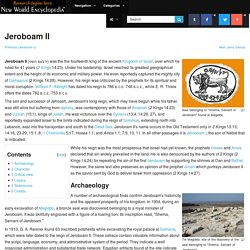 Under his leadership, Israel reached its greatest geographical extent and the height of its economic and military power. He even reportedly captured the mighty city of Damascus (2 Kings 14:28). However, his reign was criticized by the prophets for its spiritual and moral corruption. William F. The son and successor of Jehoash, Jeroboam's long reign, which may have begun while his father was still alive but suffering from leprosy, was contemporary with those of Amaziah (2 Kings 14:23) and Uzziah (15:1), kings of Judah. 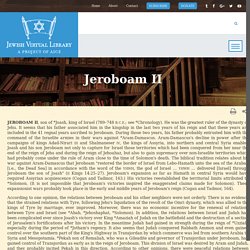 He was the greatest ruler of the dynasty of Jehu. It seems that his father associated him in the kingship in the last two years of his reign and that these years are included in the 41 regnal years ascribed to Jeroboam. During those two years, his father probably entrusted him with the command of the Israelite armies in their wars against *Aram-Damascus. A Tale of Twelve Brothers: Historical Symbolism and the Position of the Tribe... Bible Review June 1996: P—Understanding the Priestly Source. As readers of Bible Review know, these letters designate the various literary components making up the Five Books of Moses. 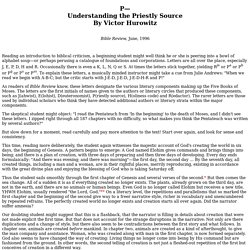 The letters are the first initials of names given to the authors or literary circles that produced these components, such as J(ahwist), E(lohist), D(euteronomist), P(riestly source), H(oliness code) and R(edactor). The rarer letters are those used by individual scholars who think they have detected additional authors or literary strata within the major components. The skeptical student might object: "I read the Pentateuch from 'In the beginning' to the death of Moses, and I didn't see these letters. I zipped right through all 187 chapters with no difficulty, so what makes you think the Pentateuch was written by several authors?

" But slow down for a moment, read carefully and pay more attention to the text! Priestly Document. Story Line. 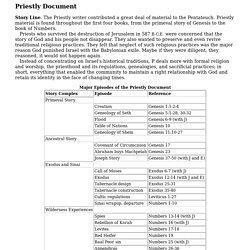 Priestly writer judges. The Priestly source (or simply P) is, according to the documentary hypothesis, one of four sources of the Torah,[1] together with the Jahwist, the Elohist and the Deuteronomist. 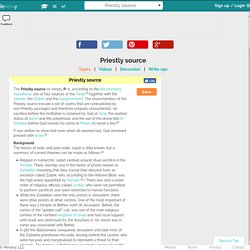 The characteristics of the Priestly source include a set of claims that are contradicted by non-Priestly passages and therefore uniquely characteristic: no sacrifice before the institution is ordained by God at Sinai, the exalted status of Aaron and the priesthood, and the use of the divine title El Shaddai before God reveals his name to Moses, to name a few.[2] P was written to show that even when all seemed lost, God remained present with Israel.[3] Background The history of exilic and post-exilic Judah is little known, but a summary of current theories can be made as follows:[4]

Welcome to Biblical Criticism Online. Priestly Source (P): Sketch P is the Pentateuchal (and to a much lesser extent the prophetical) source most concerned with the priests, the temple, and the organization of cult, and organization in general. 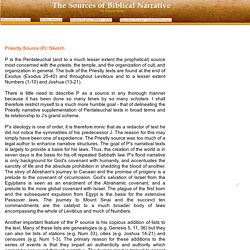 The bulk of the Priestly texts are found at the end of Exodus (Exodus 25-40) and throughout Leviticus and to a lesser extent Numbers (1-10) and Joshua (13-21). There is little need to describe P as a source in any thorough manner because it has been done so many times by so many scholars. I shall therefore restrict myself to a much more humble goal - that of delineating the Priestly narrative supplementation of Pentateuchal texts in broad terms and its relationship to J's grand scheme. 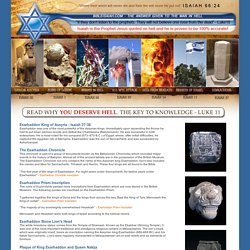 Immediately upon ascending the throne he had to put down serious revolts and defeat the Chaldaeans (Babylonians). He was successful in both enterprises. He is most noted for his conquest (673–670 B.C.) of Egypt, where, after initial difficulties, he captured the egyptian city of Memphis. The Holiness-Code and Ezekiel: Paton. The Presbyterian and Reformed Review, 26 (1896) 98-115. 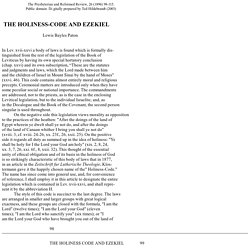 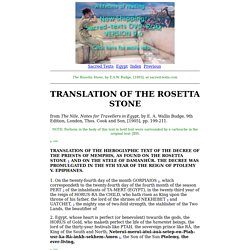 Budge, [1893], at sacred-texts.com from The Nile, Notes for Travellers in Egypt, by E. A. Wallis Budge, 9th Edition, London, Thos. NOTE: Portions in the body of this text in bold font were surrounded by a cartouche in the original text--JBH. p. 199 1. 2. P. 200. DestructionMankind. Famine Stela - Wikipedia. The Famine Stela, some carved sections are missing. 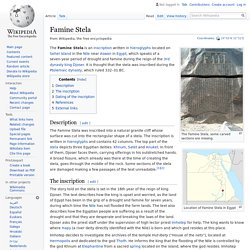 Location of Famine Stela in Egypt The Famine Stela is an inscription written in hieroglyphs located on Sehel Island in the Nile near Aswan in Egypt, which speaks of a seven-year period of drought and famine during the reign of the 3rd dynasty king Djoser. It is thought that the stela was inscribed during the Ptolemaic dynasty, which ruled 332–31 BC. Description[edit] Tale of Two Brothers - Wikipedia. Sheet from the Tale of Two Brothers, Papyrus D'Orbiney, British Museum The Tale of Two Brothers is an ancient Egyptian story that dates from the reign of Seti II, who ruled from 1200 to 1194 BC during the 19th Dynasty of the New Kingdom.[1] The story is preserved on the Papyrus D'Orbiney,[2] which is currently preserved in the British Museum.[3] Synopsis[edit] Bata states that he is going to the Valley of the Cedar, where he will place his heart on the top of the blossom of a cedar tree, so that if it is cut down Anpu will be able to find it and allow Bata to become alive again.

Bata tells Anpu that if he is ever given a jar of beer that froths, he should know to seek out his brother. After hearing of his brother's plan, Anpu returns home and kills his wife. Ipuwer Papyrus - Wikipedia. The Song of Deborah. How Old Is the Song of Deborah? The Hebrew Bible credits Deborah not only with starting an uprising that freed Israel from oppression but also with composing and performing a song that celebrates the victory. Many scholars claim that this song, found in chapter 5 of the book of Judges, is one of the oldest existing biblical texts.

They often date it to the 11th or even 12th century B.C.E., hundreds of years earlier than the rest of the book of Judges. But is there any evidence that Deborah’s song is really that old? One possible window on the text’s date is its language. Take a quick look at the U.S. Another clue is what the text says, intentionally or unintentionally, about the author’s world.

Moses, the Bronze Serpent, and Bible Kundalini - The Spirit of the Scripture. Have you ever wondered why Moses had to “lift up” the bronze snake in the wilderness in order for the Israelites to be healed? This is perhaps one of the most puzzling scriptures in the entire Bible. Pastors and Bible study teachers alike have been stumped as to why it is there, and it seems that traditional Christianity has no proper explanation. Is there one? Yes, but the answer lies beyond the literal interpretation, and it contains a wonderful spiritual truth! Nehushtan. Back to Home Page or Contents Page or Judaism or Index Nehushtan Nehushta (Hebrew, NChShThN, "brass object") is the serpent of brass made by Moses and placed on a pole (Numbers 21:8-9) to cure the Israelites of the venomous bites of the fiery serpents in the wilderness. The word Nehushtah "thing of brass" contains a Hebrew pun, the first three letters, NChSh, mean "serpent" and the final two, ThN, mean "dragon.

" The Serpent of Life and Wisdom. By Estelle Nora Harwit Amrani November, 1998 from Vibrani Website recovered through BibliothecaAlexandrina Website. Khirbet Qeiyafa Archaeological Project. Khirbet Qeiyafa - Wikipedia. Coordinates: Open Yale Courses. Chapter 1. Assyrian empire builders - Shalmaneser V, king of Assyria (726-722 BC) The chosen heir of his father Tiglath-pileser III (744-727 BC), Shalmaneser V was king of Assyria and king of Babylon. But his reign lasted less than five years and ended in a succession war which brought his brother, Sargon II (721-705 BC), to power. Balaam and His Talking Donkey. The Tale of the Prophet Isaiah: The Destiny and Meanings of an Apocryphal Tex... Isaiah. The prophet Isaiah in the Old Testament. Isaiah 1-39: Politician and Prophet. First Isaiah Isaiah is a prophet who lived during the time of Kings Uzziah, Jotham, Ahaz, and Hezekiah of Judah. This was a tumultuous time - as times tend to be when prophets appear. Isaiah ben Amoz: Political Prophet (Isaiah: 1-39)