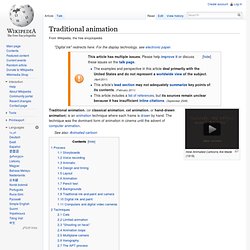 The technique was the dominant form of animation in cinema until the advent of computer animation. Process[edit] Storyboards[edit] Voice recording[edit] Before true animation begins, a preliminary soundtrack or "scratch track" is recorded, so that the animation may be more precisely synchronized to the soundtrack. In the case of most pre-1930 sound animated cartoons, the sound was post-synched; that is, the sound track was recorded after the film elements were finished by watching the film and performing the dialogue, music, and sound effects required.

Animatic[edit] Often, an animatic or story reel is made after the soundtrack is created, but before full animation begins. Advertising agencies today employ the use of animatics to test their commercials before they are made into full up spots. Character Animation. BFA Only The Program in Character Animation is designed for students who seek an understanding of the art of character performance and storytelling in animation. 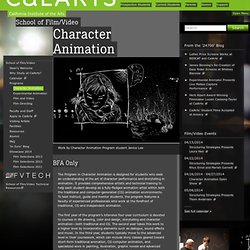 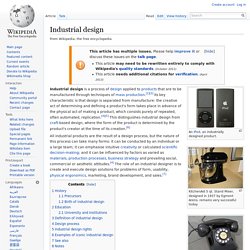 KitchenAid 5 qt. Stand Mixer, designed in 1937 by Egmont Arens, remains very successful today Western Electric Model 302 telephone, found throughout the United States from 1937 until the introduction of touch-tone dialing.[1] Calculator Olivetti Divisumma 24 designed in 1956 by Marcello Nizzoli All industrial products are the result of a design process, but the nature of this process can take many forms: it can be conducted by an individual or a large team; it can emphasise intuitive creativity or calculated scientific decision-making; and it can be influenced by factors as varied as materials, production processes, business strategy and prevailing social, commercial or aesthetic attitudes. History[edit] Core77 / industrial design magazine + resource / home.

Teague - DESIGN THIS DAY. Arnout Visser's Brilliant Fluid-Based Tableware Designs. Dutch designer and self-described "formfinder" Arnout Visser has incorporated a keen observation of fluids into the design of his products. 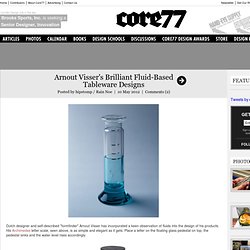 His Archimedes letter scale, seen above, is as simple and elegant as it gets: Place a letter on the floating glass pedestal on top, the pedestal sinks and the water level rises accordingly. His Salad Sunrise cruet combines the oil and vinegar into one container. As the former is lighter than the latter, the two fluids never mix; placing spouts on opposite sides and at the appropriate heights allows you to pour them separately. The Water Loep is a simple magnifying glass consisting of a blown glass form filled with water, which provides the magnification. His Condensation Bowls have a small amount of water permanently trapped in the space between the inner and outer walls. Check out more of Visser's stuff here. Volkswagen's Crowdsourced Chinese Hovercraft Concept. China is known as the place where a superstar foreign architect can win an international design competition and see their bold, dazzling creation actually see construction. 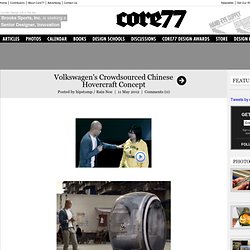 Volkswagen has turned this model on its head for their yearlong The People's Car Project, which sought concepts for future vehicles not from superstar designers, but from the great, and local, masses. Chinese citizens could access a Chinese-language Volkswagen portal to upload ideas for transportation concepts they'd like to see, and by the 11-month mark, 33 million people had visited the site.

Here's the PCP's fun pitch video: Schoolgirl Wang Jia of Chengdu was one of the first winners, and while her hovercraft idea would be a bit difficult to produce, Volkswagen did what they could—and even incorporated her parents, in keeping with the family-centric nature of Chinese society: Industrial Design Served. Ring /// fruitbowl on Industrial Design Served. 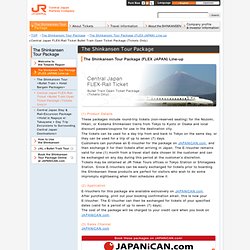 The tickets can be used for a day trip from and back to Tokyo on the same day, or they can be used for a trip of up to seven (7) days. Customers can purchase an E-Voucher for the package on JAPANiCAN.com, and then exchange it for their tickets after arriving in Japan. The E-Voucher remains valid for one (1) month from a travel start date chosen bt the customer and can be exchanged on any day during this period at the customer‘s discretion. Tickets may be obtained at JR Tokai Tours offices in Tokyo Station or Shinagawa Station. . (2) Application E-Vouchers for this package are available exclusively on JAPANiCAN.com. . (3) Sales Channel JAPANiCAN.com * Visit the sales channels mentioned above for more information such as application deadlines and blackout dates. JR-EAST - East Japan Railway Company. Fares & Passes. West Japan Railway Company.