Genome BC and City of Vernon partner for urban stream health: Genomic-based water test offers new insights. Vancouver, BC – The City of Vernon is partnering with Genome BC and the University of Victoria on an innovative research project to identify threats to the health of streams in the community. 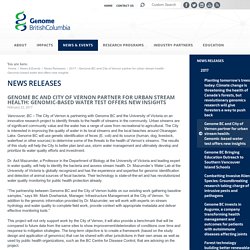 Vernon, U Vic, and Genome BC to Partner on Stream Health - Water Canada. The City of Vernon is partnering with Genome BC and the University of Victoria on an innovative research project to identify threats to stream health in the community. 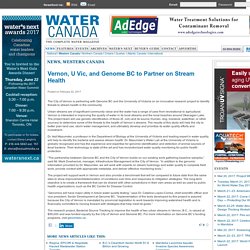 Urban streams are of significant community value and the water has a range of uses from recreational to agricultural. Vernon is interested in improving the quality of water in its local streams and the local beaches around Okanagan Lake. The project team will use genetic identification of feces (E. coli) and its source (human, dog, livestock, waterfowl, or other sources) to determine some of the threats to the health of Vernon’s streams. The results of this study will help the city to better plan land use, storm water management, and ultimately develop and prioritize its water quality efforts and investment. Where is the poop in Vernon's water coming from? Genetic testing aims to find out. The City of Vernon, B.C. is turning to genetic testing to determine the source of the E. coli that's been contaminating local water. 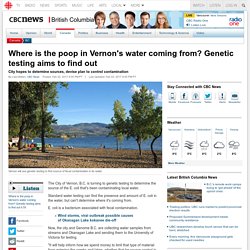 Standard water testing can find the presence and amount of E. coli in the water, but can't determine where it's coming from. E. coli is a bacterium associated with fecal contamination. Wind storms, viral outbreak possible causes of Okanagan Lake kokanee die-off. CBC RadioOne Feces Feb22. Poop tests for local streams - Vernon News. Photo: Kate Bouey Scientists are lending a hand in the City of Vernon's effort to improve water quality in local streams and beaches around Okanagan Lake. 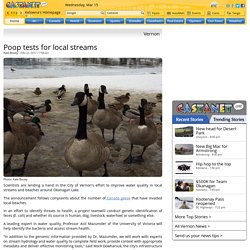 The announcement follows complaints about the number of Canada geese that have invaded local beaches. In an effort to identify threats to health, a project teamwill conduct genetic identification of feces (E. coli) and whether its source is human, dog, livestock, waterfowl or something else. A leading expert in water quality, Professor Asit Mazumder of the University of Victoria will help identify the bacteria and assess stream health. “In addition to the genomic information provided by Dr.

“Genomics will have major utility in future water quality testing,” said Catalina Lopez-Correa, vice president at Genome BC. The problem with geese - Vernon News. Photo: Jayne Withnall The geese have taken over Kin Beach and Vernon councillor Scott Anderson would like to change that. 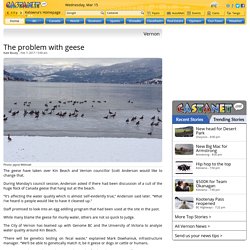 During Monday's council session, Anderson asked if there had been discussion of a cull of the huge flock of Canada geese that hang out at the beach. “It's affecting the water quality which is almost self-evidently true,” Anderson said later. “What I've heard is people would like to have it cleaned up.” Staff promised to look into an egg addling program that had been used at the site in the past. While many blame the geese for murky water, others are not so quick to judge. The City of Vernon has teamed up with Genome BC and the University of Victoria to analyze water quality around Kin Beach. “There will be genetics testing on fecal waste,” explained Mark Dowhaniuk, infrastructure manager.

“We're timing the sampling in the spring during the freshet, the spring runoff.” Samples will be taken at various times throughout the three-year project, Dowhaniuk explained. Water quality under greater scrutiny - Vernon News. Creeks are getting some attention in Vernon. 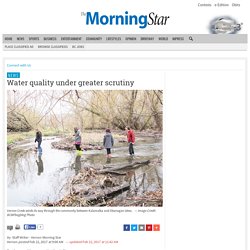 The City of Vernon is partnering with Genome B.C. and the University of Victoria on a research project to identify threats to the health of streams in the community. “The partnership between Genome B.C. and the city builds on our existing work gathering baseline samples,” said Mark Dowhaniuk, the city's manager of infrastructure management. “In addition to the genomic information provided, we will work with experts on stream hydrology and water quality to complete field work, provide context with appropriate metadata and deliver effective monitoring tools.”