| California based and #1 since 1979 Genie Scientific is the only single source fully vertical one stop metal manufacturer dedicated to the R&D, pharmaceutical, industrial, and healthcare industries.

Nine Must-Have Safety Products for a Standard Laboratory. Standard laboratories provide business and government with facilities to conduct important testing and research and allow students to get hands-on training to develop needed skills in STEM occupations. 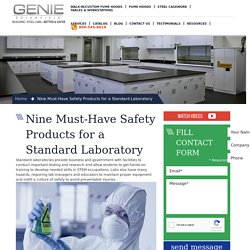 Labs also have many hazards, requiring lab managers and educators to maintain proper equipment and instill a culture of safety to avoid preventable injuries. More than 500,000 people in the U.S. work in laboratories, and millions of students learn scientific procedures and methods in labs every day. Because so many people work and study in labs, and because of the hazards present, a significant number of people are injured each year in laboratory accidents. 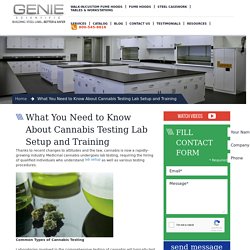 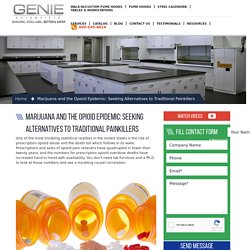 Prescriptions and sales of opioid pain relievers have quadrupled in fewer than twenty years, and the numbers for prescription opioid overdose deaths have increased hand-in-hand with availability. You don’t need lab furniture and a Ph.D. to look at those numbers and see a troubling causal correlation. U.S. Government Cancer Research Project Discovers Marijuana Kills Cancer Cells. U.S. 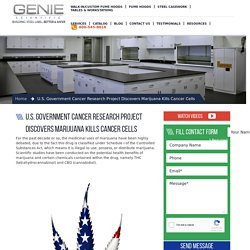 Government Cancer Research Project Discovers Marijuana Kills Cancer Cells For the past decade or so, the medicinal uses of marijuana have been highly debated, due to the fact this drug is classified under Schedule I of the Controlled Substances Act, which means it is illegal to use, possess, or distribute marijuana. Scientific studies have been conducted on the potential health benefits of marijuana and certain chemicals contained within the drug, namely THC (tetrahydrocannabinol) and CBD (cannabidiol).

Scientists and researchers have performed a variety of studies using different types of laboratory configurations, where lab furniture, lab benches, lab tables, and other pieces are arranged to accommodate the test subjects, most frequently rats and mice. These configurations allow researchers to easily distinguish between the subjects and ensure accurate results when comparing outcomes between the placebo group and those administered marijuana or derivatives of its chemicals. 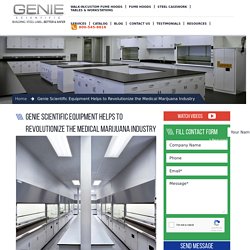 Dr. Oz recently took a sneak peek at one of these cutting-edge marijuana processing plants, and the segment revealed something interesting: At least one trailblazing company uses our advanced chemical hoods to ensure the safety of the laboratory environment during the production process. If you’ve ever wanted to see a Genie Scientific fume hood in action, you’re in luck. Keep reading to learn more about the innovative manufacturing process and the lab equipment that makes it possible. Choosing the Right Fume Hood. Choosing the Right Fume Hood When working in a laboratory environment, it’s not only important to have a properly functioning fume hood at your disposal and a lab worker that knows how to use it, it’s crucial to have the right one for your intended use in order to ensure the safety of everyone in the lab. 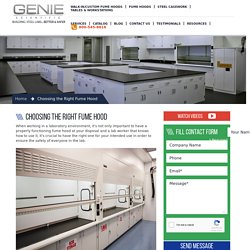 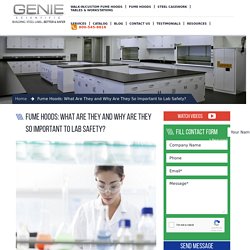 In December of 2008, a staff researcher named Sheri Sangji was working in a UCLA chemistry lab when a terrible accident occurred. As she was transferring a substance known as tert-butyl lithium, the syringe carrying the chemical broke apart, releasing flammable material onto her clothes and skin. As soon as the tert-butyl lithium came into contact with the surrounding oxygen, it ignited, burning over 40 percent of Sangji’s body.

Less than three weeks later, she succumbed to second and third-degree burns and died in the hospital. A number of such tragic accidents have occurred over the years in research labs across the world. Danger! Toxic Chemicals: Guidelines for Laboratory Safety. Whether they’re pioneering new cancer-fighting drugs or investigating the latest deadly pathogens, lab employees are at the forefront of critical discoveries in the pharmaceutical, biomedical, and technology industries. 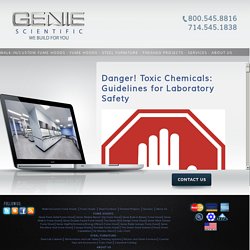 They are the ones who perform cutting-edge experiments on infectious microbes or conduct critical research on advanced drug therapies. They are the ones who advance the fields of science and medicine. Unfortunately, the work of laboratory technicians also exposes them to a diverse set of hazards, from airborne diseases to centrifuge explosions. Foremost among those dangers is exposure to toxic chemicals.