The Lovers in the Upstairs Room 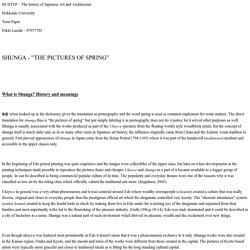 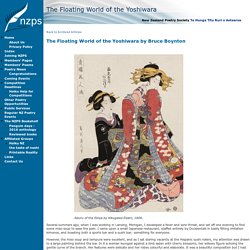 Several summers ago, when I was working in Lansing, Michigan, I developed a fever and sore throat, and set off one evening to find some miso soup to ease the pain. I came upon a small Japanese restaurant, staffed entirely by Occidentals in badly fitting imitation kimonos, and boasting both a sports bar and a sushi bar; something for everyone. Woodblock Prints in the Ukiyo-e Style. Chonmage - Wikipedia. Portrait of a man with chonmage haircut from the Edo period Modern sumo wrestler with a oicho style chonmage The chonmage (丁髷, ちょんまげ) is a form of Japanese traditional topknot haircut worn by men. 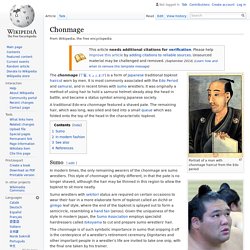 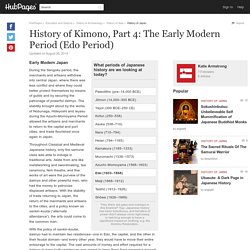 One of those changes was a structural change. Early Edo kosode had small sleeves, often sewn directly to the body of the kimono (though not always--individual kimono makers might construct the sleeves a little bit differently, so some were free in the sleeve drop). Japan - It's A Wonderful Rife: Ukiyo - The Edo-Era World Of Prostitution: The Yoshiwara. I have often written about ukiyo-e (浮世絵), the Japanese wood block prints that have helped define Japan throughout the Edo period (1603-1868AD), but not once have I delved into what ukiyo (浮世 - "Floating World") is. 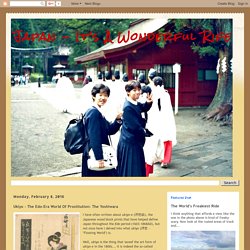 Well, ukiyo is the thing that 'saved' the art form of ukiyo-e in the 1800s... it is indeed the so-called 'floating world', but what it really means is that it's the world of legalized prostitution in Japan. I've written about prostitution in Japan a few times - just look to the right of this blog under favorites... but the world of Edo-era prostitution is a lesson in that era's moral center. I guess it's part of any era's moral center. Courtesans - SamuraiWiki. Mannequins of the courtesan Agemaki and her kamuro (child attendant) from the kabuki play Sukeroku. 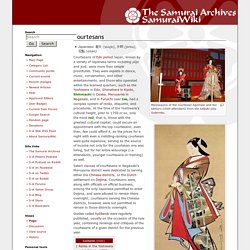 Japanese: 遊女 (yuujo), 女郎 (jorou), 花魁 (oiran) Select classes of courtesans in Nagasaki's Maruyama district were dedicated to serving either the Chinese districts, or the Dutch settlement on Dejima. Imaging Japanese History. Tokugawa Japan: An Introductory Essay by Marcia Yonemoto, University of Colorado at Boulder Sir George Sansom’s history of Japan was first published in 1932 and used in U.S. college classrooms into the 1980s. 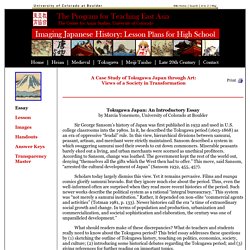 In it, he described the Tokugawa period (1603-1868) as an era of oppressive “feudal” rule. In this view, hierarchical divisions between samurai, peasant, artisan, and merchant were strictly maintained. Sansom described a system in which swaggering samurai used their swords to cut down commoners. Miserable peasants barely eked out a living, and urban merchants were scorned as unethical profiteers. Don’t Confuse Geisha and Courtesans (Oiran and Tayu) It is apparent from my forays around Pinterest and the web that images of geisha and courtesans are often mislabeled. 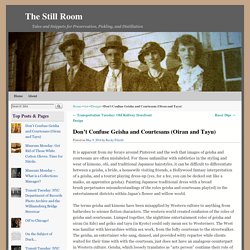 For those unfamiliar with subtleties in the styling and wear of kimono, obi, and traditional Japanese hairstyles, it can be difficult to differentiate between a geisha, a bride, a housewife visiting friends, a Hollywood fantasy interpretation of a geisha, and a tourist playing dress-up (yes, for a fee, you can be decked out like a maiko, an apprentice geisha). Painting Japanese traditional dress with a broad brush perpetuates misunderstandings of the roles geisha and courtesans play(ed) in the entertainment districts within Japan’s flower and willow world. The terms geisha and kimono have been misapplied by Western culture to anything from bathrobes to science fiction characters. The western world created confusion of the roles of geisha and courtesans. Here is a very brief comparison of oiran, geisha (known as geiko in Kyoto), and maiko: Main Page - ImmortalGeisha. Geisha and Oiran in Japan: What's the difference? This question originally appeared on Quora. 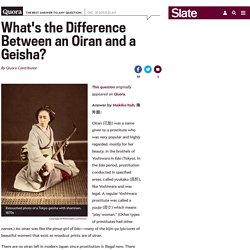 Answer by Makiko Itoh, 海外組: Oiran (花魁) was a name given to a prostitute who was very popular and highly regarded, mostly for her beauty, in the brothels of Yoshiwara in Edo (Tokyo). In the Edo period, prostitution conducted in specified areas, called yuukaku (遊郭), like Yoshiwara and was legal. Encyclopedia of Hair: A Cultural History - Victoria Sherrow. LIFE IN THE EDO PERIOD (1603-1867) Edo (Tokyo) was made the capital of Japan by the Tokugawa shogunate. 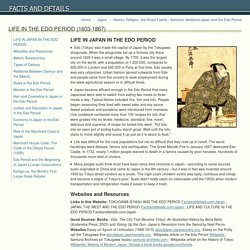 When the shogunate set up a fortress city there around 1600 it was a small village. By 1700, it was the largest city on the world, with a population of 1,200,000, compared to 800,000 in London and 500,000 in Paris at that time. Edo society was very urbanized. Gender Expectations of Edo Period Japan - Japan Powered. The Edo period made Japan Japan. This long segment of peace shaped Japanese gender expectations and continues to influence them today. Japan was once a matriarchal society.

"Edo Graphics" Undefined text & line drawings, copyright 1997 by Lady Melisande of Hali This is a scheme of a kimono, laid out flat. And very flat they do lie. There are no curves or lumps built into them, so that they fold up neatly for storage. Utamaro, passionné de beauté. Symbolism of Japanese Fans. Lovers in an Upstairs Room from Utamakura by Kitagawa Utamaro. Lovers from the series Poems of the Pillow by Kitgawa Utamaro (1788) My featured artist in My Daily Art Display today is Kitagawa Utamaro the Japanese printmaker and painter. Utamaro was born in Edo, which is the former name of the present day Tokyo, in 1753. TOKYO KNOWLEDGE : EDO LIFE - Love and Marriage in the Edo Period. Art of the Pleasure Quarters and the Ukiyo-e Style.