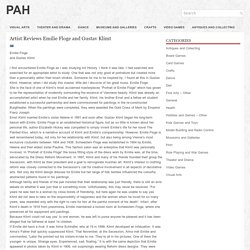 I think it was fate. I had searched and searched for an appropriate artist to study. One that was not only good at portraiture but created more than a personality within their brush strokes. Someone for me to be inspired by; I found all this in Gustav Klimt. NGV Vienna Art and Design: Emilie Flöge. Anarchists of Style: Emilie Flöge – Worn Through. “It’s my life. 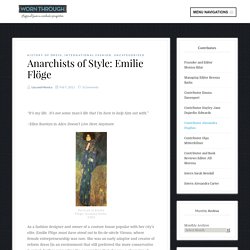 It’s not some man’s life that I’m here to help him out with.” –Ellen Burstyn in Alice Doesn’t Live Here Anymore Portrait of Emilie Flöge, Gustave Klimt, 1902 As a fashion designer and owner of a couture house popular with her city’s elite, Emilie Flöge must have stood out in fin-de-siècle Vienna, where female entrepreneurship was rare.

She was an early adaptor and creator of reform dress (in an environment that still preferred the more conservative S-curve), further supporting the assumption that she was a character of note. Today, all research about Flöge seems to collapse into the importance of Gustave Klimt, her confidant of more than 20 years. Here, a brief look at a woman whom I imagine has more historic resonance than her press reveals. Emile Flöge, Madame d'Ora 1909 Her Story (What little we know) Flöge was born in 1874 and graduated from the School for Applied Arts. In a party dress Reception area of the Flöge salon. The last romantic. In a photograph taken outside his Vienna studio in the early 1910s, Gustav Klimt looks amiably at us, wearing a floppy smock and cuddling a black-and-white cat. 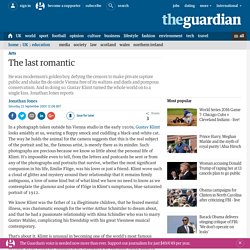 The way he holds the animal for the camera suggests that this is the real subject of the portrait and he, the famous artist, is merely there as its minder. Such photographs are precious because we know so little about the personal life of Klimt. It's impossible even to tell, from the letters and postcards he sent or from any of the photographs and portraits that survive, whether the most significant companion in his life, Emilie Flöge, was his lover or just a friend. Klimt wove such a cloud of glitter and mystery around their relationship that it remains firmly ambiguous, a love of some kind but of what kind we have no need to know as we contemplate the glamour and poise of Flöge in Klimt's sumptuous, blue-saturated portrait of 1912.

That's about it. This modern masterpiece is self-contained. Gustav Klimt Most Important Art. Adele Bloch-Bauer I (1907) Artwork description & Analysis: Of all the many women Klimt painted from life, Adele Bloch-Bauer, the wife of a Viennese banker (and Klimt's lover). 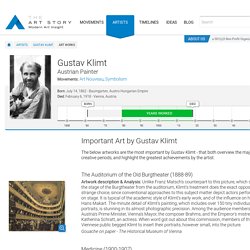 This, the first of the two portraits, is considered by many to be his finest work. The sitter is adorned with precious materials and ancient artifacts, suggesting her wealth and power; but her stare, and her grasping hands, also suggest that she is fragile (the disfigured finger on her right hand is concealed). Gustav Klimt - Symbolist Painter. The Vienna Secession Gustav Klimt was one of the founding members and president of the Vienna Secession (Wiener Sezession) in 1897 and of the group's periodical Ver Sacrum (Sacred Spring). 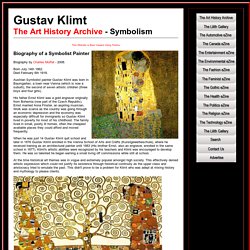 The group's goals were to provide exhibitions for unconventional young artists and to bring the best foreign artists works to Vienna. Klimt remained with the Secession group until 1908. A HISTORY. Art Nouveau Movement, Artists and Major Works. Synopsis Generating enthusiasts in the decorative and graphic arts and architecture throughout Europe and beyond, Art Nouveau appeared in a wide variety of strands, and, consequently, it is known by various names, such as the Glasgow Style, or, in the German-speaking world, Jugendstil. 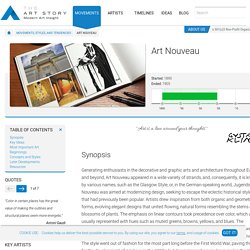 Art Nouveau was aimed at modernizing design, seeking to escape the eclectic historical styles that had previously been popular. A HISTORY. Beauty will save Emilie Floge and Gustav Klimt - Beauty will save. Gustav Klimt - The Kiss in Vienna. For Gustav Klimt, it was normal to work in his studio from early morning until evening without a break, and the year 1907 was no exception. 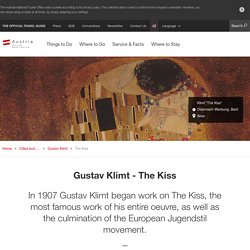 Before long, countless sketches covered the floor. But Klimt complained repeatedly about the difficulties of his work. Tulip Flower Meaning. Tulip Flower Meaning admin 2016-06-22T05:57:51+00:00 Rising up in the early summer to produce cup-shaped blossoms in all colors, the Tulip plays an important role in many home flower gardens. 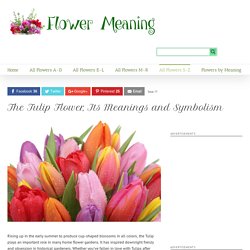 It has inspired downright frenzy and obsession in historical gardeners. Whether you’ve fallen in love with Tulips after strolling through thousands of acres in the Netherlands or a trip to the corner floral shop, you can learn more about the history of the world’s third most popular flower and what it symbolizes both yesterday and today. Forget Me Not Flower Meaning. Forget Me Not Flower Meaning admin 2016-06-17T20:30:19+00:00 It’s easy to overlook a wild clump of Forget Me Not because most plants produce small flowers. 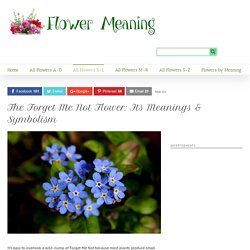 However, this humble plant has a rich history of meaning behind it. As a symbol of myth and history alike, it’s a worthwhile addition to your flower repertoire. Learn more about what the Forget Me Not symbolizes by taking a stroll down memory lane. What Does the Forget Me Not Flower Mean? Gustav Klimt,Le baiser,Analyse et explication du tableau. Gustav Klimt : Le Baiser. (1907 - 1908) Entre 1906 et 1909 Gustav Klimt peintre et graphiste autrichien symboliste et représentant de l’Art nouveau viennois recherche une autre expressivité pour ses oeuvres. 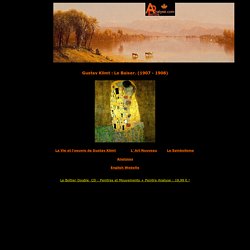 Klimt travelled little but trips to Venice and Ravenna, both famous for their beautiful mosaics, most likely inspired his gold technique and his Byzantine imagery. In 1904, he collaborated with other artists on the lavish Palais Stoclet, the home of a wealthy Belgian industrialist, which was one of the grandest monuments of the Art Nouveau age. Gustav Klimt - Painter. Synopsis. Behind the paint – ‘The Kiss’ by Gustav Klimt. Gustav Klimt ‘The Kiss’ by Gustave Klimt (b.1862 -1918 Vienna) was painted 1907 – 1908, it is probably the Viennese artist’s most famous work. Klimt trained at the school of Applied Arts in Vienna, but eventually broke away from the State’s patronage to form the Secession group with friends.

The group believed the promotion of the art of unconventional Austrian painters. The Kiss Klimt explorations of human relationships in his work was considered very ‘modern’ at the time. “Enough of censorship……I want to break free”