Resources for Lean Six Sigma (progressivedge.com) Eliminating the 9th Form of Waste. This is the first in a series on The People Side of Lean where we’ll explore trends and talent challenges faced by today’s manufacturing organizations as they strive to make the transformation to lean. 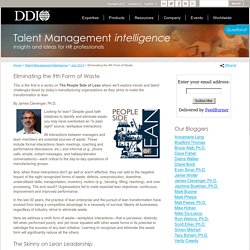 By James Clevenger, Ph.D. Looking for lean? Despite good faith initiatives to identify and eliminate waste, you may have overlooked an "in plain sight" source: workplace interactions. All interactions between managers and team members are potential sources of waste. These include formal interactions (team meetings, coaching and performance discussions, etc.) and informal (e.g., phone calls, emails, instant messages, and hallway/elevator conversations)—each critical to the day-to-day operations of manufacturing groups. 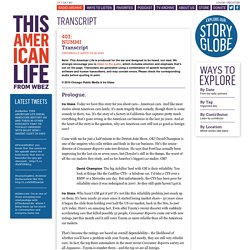 If you're just tuning in, we're in the middle of a story about a car plant in Fremont, California, called NUMMI. We now turn to the question, why was it so hard for GM to replicate NUMMI elsewhere in the company. What We Know Can Help You Grow: Composites Horizons (:60) Next frontiers for lean. When the first issue of McKinsey Quarterly rolled off the printing presses, 50 years ago, nearly everyone in senior management thought that manufacturing operations had been perfected. 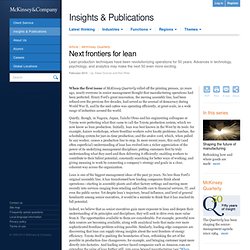 Henry Ford’s great innovation, the moving assembly line, had been refined over the previous five decades, had served as the arsenal of democracy during World War II, and by the mid-1960s was operating efficiently, at great scale, in a wide range of industries around the world. Quietly, though, in Nagoya, Japan, Taiichi Ohno and his engineering colleagues at Toyota were perfecting what they came to call the Toyota production system, which we now know as lean production. Gemba Glossary: The 5 Why. Why the Lean Start-Up Changes Everything. Photography: Courtesy of the artist and the Wallace Trust Artwork: Sara Hughes, Download, 2005, acrylic on linen, 1.5 m x 1.5 m, Wallace Trust Collection Launching a new enterprise—whether it’s a tech start-up, a small business, or an initiative within a large corporation—has always been a hit-or-miss proposition. 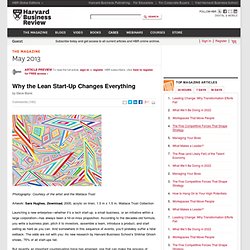 According to the decades-old formula, you write a business plan, pitch it to investors, assemble a team, introduce a product, and start selling as hard as you can. And somewhere in this sequence of events, you’ll probably suffer a fatal setback. The odds are not with you: As new research by Harvard Business School’s Shikhar Ghosh shows, 75% of all start-ups fail. But recently an important countervailing force has emerged, one that can make the process of starting a company less risky. The lean start-up movement hasn’t gone totally mainstream, however, and we have yet to feel its full impact. The Fallacy of the Perfect Business Plan 1. 2. 3. Stealth Mode’s Declining Popularity.

Toyota Way handout.docx. Lean Goes Better with Coke – the Future of Corporate Innovation. In 2012 I got together with Alexander Osterwalder, Henry Chesbrough and Andre Marquis to think about the Lean and the future of corporate innovation. 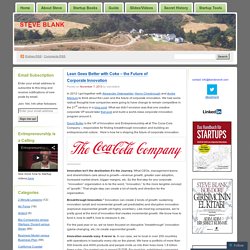 We had some radical thoughts how companies were going to have change to remain competitive in the 21st century in a blog post. What we didn’t envision was that one creative corporate VP would take that post and build a world-class corporate innovation program around it. David Butler is the VP of Innovation and Entrepreneurship of at The Coca-Cola Company – responsible for finding breakthrough innovation and building an entrepreneurial culture. Here’s how he’s shaping the future of corporate innovation. Innovation isn’t the destination it’s the Journey. Breakthrough Innovation.” For the past year or so, we’ve been focused on disruptive “breakthrough” innovation (game-changing, etc.) to create exponential growth.

Innovation sounds easy. There are co-working spaces in basically every city in the world—from Nepal to New York. Lessons Learned. The Future of Corporate Innovation and Entrepreneurship. Almost every large company understands it needs to build an organization that deals with the ever-increasing external forces of continuous disruption, the need for continuous innovation, globalization and regulation. 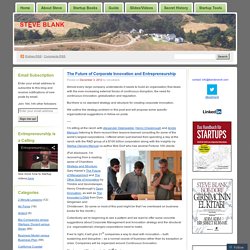 But there is no standard strategy and structure for creating corporate innovation. We outline the strategy problem in this post and will propose some specific organizational suggestions in follow-on posts. I’m sitting at the ranch with Alexander Osterwalder, Henry Chesbrough and Andre Marquis listening to them recount their lessons-learned consulting for some of the world’s largest corporations. I offered what I just learned from spending a day at the ranch with the R&D group of a $100 billion corporation along with the insights my Startup Owners Manual co-author Bob Dorf who has several Fortune 100 clients. (Full disclosure.

Strategy and Structure in the 21st CenturyWhile companies have existed for the last 400 years, their modern form is less than 150 years old.