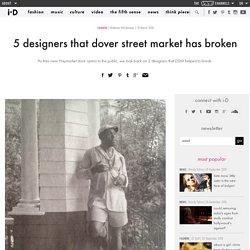 Andre WalkerBrooklyn-based Andre Walker had, of course, been designing clothes long before DSM was a twinkle in Rei Kawakubo and Adrian Joffe's eyes (he'd been serving as a consultant for Marc Jacobs, Louis Vuitton and Kim Jones for years). But it was at there, at the opening of the New York store in 2014, that his designs first stood pride of place in an Actual Living Breathing Store after years of financial uncertainty. How Comme des Garçons Grew Gosha Rubchinskiy.

LONDON, United Kingdom — Gosha Rubchinskiy is standing in front of a photographic backdrop of Moscow high-rises, which demarcates the space the designer’s post-Soviet, skater-inflected fashion label will soon inhabit in the basement of Comme des Garçons’ Dover Street Market in London. 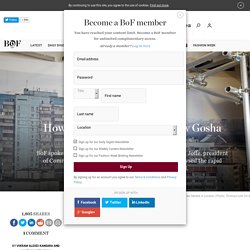 The retailer is set to reopen this Saturday in the 31,000-square-foot former Burberry headquarters on Haymarket, just south of Picadilly Circus, following a major rent hike at the store’s original Mayfair location. That Rubchinskiy’s new space, at about 270 square feet, is significantly larger than the space he occupied at the old Dover Street Market, is a testament to the success of the label. Dover Street Market's Page. LONDON, United Kingdom — Owned by Comme des Garçons and known for its daring edit, creative visual merchandising and bi-annual “tachiagari” whereby the interior of the store is completely reborn, Dover Street Market is a multi-brand retail experience rooted in ‘beautiful chaos’ that offers some of the world’s most avant-garde menswear. 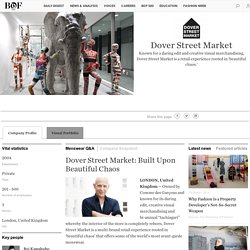 Since breaking new ground in 2004 in London’s Dover Street, then a retail backwater far from the established luxury shopping corridor of nearby Bond Street, Dover Street Market has added additional locations in Tokyo, Beijing (in partnership with I.T) and New York. Each season, the stores invite select designers to create unique art installation-like spaces and pop-ups to house their offering and carry many of fashion’s leading names, alongside Comme des Garçons’ own menswear lines. New York Fashion Week Adapts to Changing Designer Needs, Business Models.

NEW YORK, United States — New looks on the runway at New York Fashion Week will be met with changes behind the scenes as designers tweak their shows and schedules to meet the needs and expectations of digitally engaged consumers. 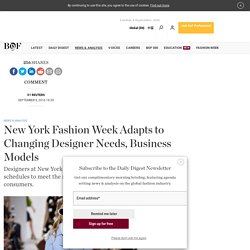 About 100 designers will showcase their collections at the fashion fest that begins on Thursday. The looks are expected to hark back to the 1980s and feature shirtdresses, well-defined, generous cuts, ruffles and clothes that transcend the seasons. "I think we are going to see a lot more seasonless merchandise; in other words it is going to be more about layering," said Lizzy Bowring, head of the catwalks department at trend forecasting and analysis company WGSN.

Another theme will be athletic-inspired fashion and street-style looks, popularised by singers Kanye West, Beyonce and Rihanna, whose Fenty Puma collection will be available in pop-up shops and stores this week. H&M Announces Designer Collaboration with Kenzo. STOCKHOLM, Sweden — Sweden's Hennes & Mauritz said on Wednesday its next designer collaboration would be with French upmarket fashion house Kenzo, which would create women's and men's collections as well as accessories for the budget apparel giant. 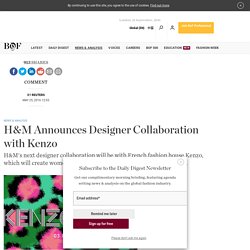 H&M, the world's second-biggest fashion retailer after Zara owner Inditex said in a statement it would launch Kenzo's H&M collections in around 250 stores worldwide and online in November. Kenzo's apparel is known for its vivid colours and prints. H&M has collaborated regularly with upmarket fashion houses and celebrities for more than a decade as a part of its marketing strategy, with partners ranging from designers Karl Lagerfeld to Alexander Wang to football star David Beckham.