Yo como docente. 2 easy science experiments [pt 7] How to Make a Formal Presentation. How to Improve Your Listening Skills in a New Language. 10 Things About Me. Think Twice before shopping from Shopclues/ my opinion about Online shopping /By Tech Addicted. 20 Common English Grammar Mistakes Not to Pass on to Your Students - Oxford Seminars Blog. It’s easy to use regional dialects or commonly misused language mistakes when speaking everyday English. 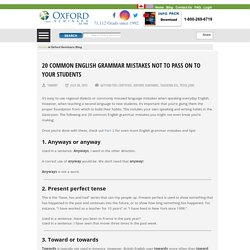 However, when teaching a second language to new students, it’s important that you’re giving them the proper foundation from which to build their habits. This includes your own speaking and writing habits in the classroom. The following are 20 common English grammar mistakes you might not even know you’re making: Once you’re done with these, check out Part 2 for even more English grammar mistakes and tips! 1. Used in a sentence: Anyways, I went in the other direction. A correct use of anyway would be: We don’t need that anyway! Anyways is not a word. 2. This is the “have, has and had” series that can trip people up. Used in a sentence: Have you been to France in the past year? Used in a sentence: I have seen that movie three times in the past week. 3. Towards is typically not used in America. 4. Take, for instance, this sentence: He must stay with her! 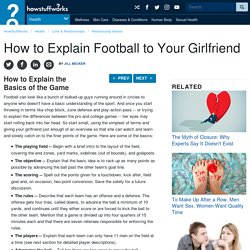 And once you start throwing in terms like chop block, zone defense and play-action pass -- or trying to explain the differences between the pro and college games -- her eyes may start rolling back into her head. So start small, using the simplest of terms and giving your girlfriend just enough of an overview so that she can watch and learn and slowly catch on to the finer points of the game. Here are some of the basics: The playing field -- Begin with a brief intro to the layout of the field, covering the end zones, yard marks, sidelines (out of bounds), and goalposts.The objective -- Explain that the basic idea is to rack up as many points as possible by advancing the ball past the other team's goal line.The scoring -- Spell out the points given for a touchdown, kick after, field goal and, on occasion, two-point conversion.

Basic Argument Construction. Everyone has made an argument before. 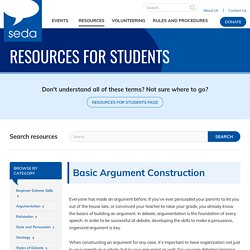 If you’ve ever persuaded your parents to let you out of the house late, or convinced your teacher to raise your grade, you already know the basics of building an argument. In debate, argumentation is the foundation of every speech. In order to be successful at debate, developing the skills to make a persuasive, organized argument is key. When constructing an argument for any case, it’s important to have organization not just in your speech as a whole, but in your argument as well. For younger debaters learning the basics of argumentation, we use an acronym to remember the structure of each argument. Label. List of Synonyms. A list of common synonyms grouped in categories: for teachers, writers and students of English alike. 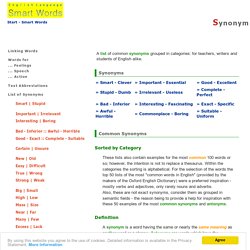 Synonyms Common Synonyms Sorted by Category These lists also contain examples for the most common 100 words or so; however, the intention is not to replace a thesaurus. 9 International Holidays You Must Experience in Your Lifetime. Category: Bucket List Worthy By Steph Spencer | October 29, 2012 To visitors from foreign lands holidays such as Thanksgiving and Halloween are an intriguing novelty. 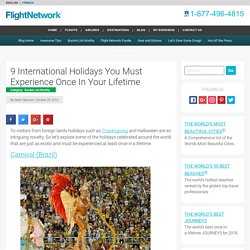 So let’s explore some of the holidays celebrated around the world that are just as exotic and must be experienced at least once in a lifetime. Carnival (Brazil) Partying for six days straight is going to require some training, but who wouldn’t want to experience one of the world’s most famous celebrations? The power of music: how it can benefit health. Free ESL Regular Daily English Lesson - Small Talk - Two Example Dialogs. Listen to the Entire Lesson In this conversation, we initiated the conversation and talked about the other person. 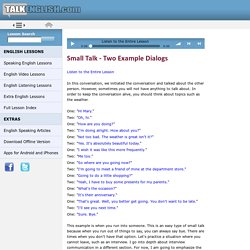 Patrick Mahomes and Erin Andrews Super Bowl LIV. Finding the Main Idea When Reading: Columbia College. The main idea of a paragraph is the author's message about the topic. 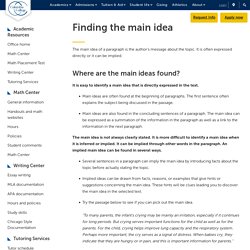 It is often expressed directly or it can be implied. Where are the main ideas found? It is easy to identify a main idea that is directly expressed in the text. Main ideas are often found at the beginning of paragraphs. Australian Research Council's (ARC) Centre of Excellence for Climate System Science. Forget everything you were taught about writing essays and scientific papers, here are a few tips on how to write an opinion piece (or op-ed, as journalists say) that people will actually want to read and talk about.