Trillions of Retail Dollars Lost to Shadow Economy. M&S to slow international expansion. Marks & Spencer is to slow down its overseas expansion amid concerns in the Chinese and Russian economies, the company told Reuters. 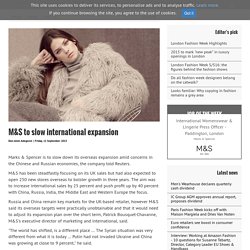 M&S has been steadfastly focusing on its UK sales but had also expected to open 250 new stores overseas to bolster growth in three years. The aim was to increase international sales by 25 percent and push profit up by 40 percent with China, Russia, India, the Middle East and Western Europe the focus. Russia and China remain key markets for the UK-based retailer, however M&S said its overseas targets were practically unobtainable and that it would need to adjust its expansion plan over the short term, Patrick Bousquet-Chavanne, M&S's executive director of marketing and international, said. "The world has shifted, is a different place ... The Syrian situation was very different from what it is today ... Hermès reports 20% jump in income despite slowing Chinese economy. The luxury goods maker Hermès has reported a 20% rise in operating income to €748m for the for the first half of 2015, despite its heavy reliance on the slowing economy of China. 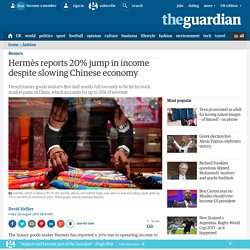 The French group, which has a number of stores in the UK selling its Kelly bags and silk scarves, said on Friday that sales in Japan rose 20% in the period, while in Europe they increased 7%. Earlier this month, Hermès was included by the US bank Citi in a list of 48 large companies with high exposure to the slowing Chinese economy. Citi estimated that between 20-25% of the company’s revenues came from China. Although the latest results fall too early to take into account the latest gyrations in China’s stock market, they incorporate a period during which the country’s economy has been slowing down.

Hermès says sales in Asia excluding Japan grew by 7% in the first half of the year, “despite the difficult context in Hong Kong and Macau”. Bargain hunters prop up retail sales in August. Britain’s high street stores kept up their record of monthly sales increases in August as shoppers were lured by heavy price discounting, according to official figures. 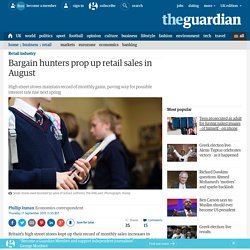 The sales rise stretches back to June 2014 and is likely to be leapt on by hawks on the Bank of England’s monetary policy committee as a sign of strength in the economy and another reason to raise interest rates as early as next spring. But the volume of goods sold in retail outlets managed only a 0.2% increase from July, which one analyst described as “fairly feeble”. Heavy discounting has pushed down retail prices by 3.3% since August 2014 and it is possible to track back the year-long rise in sales to the month prices started to tumble. Although much of the fall in prices can be accounted for by lower petrol prices, bargain-hunting shoppers have also kept prices low in other sectors.

Furniture and household goods have shown the strongest growth in volume sales over that past year while food has stagnated. China's economic problems should be put in perspective, says Osborne. George Osborne has urged Chinese leaders to press on with economic reforms as he played down fears that China’s recent stock market turmoil and economic slowdown will endanger the global economy. 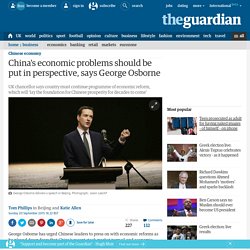 Last month’s stock market meltdown and disappointing economic data from China have fuelled concerns that the world’s second largest economy is slowing faster than its government is letting on. However, speaking on Sunday the chancellor insisted that even with its economy slowing, China would continue to be “a massive source of growth going forward”. “China is undergoing a very important economic transformation - a transformation that its government wants to see [and] that its people want to see - from that investment-led economy of the past to a consumption-led economy of the future.

And of course when that happens you are going to find that challenging. It is a big change,” Osborne said. “But put it in perspective. “Of course there have been ups and downs. The Global Economy on a Sustainable Thread  This blog is part of a month-long focus around sustainable fashion across HuffPost UK Style and Lifestyle. 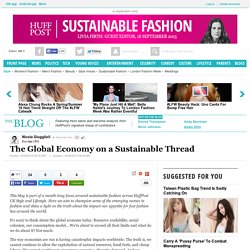 Here we aim to champion some of the emerging names in fashion and shine a light on the truth about the impact our appetite for fast fashion has around the world. It's scary to think about the global economy today. Resource availability, social cohesion, our consumption model... We're about to exceed all their limits and what do we do about it? Not much. The way economies are run is having catastrophic impacts worldwide. Yet - although it's clear to many that the current situation is unsustainable - we're still reticent about developing a coherent strategy to take us forward in a healthy way. We've all been encouraged to believe that the problems we need to solve are not our responsibility. But is that really the case? Here, I believe, is where we should bring into play our most powerful tool and agent. Take Uruguay. This thread is 'sustainability'.