Does ‘Made in’ matter? Introducing Study 34, The Knitwear Brand Using Recycled Materials To Create High-End Sustainable Fashion. Two years ago, Eleanor O'Neill was working as a junior designer at a well-established Italian knitwear brand. 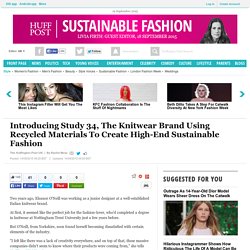 At first, it seemed like the perfect job for the fashion-lover, who'd completed a degree in knitwear at Nottingham Trent University just a few years before. But O'Neill, from Yorkshire, soon found herself becoming dissatisfied with certain elements of the industry. "I felt like there was a lack of creativity everywhere, and on top of that, these massive companies didn't seem to know where their products were coming from," she tells HuffPost UK Lifestyle. "There was also so much waste that I started to get a little bit frustrated.

" O'Neill left her job in 2014 and in March of this year, launched her own sustainable knitwear brand, Study 34. Eleanor O'Neill The aim of Study 34 is simple: to produce exclusive and original knitwear that is sustainably sourced and ethically made. O'Neill, 26, makes all the jumpers herself in her Newcastle studio, using a small selection of machinery.

Close. Plastic bag use down 71% since 5p charge was introduced - BBC News. Image copyright Getty Images The number of single-use carrier bags handed out by shops in Wales has fallen by 71% since charges were introduced in 2011, according to a report. 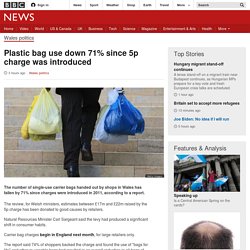 The review, for Welsh ministers, estimates between £17m and £22m raised by the 5p charge has been donated to good causes by retailers. Natural Resources Minister Carl Sargeant said the levy had produced a significant shift in consumer habits. Carrier bag charges begin in England next month, for large retailers only. The report said 74% of shoppers backed the charge and found the use of "bags for life" and other re-useable bags had resulted in an overall reduction in all bags of 57%. Mr Sargeant said: "We wanted the people of Wales to get into the habit of reusing their bags when shopping. Wales was the first UK nation to introduce the bag charges, followed by Northern Ireland and then Scotland. Wearable pineapple fibres could prove sustainable alternative to leather. At weddings and formal events in the Philippines, men can often be seen wearing the Barong Tagalog, a thin and transparent embroidered garment worn over a shirt. 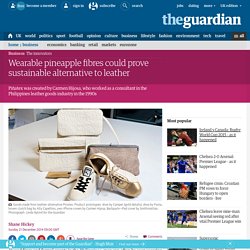 One of the more surprising materials used in its manufacture are fibres from pineapple leaves – and long strands of the leaves could soon also be used to make a host of other products, from trainers and clothes to bags and car upholstery. Called Piñatex - piña is Spanish for pineapple - the new material was created by Carmen Hijosa, who worked as a consultant in the Philippines leather goods industry in the 1990s. She was unimpressed with the standard of goods produced and started to look for alternatives.

It was the strength and the fineness of the pineapple leaf fibres used in the Barong Tagalog that first alerted her that there was another option: “I was looking for an alternative to leather. That was the beginning of my thinking. “We can make shoes, we can make bags. “We are completely new. Fast Fashion's Green Initiatives? Don't Believe the Hype — The Fashion Law. H&M has is launching a new effort to promote recycling as it seeks to cut its environmental impact, boost its ethical credentials and address looming shortages of raw materials. 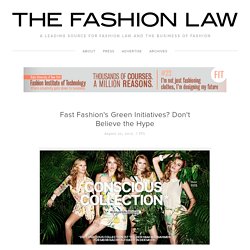 The move by the Swedish fast fashion giant, which is the world's second-biggest fashion retailer, sounds pretty good. According to Reuters, the brand’s new initiative comes as critics point out the damage being caused by a throwaway culture fuelled by cheap clothing that has seen a sharp rise in the number of garments sold annually around the world. But before we get ahead of ourselves, we have seen this before, and its called “greenwashing.” As you likely know by now (or at least I hope you do), fast fashion is a dirty industry – second only to the oil industry, according to recent reports. In order to keep costs low, fast fashion suppliers and even the retailers themselves operate in ethically questionable ways. Some recent examples, aside from H&M’s latest recycling stint? Don’t get me wrong. H&M is Reportedly Focusing on its "Ethical Profile" — The Fashion Law.

Courtesy of Reuters Swedish fashion company Hennes & Mauritz is reportedly focusing on its ethical profile to drive long-term sales growth as shoppers become more interested in how clothes are produced as well as their environmental impact, its new sustainability chief said. 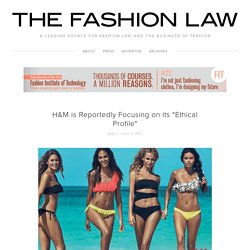 The fashion industry has come under increasing pressure to cut water use and pesticides in cotton farming, reduce pollution from textile factories and improve factory conditions, particularly after the collapse of the Rana Plaza complex in Bangladesh two years ago. Opinion is split on whether companies are doing enough. While worker rights group Clean Clothes Campaign has accused H&M of using the sustainability issue as a marketing ploy, Corporate Knights magazine declared it to be among the world's most sustainable companies. Anna Gedda, H&M's head of sustainability, is determined the latter view will prevail. Others are less skeptical.