Limits on the Media

A reminder that your Instagram photos aren’t really yours: Someone else can sell them for $90,000. Richard Prince’s Instagram screenshots at Frieze Art Fair in New York. 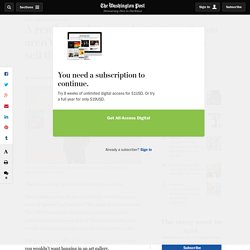 Elonis v. United States and the Nuances of Threats on Facebook. On Monday morning, Supreme Court Chief Justice John Roberts got some attention for quoting Eminem during oral arguments in a case, Elonis v. 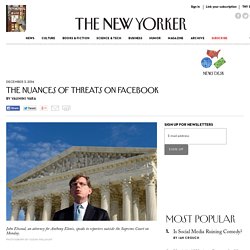 United States, about the limits of free speech. The issue Roberts wanted to understand—when does communication cross the line into being an illegal threat? —is central to the case, which involves an aspiring rapper who used violent language on Facebook in reference to his wife, an elementary school, and an F.B.I. agent, among others. Edward Snowden's not the story. The fate of the internet is. Repeat after me: Edward Snowden is not the story. 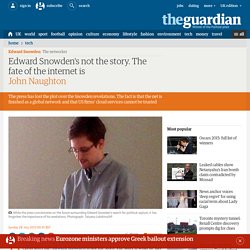 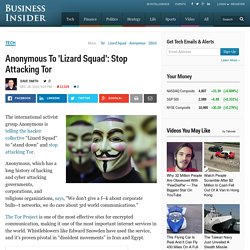 Anonymous, which has a long history of hacking and cyber attacking governments, corporations, and religions organizations, says, "We don't give a f--k about corporate bulls--t networks, we do care about 3rd world communications. " Save the Fav, Twitter's Digital Body Language. Photo There’s a kerfuffle at the moment on Twitter about what should happen when you fav something. 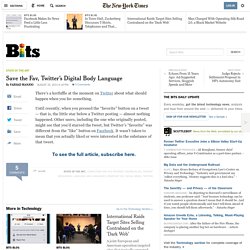 Until recently, when you pressed the “favorite” button on a tweet — that is, the little star below a Twitter posting — almost nothing happened. Other users, including the one who originally posted, might see that you’d starred the tweet, but Twitter’s “favorite” was different from the “like” button on Facebook. It wasn’t taken to mean that you actually liked or were interested in the substance of that tweet. This made the fav one of the few forms of online speech that were mostly disconnected from consequence. But now Twitter is slightly altering what happens when you press “favorite.” The Soul of the Censor by Robert Darnton. What is censorship? 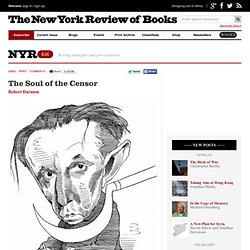 If the concept of censorship is extended to everything, it means nothing. It should not be trivialized. Detention of journalists in Iran a bellwether of internal politics. With all of the headline-making turmoil in the Middle East, it’s understandable that the detention of three journalists in Iran has received relatively little attention. 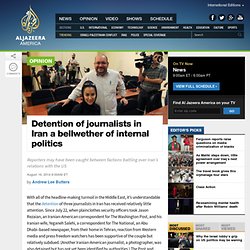 Since July 22, when plainclothes security officers took Jason Rezaian, an Iranian-American correspondent for The Washington Post, and his Iranian wife, Yeganeh Salehi, a correspondent for The National, an Abu Dhabi–based newspaper, from their home in Tehran, reaction from Western media and press freedom watchers has been supportive of the couple but relatively subdued. (Another Iranian-American journalist, a photographer, was also detained but has not yet been identified by authorities.) Russian Government Reportedly Edited Wikipedia Entry About MH17. An Internet user within the Russian government reportedly revised a Wikipedia entry about Malaysia Airlines Flight 17, which was shot down over eastern Ukraine Thursday. 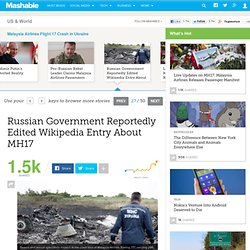 The changes were spotted by a Twitter bot that monitors Wikipedia edits from Russian government IP addresses. The anonymous user revised one sentence in a Russian-language page that lists "aircraft accidents in civil aviation," according to a Google translation of the tweet by @RuGovEdits. The original entry said: New Media Sites in Iran Blur Lines Between Citizen Journo, Professional Journo, & Activist. A screenshot of the amateur video capturing Neda Agha-Soltan's death. 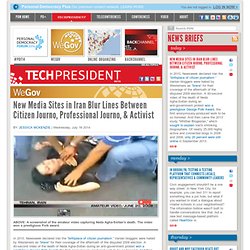 The Password Is Finally Dying. Here's Mine - WSJ. Virality: How Does It Work and Why Do We Share?

No Warrant, No Problem: How the Government Can Still Get Your Digital Data. Update, Jan. 8, 2014: This post has been updated. 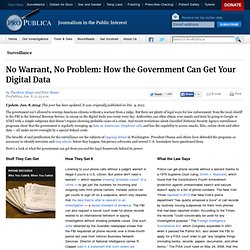 It was originally published on Dec. 4, 2012. The government isn't allowed to wiretap American citizens without a warrant from a judge. But there are plenty of legal ways for law enforcement, from the local sheriff to the FBI to the Internal Revenue Service, to snoop on the digital trails you create every day. Authorities can often obtain your emails and texts by going to Google or AT&T with a simple subpoena that doesn’t require showing probable cause of a crime. And recent revelations about classified National Security Agency surveillance programs show that the government is regularly sweeping up data on Americans’ telephone calls and has the capability to access emails, files, online chats and other data — all under secret oversight by a special federal court.

United States of Secrets. How AT&T Helped the NSA Spy on Millions August 17, 2015, 4:23 pm ET · by Jason M. FCC Advances Proposal to Erode Net Neutrality. Highlights: 3 things you need to know now The FCC voted 3-2 to take the next step toward adopting a new proposal on net neutrality. A public comment period is now open.We haven't seen the full proposal yet, but its primary option would allow companies to strike deals that would prioritize some Internet traffic over others, with FCC scrutiny.The process isn't over — after the public comment period, the FCC will write a final set of rules and vote on them. WASHINGTON — The Federal Communications Commission voted 3-2 on Thursday to push forward its much-anticipated proposal that will dictate how broadband providers can treat Internet traffic, a crucial piece of regulation that has drawn the attention of the world's largest Internet companies and a wide range of politicians including President Barack Obama.

The proposal includes two primary options. A Gossip App Brought My High School to a Halt. M., a high school junior, was rushing to class last Thursday morning when a friend stopped to ask if she was okay. Taken by surprise, she laughed and answered that she was fine. Continuing down the hall, she was met by strange glances and similar inquiries. She was at a loss. What had she done to become a celebrity overnight? It wasn’t until she sat down for her first period class that someone finally told her about Yik Yak. The Role of Social Media in the Arab Uprisings. Almost immediately after the Arab uprisings began, there was debate over the role and influence of social media in the ouster of Tunisian president Zine El Abidine Ben Ali and the imminent overthrow of Mubarak.

In covering what some deemed the Facebook or Twitter revolutions, the media focused heavily on young protesters mobilizing in the streets in political opposition, smartphones in hand. And since then, the violent and sectarian unrest in Syria has brought increased attention to the role of citizen journalism.[1] Social media indeed played a part in the Arab uprisings. Networks formed online were crucial in organizing a core group of activists, specifically in Egypt.[2] Civil society leaders in Arab countries emphasized the role of "the internet, mobile phones, and social media" in the protests.[3] Additionally, digital media has been used by Arabs to exercise freedom of speech and as a space for civic engagement.[4]

In a Queens School, an Early Start on Preparing ‘Responsible Digital Citizens’ Photo. The Internet's Telltale Heartbleed. Why is American internet so slow. Where digital secrets go to die. What Happens To A YouTube Video After You Re-Upload It 1,000 Times. A Fifth-Grade Teacher Wanted To Show Her Students What Happens When You Put Your Photo Online. Pharrell, Happy video: 24 hours of happy first 24-hour music video. Stream and watch. (VIDEO) Pharrell Williams - Happy. American writers are self-censoring, PEN survey finds. PEN America, a nonprofit that works to advance freedom of expression and speech in literature, has released a disturbing survey that finds American writers are not just increasingly worried about government surveillance as a result of the NSA — but also engaging in self-censorship.

Internet freedom in countries around the world has declined sharply in the past year despite a pushback from activists that successfully blocked some governments’ repressive laws, according to a new report.

Privacy Scandal: NSA Can Spy on Smart Phone Data. Revealed: How US and UK spy agencies defeat internet privacy and security. Steve Coll: Obama, Holder, Journalists, and Their Sources. How La Nación is using data to challenge a FOIA-free culture. Meet The Dread Pirate Roberts, The Man Behind Booming Black Market Drug Website Silk Road. Tom Wheeler and the Coming War Over Net Neutrality. How Not to Be Alone. U.S. disrupts al-Qaeda’s online magazine. America on NSA Spy Programs: Meh. White House Defends Phone-Record Tracking as 'Critical Tool' Who should control the media? I’m still here: back online after a year without the internet.

Are electronic media making us less (or more) literate? Why 2011 Will Be Defined by Social Media Democracy. Lawsuit May Determine Who Owns a Twitter Account. The Saturday Profile - Blogger Aleksei Navalny Rouses Russia.