Transgender Swimmer Given Choice Of Harvard's Men's, Women's Teams. Schuyler Bailar will swim on the men's team at Harvard this fall. 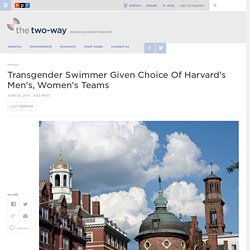 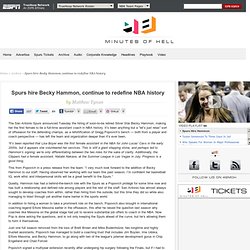 It’s been anything but a “let’s just relax” sort of offseason for the defending champs, as a refortification of Gregg Popovich’s bench — both from a player and coach perspective — has left the team and organization deeper than it’s ever been. ¹It’s been reported that Lisa Boyer was the first female assistant in the NBA for John Lucas’ Cavs in the early 2000s, but it appears she volunteered her services. This is still a giant stepping stone, and perhaps led to Hammon’s signing; we’re only differentiating between the two roles for the sake of clarity. Additionally, the Clippers had a female assistant, Natalie Nakase, at the Summer League in Las Vegas in July. WNBA star Becky Hammon becomes second female to coach in the NBA. Spurs assistant coach Becky Hammon San Antonio PG Becky Hammon continues to break barriers. 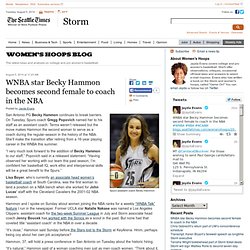 Clippers’ Nakase Aspires to Be N.B.A.’s First Female Head Coach. Photo LAS VEGAS — Professional athletes will frequently do almost anything if they believe it will help them improve. 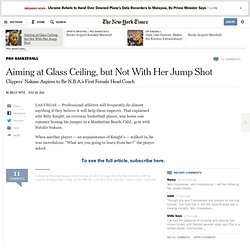 WNBA embraces LGBT fans. The WNBA is launching a campaign to market specifically to the LGBT community, a move that makes it the first pro league to specifically recruit gay, lesbian, bisexual and transgendered fans to its games. 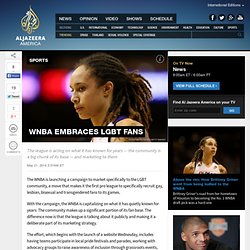 With the campaign, the WNBA is capitalizing on what it has quietly known for years: The community makes up a significant portion of its fan base. The difference now is that the league is talking about it publicly and making it a deliberate part of its marketing strategy. The effort, which begins with the launch of a website Wednesday, includes having teams participate in local pride festivals and parades, working with advocacy groups to raise awareness of inclusion through grassroots events, and advertising with lesbian media. A nationally televised Pride game will take place between Tulsa and Chicago on Sunday, June 22. ‘Why not me?’ UMass' Derrick Gordon becomes first openly gay Division I men’s college basketball player. 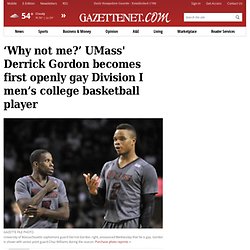 By Kate Fagan | Apr 9, 2014espnW.com Derrick Gordon sat waiting outside the film room, his knee bouncing furiously up and down. 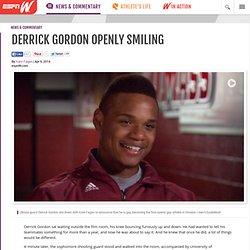 He had wanted to tell his teammates something for more than a year, and now he was about to say it. And he knew that once he did, a lot of things would be different. A minute later, the sophomore shooting guard stood and walked into the room, accompanied by University of Massachusetts men's basketball coach Derek Kellogg. Coming Out to Play: The Role of Sexuality in Sport on Livestream. Derrick Gordon, UMass basketball player, becomes first openly gay NCAA Division I player. Kate Fagan explains why covering openly gay athletes is news. I Was An NFL Player Until I Was Fired By Two Cowards And A Bigot. The Inside Story of How the NFL's Plan for Its 1st Openly Gay Player Fell Apart. The team had decided yes. 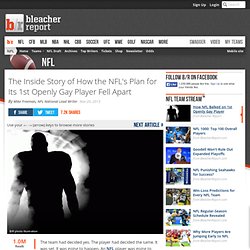 The player had decided the same. It was set. It was going to happen. An NFL player was going to publicly say he was gay and then play in the NFL. What happened before that moment showed how parts of the NFL are progressive and ready for change. The following account is based on interviews with approximately a dozen people, including team and league officials, current and former players, and gay-rights advocates. It was early this past spring when a closeted gay player, who was a free agent, reached out to a small group of friends and told them about his sexual orientation. Martin’s bully scandal shocks ex-coaches, school mates. Walking down the halls of Los Angeles’ most privileged high schools, you are taught at an early age the best way to settle a score is through reason — not starting a brawl or throwing a punch. 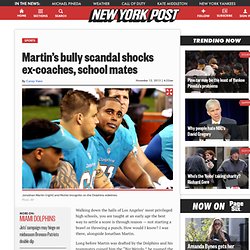 How would I know? I was there, alongside Jonathan Martin. Long before Martin was drafted by the Dolphins and his teammates coined him the “Big Weirdo,” he roamed the campus of John Thomas Dye, a private elementary school located in the hills of Bel-Air, and was known as “Moose.” Owning The Middle. Robbie Rogers to join Los Angeles Galaxy, report says. Denver Nuggets' Kenneth Faried makes his mothers proud. Margaret Talbot: A Warm Reception for Jason Collins. The most remarkable thing about the N.B.A. player Jason Collins’s coming out last week is the support he immediately received from teammates and other athletes. 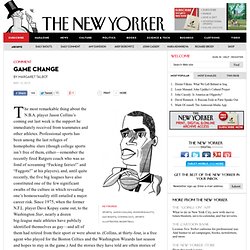 Professional sports has been among the last refuges of homophobic slurs (though college sports isn’t free of them, either—remember the recently fired Rutgers coach who was so fond of screaming “Fucking fairies!” And “Faggots!” At his players), and, until quite recently, the five big leagues have also constituted one of the few significant swaths of the culture in which revealing one’s homosexuality still entailed a major career risk. Since 1975, when the former N.F.L. player Dave Kopay came out, to the Washington Star, nearly a dozen big-league male athletes have publicly identified themselves as gay—and all of them had retired from their sport or were about to.

On Wednesday, Brittney Griner, the No. 1 pick in the WNBA draft and one of the best female basketball players on the planet, came out of the closet, to the world at large anyway. Brittney Griner and the quiet queering of professional sports.