Let's not ignore the other pandemic. Health & science Might we be ignoring the other pandemic – slower-moving and less visible than COVID-19 - that afflicts NZ, asks Niki Bezzant Twenty years ago, Professor Jim Mann wrote an editorial in the medical journal The Lancet, entitled: Stemming the Tide of Diabetes. 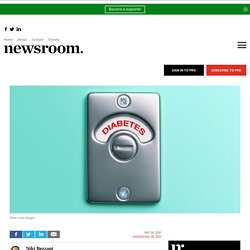 It may have been one of the first times diabetes had been described as an epidemic, something for which Mann says the editorial attracted attention, as well as criticism. At that time it was acknowledged that a number of indigenous populations around the world had especially high rates of diabetes. A quickfire A to Z of diabetes. It is estimated 15,000 people in the Southern district have diabetes but a large number of people remain undiagnosed. 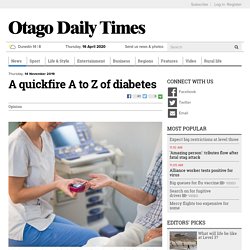 To mark World Diabetes Day today, WellSouth’s Helen Gibbs gives an alphabetical overview of what you need to know about diabetes and what you can do about it. A is for activity. Being active reduces your risk of developing diabetes and helps you manage your blood glucose if you have pre-diabetes or diabetes. Activity doesn't need to be exercise; it can be housework, gardening, playing with kids. Starship - 2. What is Type 2 Diabetes. Type 2 Diabetes: Foods to Eat, Foods to Avoid - Family Health Diary. Type 2 diabetes is the most common form of diabetes, affecting around 90% of New Zealand diabetes sufferers. 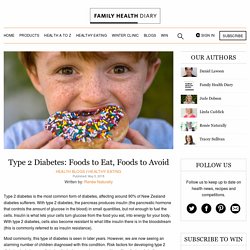 With type 2 diabetes, the pancreas produces insulin (the pancreatic hormone that controls the amount of glucose in the blood) in small quantities, but not enough to fuel the cells. Insulin is what lets your cells turn glucose from the food you eat, into energy for your body. With type 2 diabetes, cells also become resistant to what little insulin there is in the bloodstream (this is commonly referred to as insulin resistance). Most commonly, this type of diabetes is seen in later years. However, we are now seeing an alarming number of children diagnosed with this condition. Before making any major changes to your diet, please speak to your doctor about what is right for your situation.

Foods to Eat Aim for foods with a low glycemic load. Foods to Avoid Do not come off or change any diabetic medicine without first consulting with your doctor. Surprising new research on treating type 2 diabetes. In the “real world”, says Poppitt, Chinese people have a greater risk of developing type 2 diabetes than Europeans with the same BMI. 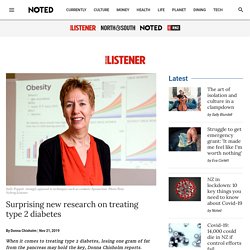 “If you are Chinese or Indian, the best recommendation is to stay as lean as you can for as long as you can, because for you, things start to go wrong metabolically earlier, and when you are younger and slimmer.” They’ve measured metabolites in the blood – the chemical compounds produced by the body’s metabolism – and compared the markers between the two groups and found them “completely different”. What causes that difference is still not clear, and the Auckland team plans next year to investigate the contribution of diet. Poppitt says ectopic fat infiltrating the organs could be more important as a contributor to type 2 diabetes than visceral fat, but it’s not yet clear whether people who had high levels of visceral fat without fat in their organs are still at increased risk. 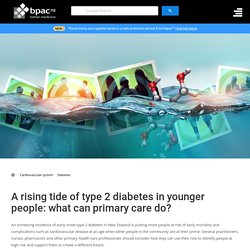 For information on type 2 diabetes in general, see: “Managing patients with type 2 diabetes: from lifestyle to insulin” www.bpac.org.nz/bpj/2015/december/diabetes.aspx New Zealand has a diabetes problem, fuelled in part by one of the highest rates of obesity in the world.1 Approximately 6% of the total population has diabetes. Health Navigator NZ. Diabetes is a condition where the level of glucose (a type of sugar) in your blood is too high. 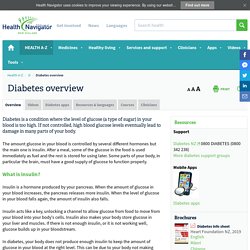 If not controlled, high blood glucose levels eventually lead to damage in many parts of your body. The amount glucose in your blood is controlled by several different hormones but the main one is insulin. After a meal, some of the glucose in the food is used immediately as fuel and the rest is stored for using later. Some parts of your body, in particular the brain, must have a good supply of glucose to function properly.

What is insulin? Diabetes New Zealand. Type 2 diabetes is the most common form of diabetes. 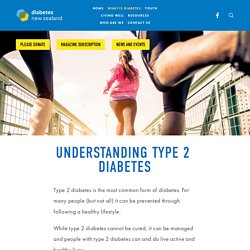 For many people (but not all) it can be prevented through following a healthy lifestyle. While type 2 diabetes cannot be cured, it can be managed and people with type 2 diabetes can and do live active and healthy lives. What is type 2 diabetes? Diabetes is the result of the body not creating enough insulin to keep blood glucose (sugar) levels in the normal range. Everyone needs some glucose in their blood, but if it’s too high it can damage your body over time. In type 2 diabetes, either the body doesn’t produce enough insulin, or the cells in the body don’t recognise the insulin that is present. Diabetes sucks. The emotional rollercoaster of diagnosis. 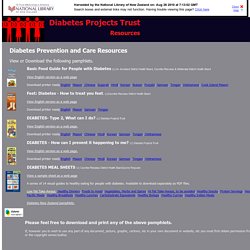 (c)Counties Manukau District Health Board View English version as a web page Download printer ready English; Maaori; Samoan; Tongan. Type 2 Diabetes: The silent killer which targets the poor. Today, more than a quarter of a million people in New Zealand are known to have Type 2 diabetes, and that number is growing by the year, as shown in The Disease That Is Killing My Family, a five-part documentary from the Attitude series. 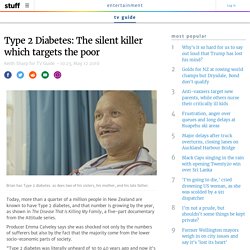 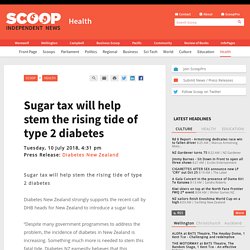 “Despite many government programmes to address the problem, the incidence of diabetes in New Zealand is increasing. Something much more is needed to stem this fatal tide. Diabetes NZ earnestly believes that this something is a sugar tax,” says Sir Eion Edgar, patron of Diabetes NZ. Diabetes NZ has lodged a substantial submission to the Tax Working Group – Sugar Tax focussed on how a sugar tax can help save lives, improve quality of life, and save millions on our national health costs. Heather Verry, Chief Executive of Diabetes NZ, says, “The growing and appalling rates of type 2 diabetes in this country presents a compelling case that stronger action is now imperative.”

Diabetes significantly contributes to heart attacks and strokes, kidney failure, blindness, nerve damage, amputations, and dental caries. © Scoop Media. A rising tide of type 2 diabetes in younger people: what can primary care do? - bpac nz. Diabetes: New Zealand’s greatest epidemic. Health & science A crisis summit has called for an overhaul of how diabetes is managed after 25 years of South Auckland data shows there’s been no improvement When Professor David Simmons started working in Middlemore in 1989, he saw an epidemic unfolding.

“People were walking in with end stage renal failure and undiagnosed diabetes. I thought this is incredible. How is this happening?” It was clear to the diabetes expert something was amiss in either people seeing a GP, getting a diagnosis, or in the management of the condition. Uncontrolled diabetes can lead to heart disease, kidney failure, strokes and blindness. Gangrene, which requires amputations is another common issue. Simmons decided to look into what was going on before people got to the point of turning up at hospital. Originally from the from the UK, Simmons had experience in the different rates of diabetes between ethnic groups, so auditing tracked ethnicity. The sugar debate and nutrition: obesity and ‘empty calories’ - New Zealand Medical Journal. Auckland study about impact of breakfast on type 2 diabetes in need of volunteers.

Last updated 13:06, May 2 2017. Type 2 Diabetes - Food & Nutrition — DIABETES NEW ZEALAND. Making healthy food choices and staying physically active are the cornerstone of managing Type 2 diabetes (along with staying physically active).The guidelines for eating well for those of us with Type 2 diabetes are the same as the healthy eating guidelines recommended for everybody.There are many tasty and inviting healthy foods and dishes available. Knowing how to identify these foods is an important skill.Our relationship to food is complex. It involves feelings, upbringing, and habits.

Because of this, changing our eating habits can be a big challenge. But there are lots of strategies that can help.All of us have unique nutritional needs. The amount and type of foods we need depend on our age, our gender, our metabolic rate, our level of activity, and our existing body weight. With the hectic pace of modern life many of us are eating out, or eating pre-prepared food, often. Type 2 diabetes slowly rising in Auckland kids. Type 2 diabetes slowly rising in Auckland kids – Pacific and Māori have highest ratesNew research shows increasing numbers of children and teens under 15 in Auckland are developing type 2 diabetes, and that rates among Pacific and Māori children are up to 18 times higher than for European children.The findings are based on 21 years of patient records from Starship Paediatric Diabetes Service.

Says study lead Dr Craig Jefferies: “People still don’t think kids get diabetes, let alone type 2 diabetes.” Type 2 diabetes is linked to lifestyle factors and more usually develops in adulthood. Until recently it was extremely rare to see a child or teenager with type 2 diabetes – the first childhood cases were identified in New Zealand only in the 1990s, he says. Dr Jefferies is a paediatric endocrinologist at Starship Child Health and Liggins Institute researcher. “Some families are shocked by the diagnosis – they don’t see diabetes as a childhood disease. . © Scoop Media. Obesity and diabetes in New Zealand - New Zealand Parliament. Obesity and diabetes in New Zealand It is estimated that 1.1 million adults are obese in New Zealand (that is, they have a BMI or Body Mass Index of 30 or more). Obesity in New Zealand places a considerable strain on the health care system: a study in 2006 estimated that health care costs attributable to overweight and obese persons was $686 million or 4.5% of New Zealand’s total health care expenditure.