‘I wrote The Pōrangi Boy for kids like me’: Shilo Kino on her debut novel. The Marae TV journalist tells the origin story of her debut novel, a young adult book releasing this week. 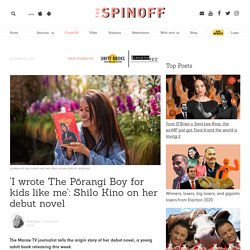 Patricia Grace wrote a story called “It used to be green once” and every year my Pākehā teacher would pull it out in English class and everyone would laugh at the poor Mowri family with 10 kids who ate holey fruit and had a shameful mum who drove a green bomb. I come from a family of four kids and I didn’t even know what holey fruit was. Also, my mum drove a silver Mitsubishi with a TV installed at the front. But still, I was one of the only Māori in the class and so the other kids gave me looks as we read the same narrative year after year. The problem is not the story itself, because Patricia Grace is literally a queen, the problem is that it was one of the only Māori stories being told at that time. The single story creates stereotypes. . – Chimamanda Ngozi Adichie. Name changing a game changer for migrants' job prospects, study finds. Indian migrant Faiaaz Contractor, 42, went from being a petrol pump attendant to financial business development manager - and he believes it is all because he changed his name to Frank. 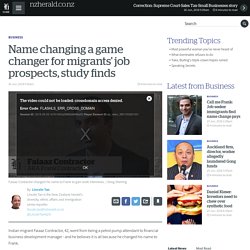 An AUT University study by Professor of Diversity Edwina Pio found migrants are changing names to sound more Kiwi to increase their chances of finding employment. What's in a name: Why I do not use my Chinese name. First Person - I don't have the best memories of learning Chinese as a kid. 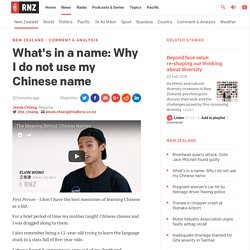 For a brief period of time my mother taught Chinese classes and I was dragged along to them. I also remember being a 12-year-old trying to learn the language stuck in a class full of five-year-olds. I always found it unnecessary, very out of my depth and embarrassed that I knew so little - it was much easier to just leave it altogether. The only time I used Chinese was to talk to my parents and as far as I knew, it wasn't needed. My mother always told me, "Your parents are Taiwanese. I Tried to Fight Racism by Being a "Model Minority" — and Then It Backfired. In this op-ed, author, activist, and mechanical engineer Yassmin Abdel-Magied unpacks the myth of the "model minority" through her own experiences. 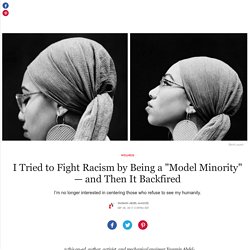 I grew up believing if I became the “model minority” — a hard-working, high-achieving, law-abiding brown Muslim woman — that I could make lasting positive change for myself and others. I thought if I were good enough, my example would make people see that their assumptions about Muslims and people of color were wrong. Once they got to know me, they would change their behavior and fix their biases, I thought. Unfortunately, the events of the past few months have taught me otherwise. I may have been achieving things for myself and changing a couple of minds along the way, but I wasn’t changing the system. NZ's long history of anti-Asian racism. Cass Mason Cass Mason is a Newsroom homepage editor and staff writer. 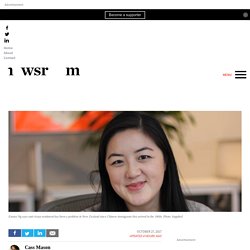 Show more Emma Ng wants to re-tell the story of anti-Asian racism in New Zealand. Not just because so few understand the long history of discrimination and scapegoating they have faced here, but because, as she writes “as long as we are allowed to forget, we will find ourselves returning to fight the the same battles”. She doesn’t want it remembered as Chinese history, but New Zealand history. Ng's book Old Asian, New Asian tells the story of Chinese New Zealanders’ struggle to be recognised as natural and equal citizens in a country they call home, but which has treated them with suspicion and unfairness from the beginning. Ng examines what it means to be a second-generation Chinese New Zealander today, and the hurt that stems from the wide belief that Kiwi and Asian identities are mutually exclusive.

She recounts several anecdotes from her own life that show how benign and casual racist attitudes can seem. Identity – Poem by Lemalu Tate Simi. Like Milk (Short Film about a Polynesian girl who tries to fit into a school of mostly European students.) AI robots are sexist and racist, experts warn - NZ Herald. By Henry Bodkin Robotic artificial intelligence platforms that are increasingly replacing human decision makers are inherently racist and sexist, experts have warned.

Programmes designed to "pre-select" candidates for university places or to assess eligibility for insurance cover or bank loans are likely to discriminate against women and non-white applicants, according to recent research. Professor Noel Sharkey, Co-Director of the Foundation for Responsible Robotics, said more women need to be encouraged into the IT industry to redress the automatic bias.

He said the deep learning algorithms which drive AI software are "not transparent", making it difficult to to redress the problem. Currently approximately 9 per cent of the engineering workforce in the UK is female, with women making up only 20 per cent of those taking A Level physics. "We have a problem," Professor Sharkey told Today.