The solution to the stand off at Ihumātao. The land at Ihumātao cannot be settled within the treaty framework - but no one is asking for that, writes Morgan Godfery. 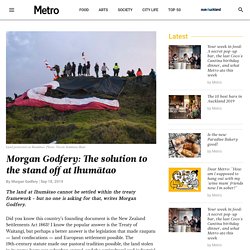 Did you know this country’s founding document is the New Zealand Settlements Act 1863? I know the popular answer is the Treaty of Waitangi, but perhaps a better answer is the legislation that made raupatu — land confiscations — and European settlement possible. Ihumātao: Why the Government needs to act cautiously but quickly. Land occupation at Ihumātao: why the New Zealand government needs to act cautiously but quickly. 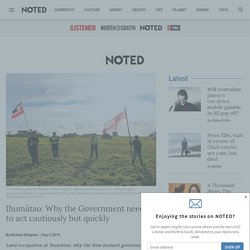 When TJ Perenara took the field for the All Blacks against Australia, in the critical final match of the Bledisloe Cup series last month, he wore a band around his wrist with the word Ihumātao. Perenara is one of a growing number of people drawn to support the protest against a housing development of the Ōtuataua Stonefields on the Manukau Harbour, near Auckland’s international airport. The protest was applauded rather than condemned. His coach accepted it, in contrast to the way that similar sporting protests have been treated recently in the United States. Led by young and media-savvy women under the banner SOUL (Save our Unique Landscape), Ihumātao has attracted wide public support. Ihumātao: NZ breaching human rights obligations. AUGUST 12, 2019 Updated August 17, 2019 Week in Review The UN has asked the Government to stop the development of Ihumātao. 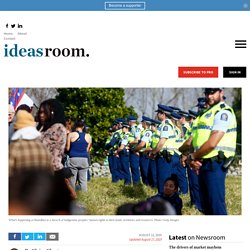 Ihumātao: Everyone was there, e hoa. Māori issues An essay by Wellington poet Tayi Tibble on her experience at Ihumātao. 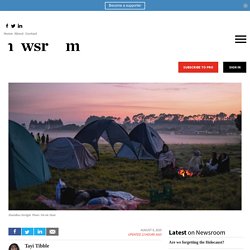 There’s a specific sort of shame in pulling up to Ihumātao in an Uber. The AM Show - Ihumātao Update. Breakfast - Ihumātao is a sacred piece of Māori land, taken by the Crown in 1865 and eventually sold to Fletcher Building – which wants to build almost 500 houses. Ihumātao and the Otuataua Stonefields Historic Reserve photo essay. Ihumātao eviction protest: An occupation 150 years in the making. Ihumātao is being referred to as a modern-day Bastion Point – with peaceful protesters being met in equal numbers by Police. 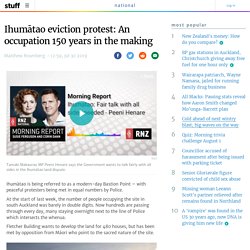 Is Ihumātao an impossible conundrum? - RNZ. The tino rangatiratanga flag is seen at Ihumātao as the day draws to an end for protesters on the land on Friday, 26 July. 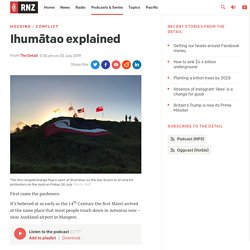 Photo: RNZ First came the gardeners. How art and technology mobilised an army of support for Ihumātao. One thing that has set the fight for Ihumātao apart is the confidence with which multi-media digital communication has been deployed to spread the message far and wide. 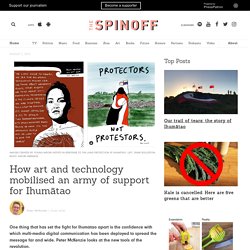 Peter McKenzie looks at the new tools of the revolution. The message was sparse. “Tomorrow, midday, Wellington Cenotaph, there is a rally against the confiscation of land in Ihumātao in Auckland. They need feet on the ground. Calling on everybody. The occupation of Ihumātao: week one. The dispute over land at Ihumātao in southwest Auckland dates back to the wars of 1863, and has been characterised as New Zealand’s ‘trail of tears’. 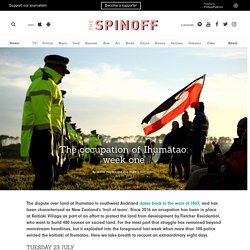 Since 2016 an occupation has been in place at Kaitiaki Village as part of an effort to protect the land from development by Fletcher Residential, who want to build 480 houses on sacred land. For the most part that struggle has remained beyond mainstream headlines, but it exploded into the foreground last week when more than 100 police evicted the kaitiaki of Ihumātao. 'We are with Ihumātao and we are here': Celebs at the protest. Social media has been lighting up as many famous faces travel to Mangere to show their support for, and solidarity with, the Ihumātao protesters over the disputed 32ha of land. 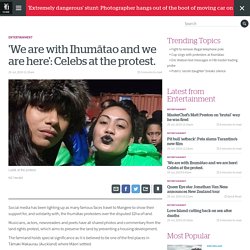 Musicians, actors, newsreaders and poets have all shared photos and commentary from the land rights protest, which aims to preserve the land by preventing a housing development. The farmland holds special significance as it is believed to be one of the first places in Tāmaki Makaurau (Auckland) where Māori settled. Stan Walker has been a major supporter and performed for the protesters last night. Actor Russell Crowe was there in spirit, showing his support from across the ditch. The Project's Kanoa Lloyd has also been a regular visitor at the site, posting some stunning photos from multiple days.

A free concert at the site on Saturday attracted performers like JessB, Troy Kingi and NRG Rising amongst others. JessB, however, was able to perform and posted a powerful image from the protest. Ihumātao development step too far. Protesters at Ihumātao served eviction notices. By RNZ Police are at a disputed housing development in Auckland where an eviction notice has been served against occupiers. 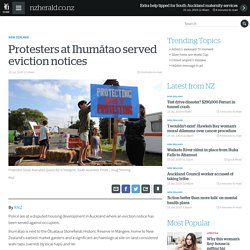 Ihumātao is next to the Ōtuataua Stonefields Historic Reserve in Māngere, home to New Zealand's earliest market gardens and a significant archaeological site on land considered wahi tapu (sacred) by local hapū and iwi. Part of the land, 32 hectares, is zoned as a Special Housing Area and is owned by Fletcher. A group has been occupying the land, near Auckland Airport, in an effort to stop the development going ahead. Counties Manukau District Commander Superintendent Jill Rogers said a dozen officers were assisting a bailiff to serve an eviction notice. Kaumātua and Maori wardens were encouraging the unlawful occupants to leave the site. Two occupants who were inside the site had left peacefully, she said. "This has included negotiations with local iwi, the local marae, the group Save Our Unique Landscape and Fletcher. "It was a powerful message to protesters to leave. Māui street. When worlds collide By Leonie Hayden published NZ Geographic. SOUL remains frustrated that mitigation discussions were entered into so early.

Iwi authorities, says the group, immediately accepted the development as inevitable and turned to negotiation rather than making an attempt at opposition. SOUL also makes the point that a $640,000 “affordable” home—the price being set at 75 per cent of Auckland’s median house price—may not be affordable for the whānau that Taua believes will benefit. Because SOUL does not have the status of a mandated tribal group or iwi authority, and because the Housing Accords and Special Housing Areas Act does not require public consultation, the group has had few opportunities to voice its concerns. “We started off with just trying to get a meeting at council,” says Matata-Sipu. “Nobody wanted to hear us, because we weren’t the official leaders of our tribe, or of our hapū, or of our marae.

The first group to meet SOUL, in 2015, was the Heritage Advisory Panel, chaired by Councillor Mike Lee. But it isn’t a crime. Ihumātao eviction: Planned Auckland development reignites anger of the land wars. The date was July 9, 1863. Armed British and New Zealand troops entered a small, unsuspecting village and forced the inhabitants from the land on which they had lived for 800 years. Even the aged and sick were compelled to pick up what they could carry and leave. Now the small community of Ihumātao, just three kilometres from present-day Auckland International Airport, is the focus of renewed controversy, as the urgent need for new housing clashes with the protection of New Zealand heritage.

"It is one of the sites of earliest human settlement in New Zealand," says historian and writer Vincent O'Malley. The Te Waiohua people, who gave Auckland its original name of Tāmaki Makaurau, settled there about 1100 AD. READ MORE: * Family fight to get name added to Waikato war memorial * Government announces Land Wars Day * Waikato wars commemorated * Historical amnesia over New Zealand's own wars. What Ihumātao reveals about NZ's protection of Māori heritage sites. Softly softly Applications are rarely refused. On average, 496 out of every 500 applications are successful. HNZPT senior legal adviser Geraldine Baumann says this number doesn’t tell the whole story. In the process of application, she says, the agency will discuss options with the iwi and the owner or developer in a bid to reduce the scope of any modification.