Why So Many Rich Kids Come to Enjoy the Taste of Healthier Foods. Daniel found that parents with higher incomes framed the conversation about food waste in very different terms. 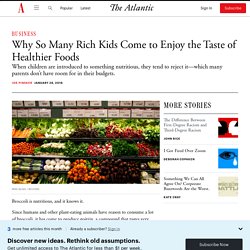 Similar to less wealthy parents, they didn’t like the idea of throwing food out, but they tended to be bothered only by the principle of it, not focusing on the loss of money. One well-off mother who kept packing grapes in her son’s lunchbox only to find them uneaten day after day, told Daniel, “I do feel bad about the waste, but I feel worse about my son not eating well.” Of the parents that Daniel interviewed, those with higher incomes were more likely to say they can afford to waste food, and that rejected food wouldn’t go uneaten. About 3,500 miles away and likely around the same time when Daniel was interviewing Bostonians about their shopping habits, two Danish researchers were independently working on another important, and related, question: Why do well-educated adults have healthier diets than those with less education? 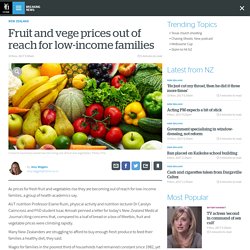 AUT nutrition Professor Elaine Rush, physical activity and nutrition lecturer Dr Carolyn Cairncross and PhD student Issac Amoah penned a letter for today's New Zealand Medical Journal citing concerns that, compared to a loaf of bread or a box of Weetbix, fruit and vegetable prices were climbing rapidly. Many New Zealanders are struggling to afford to buy enough fresh produce to feed their families a healthy diet, they said.

Wages for families in the poorest third of households had remained constant since 1982, yet in May the price of fruit and vegetables rose 14 per cent compared with May 2016, the letter said. In September, fresh produce prices were up 5.7 per cent on the previous year. The unusually high price of some vegetables, in part due to unfavourable weather, has been well publicised this year. Produce prices. Putting the focus on food security and community resilience post Covid-19. Canterbury-based vegetable grower Luke Sole talks to Michael Reynolds, founder and kaitiaki of Christchurch’s Roimata Food Commons and the co-author of the Aotearoa Food Resilience Charter, about how we can transform our food systems. 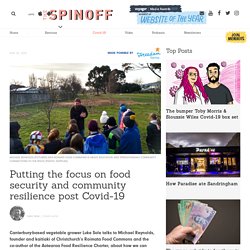 Luke Sole: Can you tell me a bit about your role as the founder and kaitiaki of Ōtautahi’s Roimata Food Commons and how this relates to your role as a food resilience advocate? Michael Reynolds: Roimata Food Commons was a dream that came out of a post-earthquake community project I ran called A Brave New City. There was an overwhelming desire for green spaces to be growing food. I moved to Woolston after that project ended. One day, I walked into Radley Park and was amazed at how much space there was. Half a million NZers suffering from "food insecurity" 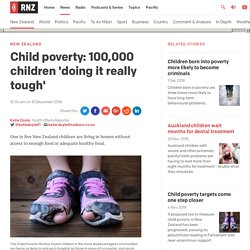 Two South Auckland mothers have opened their finances - and their fridges - in a bid to show how desperate food insecurity has become for low-income families. 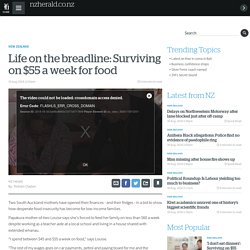 Papakura mother-of-two Louise says she's forced to feed her family on less than $60 a week despite working as a teacher aide at a local school and living in a house shared with extended whanau. "I spend between $45 and $55 a week on food," says Louise. "The rest of my wages goes on car payments, petrol and paying board for me and the children.

"To other people it seems unrealistic but once you get used to it, it's do-able. " Louise's budget is so tight that she normally stores her groceries in two small chilly bins in the bedroom she shares with her daughter, rather than the communal fridge in the kitchen. "I like to have my own supply. When it comes to perishable goods that have to be kept cold, Louise has a simple solution. Food Insecurity Among American Public School Students Requires Aid Beyond Free Lunch Programs. An ugly pastel booklet filled with stamp-shaped vouchers was my embarrassing secret in high school. 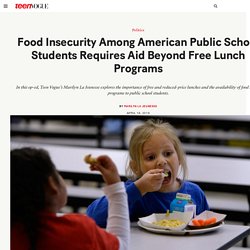 I remember hiding the notepad of free-lunch tickets deep inside my side-satchel book bag, tearing off my proof of lunch in secret so my friends wouldn’t see. I attended school in an affluent neighborhood in Southern California where the median income is nearly $85,000 a year, houses are valued at a median of $780,000, and the number of residents living below the poverty line was less than 8%. My family fit in that latter group, which was not something I wanted my peers, who wore designer clothes and drove BMWs, to know. Food parcel demand rises: 'Food can become a discretionary item' The Auckland City Mission says there's been a disturbingly large increase in people needing food parcels in the last twelve months. 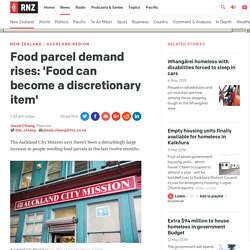 Auckland City Mission Photo: RNZ / Claire Eastham-Farrelly There's been a 28 percent jump in demand - to about 1 million parcels. Chris Farrelly from the mission said while they were used to providing food, there is currently a huge demand. "It's winter that really hits people, often health takes a bashing, something really happens," he said. "[It] just takes them over the ability to provide food on a daily basis and food can become a discretionary item for a family or an individual who has nothing. " He said some people need loans to get them through the season. 'Very, very disturbing': Auckland City Mission food parcel demand soars. Demand for emergency food parcels is up more than a quarter - and it's going to get worse, according to the Auckland City Mission. 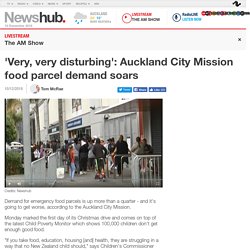 Monday marked the first day of its Christmas drive and comes on top of the latest Child Poverty Monitor which shows 100,000 children don't get enough good food. "If you take food, education, housing [and] health, they are struggling in a way that no New Zealand child should," says Children's Commissioner Andrew Becroft. Eden Park, for the first time, is home to this year's Auckland City Mission Christmas distribution centre. Demand is up 27 percent from last year - that's an extra 5000 food parcels. "It's frightening and very, very disturbing," says Auckland City Mission's Helen Robinson. She's overseeing the massive operation which has also expanded to two south Auckland marae. "Families here are brave and courageous and resilient; often people talk about a deep level of shame they experience by coming here. 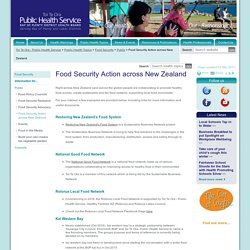 For your interest, a few examples are provided below, including links for more information and useful documents. Restoring New Zealand’s Food System Restoring New Zealand's Food System is a Sustainable Business Network project The Sustainable Business Network is trying to help find solutions to the challenges in the food system, from production, manufacturing, distribution, access and eating through to waste. Global survey. The lived experiences of food insecurity within the context of poverty in Hamilton, New Zealand : a thesis presented in partial fulfilment of the requirements for the degree of Doctor of Philosophy in Psychology at Massey University, Albany, New Zealand. Should coke be cheaper than milk? ’When coke is cheaper than milk it is a national disgrace,’ said Darryl Evans, from the Mangere Budgeting Services Trust, on Campbell Live last week. 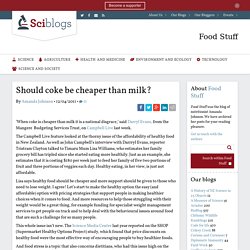 The Campbell Live feature looked at the thorny issue of the affordability of healthy food in New Zealand. As well as John Campbell’s interview with Darrryl Evans, reporter Tristram Clayton talked to Timaru Mum Lisa Williams, who estimates her family grocery bill has tripled since she started eating more healthily. Just as an example, she estimates that it is costing $180 per week just to feed her family of five two portions of fruit and three portions of veggies each day. Healthy eating, in her view, is just not affordable. Empty Food baskets final 29. Families live on charity - food security report. Food security in New Zealand: The relationship between food security, ethnicity and body weight status. Food security. Lack of food contributing to students’ poor health and absenteeism. Food security; from paddock to plate » Horticulture New Zealand. Home › News, Events & Media › Mike's Blog › Food security; from paddock to plate.

Food Security – ANA. A Snapshot of Food Security in Whangarei Northland DHB undertook a project to get a picture of what food security meant for the people residing in four communities (Onerahi (Sherwood area), Otangarei, Raumanga, and Tikipunga) in Whangarei (2016). Tags: Food Security Are we Feeding our Manuhiri to Death? Te Miri Rangi (Ngāti Tūwharetoa) is the founder and author of Whakapapa Fridays, a blog dedicated to sharing a Māori perspective on health, physical activity, nutrition and wellbeing. No, poor New Zealand families can’t just ‘grow their own vegetables’ Sharing Our Baskets. Rising food security concerns among New Zealand adolescents and association with health and wellbeing: Kōtuitui: New Zealand Journal of Social Sciences Online: Vol 13, No 1.

What are the determinants for food insecurity in NZ? Does it differ by gender?