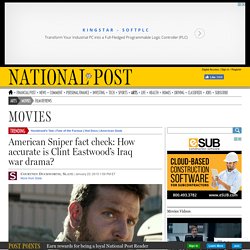 He had gained notoriety during the Iraq War — with 160 confirmed kills out of a possible 255, Kyle remains the deadliest sniper in U.S. military history. Almost two years later, actor-director Clint Eastwood has transformed the 2012 memoir American Sniper from a bestseller into a box-office hit. Controversy over Kyle’s credibility casts doubts on the film, however — claims that he engaged in a bar fight with former Minnesota governor and pro wrestler Jesse Ventura, sniped looters in New Orleans after Hurricane Katrina, and killed two carjackers all remain unsubstantiated.

(The first was the subject of a US$1.845-million defamation lawsuit Ventura brought and won against Kyle.) The Iraq War from the Point of View of Iraqi's. An Iraqi Perspective: How America's Destruction of Iraqi Society Led to Today's Chaos. Raed Jarrar. 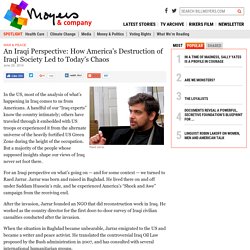 In the US, most of the analysis of what’s happening in Iraq comes to us from Americans. A handful of our “Iraq experts” know the country intimately; others have traveled through it embedded with US troops or experienced it from the alternate universe of the heavily fortified US Green Zone during the height of the occupation. No longer forgotten: a Kurdish view of the Iraq war. "Did it happen? 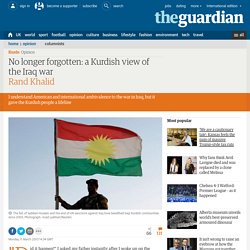 " I asked my father instantly after I woke up on the morning of 20 March 2003, to which my father replied with a smile, "Yes". Yes, the United States of America and its allies began their attacks on Iraq. Yes, my life was going to change. And it did. The Iraq War: Background and History : includes videos. Prelude to War: Saddam Hussein led a brutal dictatorship of Iraq from 1979 to 2003. 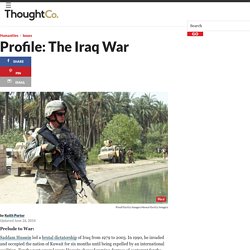 In 1990, he invaded and occupied the nation of Kuwait for six months until being expelled by an international coalition. For the next several years Hussein showed varying degrees of contempt for the international terms agreed to at the end of the war, namely a "no-fly zone" over much of the country, international inspections of suspected arms sites, and sanctions. War in The Middle East. Written by Peter Fitzgerald History of War - War in The Middle East Clockwise, starting at top left: a joint patrol in Samarra; the toppling of the Saddam Hussein statue in Firdos Square; an Iraqi Army soldier readies his rifle during an assault; a roadside bomb detonates in South Baghdad. 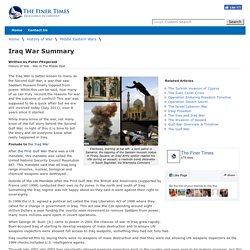 Via Wikimedia Commons The Iraq War is better known to many as the Second Gulf War, a war that saw Saddam Hussein finally toppled from power. Overview: The Iraq War. 2003-2011. Iraq War, also called Second Persian Gulf War, (2003–11), conflict in Iraq that consisted of two phases. 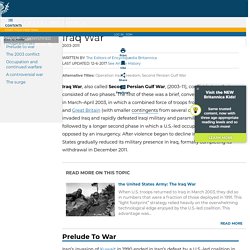 The first of these was a brief, conventionally fought war in March–April 2003, in which a combined force of troops from the United States and Great Britain (with smaller contingents from several other countries) invaded Iraq and rapidly defeated Iraqi military and paramilitary forces. It was followed by a longer second phase in which a U.S. -led occupation of Iraq was opposed by an insurgency. After violence began to decline in 2007, the United States gradually reduced its military presence in Iraq, formally completing its withdrawal in December 2011. Prelude to war. I was an American sniper, and Chris Kyle’s war was not my war. I spent nights in Iraq lying prone and looking through a 12-power sniper scope. 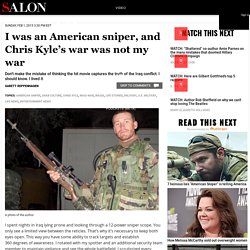 You only see a limited view between the reticles. That’s why it’s necessary to keep both eyes open. Chris Kyle and the Iraq war are more complex than American Sniper – or criticism of it. Americans love war movies – they always have – and they love their movies far more than they love going to war. 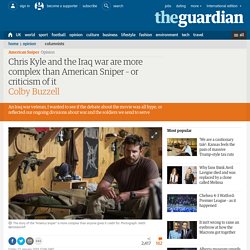 I enjoy war movies too but, since serving in Iraq during the war, you would’ve all but had to point a loaded gun to my head to get me to watch a Hollywood version of the Iraq war. Not because the experience of war was that bad for me – it was - but because I’m deathly afraid the war movie that Hollywood is going to produce will be. Clint Eastwood at 80: profile of a Hollywood legend. Directors may occasionally be shown respect, perhaps even asked for their autograph, in America, but no one actually likes them. 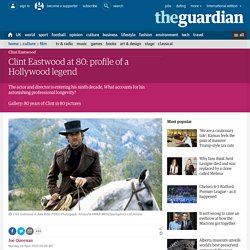 People may admire or envy James Cameron or Steven Spielberg or Francis Ford Coppola or Martin Scorsese, and a significantly smaller group of filmgoers may look forward to Woody Allen's next outing, but they don't have much of an emotional connection with them. This is what makes Clint Eastwood's career so singular. Because he started out as an actor, and very quickly became an actor that a large segment of the population positively adored, in the same way that they adored Jimmy Cagney and Cary Grant and both Hepburns, Eastwood has long benefited from a personal relationship with the American people that no other living director can even dream of. Clint Eastwood Movie Reviews & Film Summaries. A preview of the 2017 Cannes Film Festival. 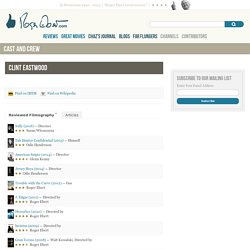 Continue reading → 25 films we can't wait to check out during the summer movie season. Continue reading → Great Director profile. B. Clinton Eastwood Jr b. May 31, 1930, San Francisco, California, USA filmographybibliographyarticles in Sensesweb resources Over the past three decades Clint Eastwood has been responsible for directing a varied range of films that have garnered both popular and critical acclaim. The Clint Eastwood Taxonomy: What Are His Best Films as a Director? - The Atlantic. This article is from the archive of our partner This weekend, Clint Eastwood's 33rd film Jersey Boys, will be released in theaters. He's one of American cinema's most prolific directors—those 33 films span just 43 years—he's won a slew of awards, and he's a constant fixture at film festivals like Cannes and Venice. The Films Of Clint Eastwood, Director: A Retrospective. On May 31st this year, Clinton “Clint” Eastwood reached 80 years of age, and he’s been acting for 56 of them.

Remarkably, since TV show “Rawhide” made him a star in 1958, he’s been at the top for almost all that time, having had major box office hits in every decade since the ’60s: most recently, “Gran Torino,” which surprised most pundits by taking in over $250 million worldwide. There’s never quite been an acting career like it, and a retrospective on Clint Eastwood: movie star, would show the breadth and depth of his career.

35 Clint Eastwood movies, ranked from worst to best - Time Out. Clint Eastwood - The Filmography. Clint Eastwood is one of the true Hollywood greats. Since the 1960's, audiences around the world have been fascinated by Eastwood's style -- with his deceptively soft voice, squinty eyes, and world-weary cynicism, Clint Eastwood has built up an awesome reputation as one of the meanest, yet coolest, heroes of the screen. Eastwood's career started rather uninspiringly back in the mid 1950's, with brief appearances in low-budget horror movies and T.V. commercials.

A few years later, he acquired more notability as Rowdy Yates in the hit T.V. Western Rawhide. The Ethical Vision of Clint Eastwood. Pointing Eastwood: Clint Eastwood’s Moral Compass… Clint Eastwood is a fascinating director. It’s hard to imagine, watching those early Spaghetti Westerns, that the badass cowboy would emerge as one of the great American directors. To be honest, while he wasn’t the first major actor to work behind the camera, I think that Eastwood really paved the way for established actors being taken seriously as directors.