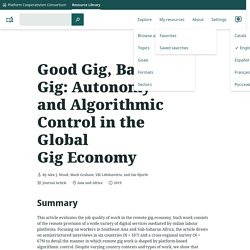 Such work consists of the remote provision of a wide variety of digital services mediated by online labour platforms. Focusing on workers in Southeast Asia and Sub-Saharan Africa, the article draws on semistructured interviews in six countries (N = 107) and a cross-regional survey (N = 679) to detail the manner in which remote gig work is shaped by platform-based algorithmic control. Despite varying country contexts and types of work, we show that algorithmic control is central to the operation of online labour platforms. Algorithmic management techniques tend to offer workers high levels of flexibility, autonomy, task variety and complexity.

Abstract This article describes an emergent logic of accumulation in the networked sphere, ‘surveillance capitalism,’ and considers its implications for ‘information civilization.’ 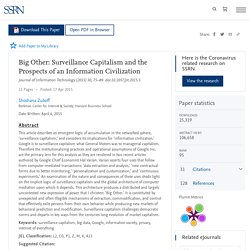 Google is to surveillance capitalism what General Motors was to managerial capitalism. Therefore the institutionalizing practices and operational assumptions of Google Inc. are the primary lens for this analysis as they are rendered in two recent articles authored by Google Chief Economist Hal Varian. Varian asserts four uses that follow from computer-mediated transactions: ‘data extraction and analysis,’ ‘new contractual forms due to better monitoring,’ ‘personalization and customization,’ and ‘continuous experiments.’ An examination of the nature and consequences of these uses sheds light on the implicit logic of surveillance capitalism and the global architecture of computer mediation upon which it depends. Big Other: Surveillance Capitalism and the Prospects of an Information Civilization by Shoshana Zuboff. 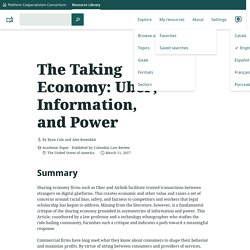 This creates economic and other value and raises a set of concerns around racial bias, safety, and fairness to competitors and workers that legal scholarship has begun to address. Missing from the literature, however, is a fundamental critique of the sharing economy grounded in asymmetries of information and power. This Article, coauthored by a law professor and a technology ethnographer who studies the ride-hailing community, furnishes such a critique and indicates a path toward a meaningful response. Commercial firms have long used what they know about consumers to shape their behavior and maximize profits. By virtue of sitting between consumers and providers of services, however, sharing economy firms have a unique capacity to monitor and nudge all participants — including people whose livelihood may depend on the platform. It’s Not Technology That’s Disrupting Our Jobs – Platform Cooperativism Resource Library. Coronavirus Exposes Workers to the Risks of the Gig Economy – Platform Cooperativism Resource Library.

Drivers for Uber and Lyft in Seattle say demand for rides has plummeted, and they have few workplace benefits to fall back on. 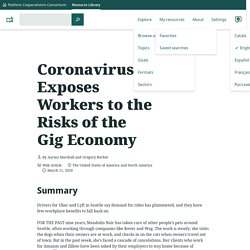 FOR THE PAST nine years, Mandolin Noir has taken care of other people’s pets around Seattle, often working through companies like Rover and Wag. The work is steady; she visits the dogs when their owners are at work, and checks in on the cats when owners travel out of town. But in the past week, she’s faced a cascade of cancelations. Her clients who work for Amazon and Zillow have been asked by their employers to stay home because of Covid-19, and vacations have been canceled. Now Noir is trying to find a full-time job—no easy task when half of Seattle is shut down and, as the local health department said on Tuesday, the disease is “spreading more rapidly” in the county. In Times of the Pandemic, This Cannot Wait. We’re Not Going Back to Normal. The End of Employment and the Future of the ‘Sharing Economy’ : Trebor Scholz : Free Download, Borrow, and Streaming.