New doubts on Zika as cause of microcephaly. Brazil's microcephaly epidemic continues to pose a mystery -- if Zika is the culprit, why are there no similar epidemics in other countries also hit hard by the virus? 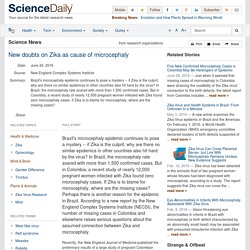 In Brazil, the microcephaly rate soared with more than 1,500 confirmed cases. But in Colombia, a recent study of nearly 12,000 pregnant women infected with Zika found zero microcephaly cases. Huge New Doubts that Zika Causes Microcephaly. When the media first whipped the public into a froth about the Zika virus and its supposed triggering of microcephalic (small headed) babies in 2015, I was immediately skeptical of the entire story along with many of my friends and colleagues in the field of alternative health. 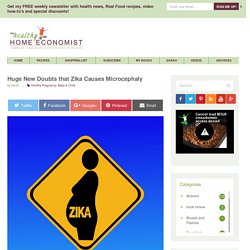 Major media, after all, doesn’t exactly have a solid reputation for covering epidemics accurately and objectively. If you doubt this, consider that since 2002, there have been no less than four localized epidemics that the CDC warned were going to cause worldwide armageddon. Let me refresh your memory if these events don’t readily come to mind: SARS: This first mutated viral scare occurred from 2002 -2003. It quickly fizzled to nothing with not a single new case of SARS reported worldwide since 2004.Bird flu: Remember this doozy from 2006? CDC Admits Fabricating Link Between Zika Virus And Microcephaly. Amid a media frenzy over the spread of the Zika virus worldwide, the CDC have been forced to admit that people are able to self-immunize against the virus, and have also suggested that Zika itself does not cause Microcephaly. 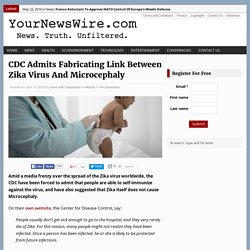 On their own website, the Center for Disease Control, say: People usually don’t get sick enough to go to the hospital, and they very rarely die of Zika. Deadly medicines and organised crime. When half a million Americans died and nobody noticed. ARE American lives cheaper than those of the Chinese? 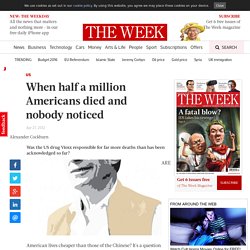 It's a question raised by Ron Unz, publisher of The American Conservative, who has produced a compelling comparison between the way the Chinese dealt with one of their drug scandals – melamine in baby formula - and how the US handled the Vioxx aspirin-substitute disaster. The Chinese scandal surfaced in 2008, shortly before the Beijing Olympics. Crooked dairymen diluted their milk products, then added a plastic chemical compound called melamine to raise the apparent protein content back to normal levels. Nearly 300,000 babies across China suffered urinary problems, with many hundreds requiring lengthy hospitalisation for kidney stones. 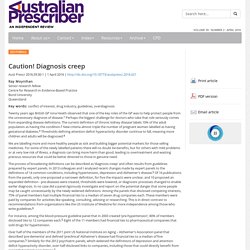 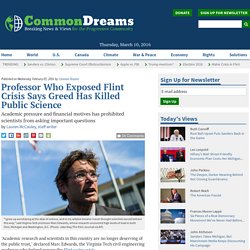 In an interview published in the Chronicle of Higher Education on Tuesday, Edwards explained how the pressures put on academics to secure funding are forcing scientists to abandon work done in the public interest and that similar financial motives are causing government science agencies to ignore inconvenient truths—like high levels of lead in public drinking water. GlaxoSmithKline fined $3bn after bribing doctors to increase drugs sales. The pharmaceutical group GlaxoSmithKline has been fined $3bn (£1.9bn) after admitting bribing doctors and encouraging the prescription of unsuitable antidepressants to children. 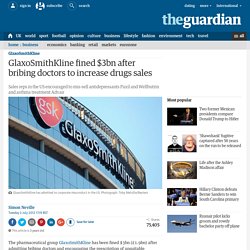 Glaxo is also expected to admit failing to report safety problems with the diabetes drug Avandia in a district court in Boston on Thursday. Pharmaceutical companies cause doctors to receive biased information about drugs ‘costing hundreds of thousands of lives’ Pharmaceutical companies are causing biased information to be given to doctors about the efficacy of drugs, causing an epidemic of misinformed practitioners that is “costing hundreds of thousands of lives” across the world, it has been claimed. 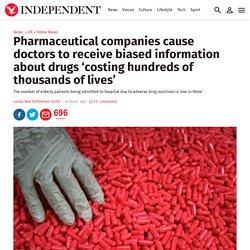 Speaking to The Independent, Dr Aseem Malhotra, an NHS cardiologist and a trustee of the King’s Fund health think tank, claims there is “a systemic lack of transparency in the information being given to doctors to prescribe medication, in terms of the benefits of drugs being grossly exaggerated and their side effects under reported in studies”. Dr Malhotra said the prevalence of pharmaceutical companies, which are “profit making businesses” being able to fund studies and drug trials causes biased information to be recorded and reported on in medical journals. This is in turn “creating an epidemic of misinformed doctors,” he said, stressing that the heart of the issue is “corporate interest trumping patient interest”. UCLA Doctor to Face Jury Trial in Medical Kidnap Case. Hospitals are becoming one of the most dangerous places in America for children, due to the increase in medical kidnappings. 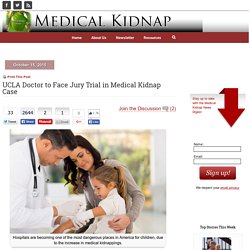 Health Impact News Editor Comments As the new pediatric specialty of “Child Abuse Specialist” continues to expand and take children away from parents based on suspected “medical abuse” or “medical neglect,” it was inevitable that one of these cases where a child was wrongly taken away from good parents based on the expert opinion of these “Child Abuse” doctors would make its way through the courts. Recently the Ninth Circuit Court ruled that Dr. Claudia Wang, the medical director of UCLA’s Suspected Child Abuse and Negligence (SCAN) team, does not have immunity from civil lawsuits.

To learn more about the new Child Abuse Specialty, see: Are New Pediatric “Child Abuse Specialists” Causing an Increase in Medical Kidnappings? A new, evidence-based estimate of patient harms associated with hospital care. Seeing Green: Reflections on 10 Years of Mito Disease Awareness - The Thinking Moms' Revolution. In my early Thinking days, witnessing multiple neurological symptoms appear and then fade, I was introduced to the complexity of mitochondrial diseases or “mito” for short. 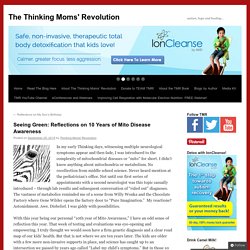 I didn’t know anything about mitochondria or metabolism. No recollection from middle school science. Vaccine McCarthyism. What if the Vaccine Paradigm itself is Deliberately Flawed? Within the mainstream medical and scientific community there is an unassailable pseudo-truth that vaccines are safe and effective, whether administered individually or in combination. Within the vaccine injured children and autism movements there is also an unchallenged belief that vaccines are effective but not always safe.

In this case, vaccine-injured children or adult family members were simply one of the rare cases where they received a hot lot vaccine or possessed biomolecular abnormalities, such as mitochondria dysfunction, and suffered the consequences. Even many parents with two children developing neurological complications after vaccination, will continue to follow the recommended vaccine schedule. DeStefano Rides Again: GSK Rotavirus Vaccine Study Loses 80% Of Cases And 18 Deaths. By John Stone Frank DeStefano, the CDC's Director of Immunization Safety and the lead author at the centre of CDC whistleblower William Thompson’s allegations about destroying MMR/autism data, is involved in another case of apparently hiding data, this time involving intussusception and death, in a newly published paper concerning the safety of GSK’s rotavirus vaccine, Rotarix - a vaccine given according to schedule to infants at 2 and 4 months in the US, and 2 and 3 months in the UK.

Last month Representative Posey revealed Congress that Thompson told Dr Brian Hooker in a taped telephone conversation regarding the DeStefano MMR paper that: Sometime soon after the meeting, we decided to exclude reporting any race effects, the co-authors scheduled a meeting to destroy documents related to the study. Glaxo Agrees to Pay $3 Billion in Fraud Settlement. In the largest settlement involving a pharmaceutical company, the British drugmaker agreed to plead guilty to criminal charges and pay $3 billion in fines for promoting its best-selling antidepressants for unapproved uses and failing to report safety data about a top diabetes drug, federal prosecutors announced Monday.

The agreement also includes civil penalties for improper marketing of a half-dozen other drugs. The fine against GlaxoSmithKline over , Wellbutrin, and the other drugs makes this year a record for money recovered by the federal government under its so-called whistle-blower law, according to a group that tracks such numbers. FDA inspections: Fraud, fabrication, and scientific misconduct are hidden from the public and doctors. Photo by RCarner/Thinkstock Agents of the Food and Drug Administration know better than anyone else just how bad scientific misbehavior can get.

A Drug Recall That Should Frighten Us All About The FDA. GlaxoSmithKline fined $3bn after bribing doctors to increase drugs sales. Antibiotic Exposure Could Increase Juvenile Arthritis Risk. Taking antibiotics may increase the risk that a child will develop juvenile arthritis, according to a study from Rutgers University, University of Pennsylvania and Nemours A.I. duPont Hospital for Children published today in Pediatrics.