In praise of Teach First. Around 6 months ago, I was asked to deliver a CPD session to my school about effective revision strategies to help pupils remember, following my pupil’s ability to recall large amounts of information being noted in a SLT lesson observation. 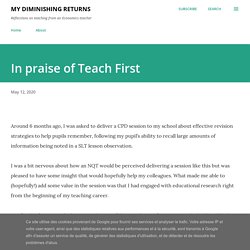 I was a bit nervous about how an NQT would be perceived delivering a session like this but was pleased to have some insight that would hopefully help my colleagues. What made me able to (hopefully!) Add some value in the session was that I had engaged with educational research right from the beginning of my teaching career. Not for the first time I had reason to be grateful to Teach First for giving me the building blocks to be a research-informed teacher right from the start, a process that started right from Summer Institute. The Link and Story Methods Remembering a Simple List. © VeerPakhnyushchyy Vitaliy Create a colourful story and remember more.

The Link Method is one of the easiest mnemonic techniques available. You use it by making simple associations between items in a list, linking them with a vivid image containing the items. Taking the first image, create a connection between it and the next item (perhaps in your mind smashing them together, putting one on top of the other, or suchlike.) Then move on through the list linking each item with the next.

The Story Method is very similar, linking items together with a memorable story featuring them. How to Use the Link and Story Methods It is quite possible to remember lists of words using association only. Given the fluid structure of this mnemonic it is important that the images stored in your mind are as vivid as possible. Memory Improvement Techniques - Start Here – From MindTools.com. © Getty ImagesStreetCandy Mnemonics and observation can help you to unleash more of your memory power. 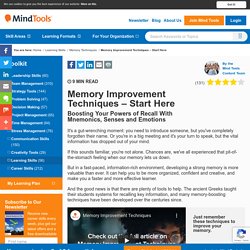 It's a gut-wrenching moment: you need to introduce someone, but you've completely forgotten their name. Or you're in a big meeting and it's your turn to speak, but the vital information has dropped out of your mind. If this sounds familiar, you're not alone. Chances are, we've all experienced that pit-of-the-stomach feeling when our memory lets us down. How sleep is key to learning new words. What does it mean to know a word? 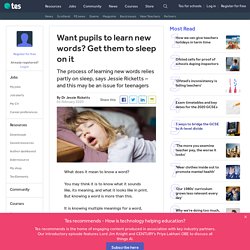 You may think it is to know what it sounds like, its meaning, and what it looks like in print. WILLINGHAM(2) LearningStylesandMemoryBooklet. Language Acquisition Theory. By Henna Lemetyinen, published 2012 Language is a cognition that truly makes us human. 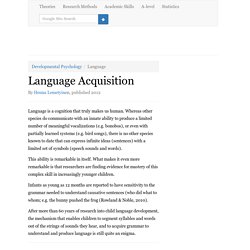 Whereas other species do communicate with an innate ability to produce a limited number of meaningful vocalizations (e.g. bonobos), or even with partially learned systems (e.g. bird songs), there is no other species known to date that can express infinite ideas (sentences) with a limited set of symbols (speech sounds and words). This ability is remarkable in itself. What makes it even more remarkable is that researchers are finding evidence for mastery of this complex skill in increasingly younger children. Infants as young as 12 months are reported to have sensitivity to the grammar needed to understand causative sentences (who did what to whom; e.g. the bunny pushed the frog (Rowland & Noble, 2010). Early Theories One of the earliest scientific explanations of language acquisition was provided by Skinner (1957). 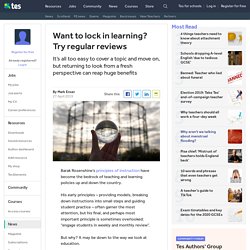 His early principles – providing models, breaking down instructions into small steps and guiding student practice – often garner the most attention, but his final, and perhaps most important principle is sometimes overlooked: “engage students in weekly and monthly review”. Why every teacher should be using dual coding. The principle of dual coding, as first put forth by Allan Paivio in 1971, states that our brains can process information from two channels at the same time. 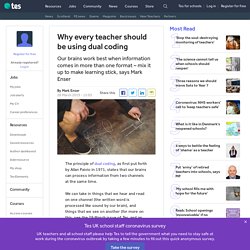 We can take in things that we hear and read on one channel (the written word is processed like sound by our brain), and things that we see on another (for more on this, see the 29 March issue of Tes, and an interview with Professor Uta Noppeney). Dual coding has some important implications for the classroom. Quick read: Do pictures really help with learning? Quick listen: What teachers need to know about the teenage brain Want to know more? A teacher’s job involves a great deal of explanation. Barak Rosenshine’s seminal study on methods of instruction suggests that the most effective teachers talk for a greater proportion of the lesson than less effective ones.

That’s where dual coding – at its simplest, presenting images alongside text or speech – can help. Rachelhawkes.com - Memory. The ability to retain and recall new words (with increasing speed) is central to language learning and, alongside an ability to pronounce the foreign language well and the ability to put together words and structures into new sentences, it is one of the three essential skills we focus on from Y7. 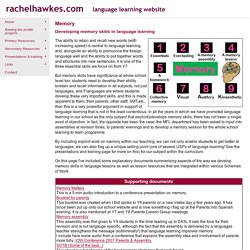 But memory skills have significance at whole school level too; students need to develop their ability toretain and recall information in all subjects, not just languages, and if languages are where students develop these very important skills, and this is made apparent to them, their parents, other staff, SMT,etc.. then this is a very powerful argument in support of language learning that is not in the least contentious. In all the years in which we have promoted language learning in our school as the only subject that explicitlydevelops memory skills, there has not been a single word of objection. 2025 1592 2 PB. Cognitive load theory: what teachers need to know. Cognitive Load Theory (CLT) is all the rage. 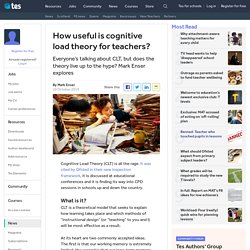 It was cited by Ofsted in their new inspection framework, it is discussed at educational conferences and it is finding its way into CPD sessions in schools up and down the country. What is it? CLT is a theoretical model that seeks to explain how learning takes place and which methods of “instructional design” (or “teaching” to you and I) will be most effective as a result. At its heart are two commonly accepted ideas. The first is that our working memory is extremely limited, the second is that our long-term memory is essentially limitless; we can store information and retrieve it when needed, thereby freeing up space in our working memory.

The theory suggests that we consider the “load” placed on working memory by a task pupils have been given. The more difficult the task, or the more novel the information (how far it is removed from what the pupil already knows) the higher the load. The single most important thing... The final foot.