Why your Spotify or Netflix for print content is probably doomed. Back when the iPad was just a rumor, there was much excitement within the newspaper and magazine industries at the idea that this new device might allow them to create a kind of “iTunes for news,” in which readers would pay a monthly fee for an all-you-can-read subscription to their content. 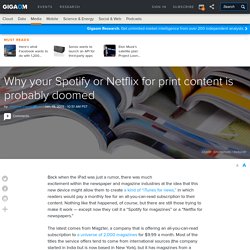 Nothing like that happened, of course, but there are still those trying to make it work — except now they call it a “Spotify for magazines” or a “Netflix for newspapers.” Why your Spotify or Netflix for print content is probably doomed. Twitter’s “buy now” button could finally unlock micropayments for the media. To say Twitter has had a love/hate relationship with micropayments would be putting it mildly. 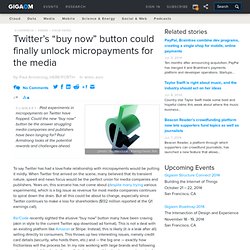 When Twitter first arrived on the scene, many believed that its transient nature, speed and news focus would be the perfect union for media companies and publishers. LaterPay – Use Now, Pay Later. New Newsweek Taps Slovakian Paywall Gurus for an Ambitious Relaunch. Flattr. Flattr is a Sweden-based microdonation provider founded by Peter Sunde and Linus Olsson and launched in March 2010.[1] History[edit] In March 2010 Flattr launched via an invitation-only basis[2] and then opened to the public on 12 August of the same year.[3][4] Flattr is a project started by Peter Sunde and Linus Olsson. 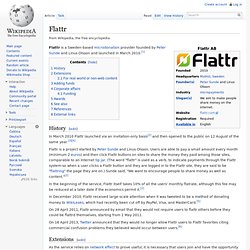 Users are able to pay a small amount every month (minimum 2 euros) and then click Flattr buttons on sites to share the money they paid among those sites, comparable to an Internet tip jar. (The word "flattr" is used as a verb, to indicate payments through the Flattr system-so when a user clicks a Flattr button and they are logged in to the Flattr site, they are said to be "flattring" the page they are on.) In the beginning of the service, Flattr itself takes 10% of all the users' monthly flatrate, although this fee may be reduced at a later date if the economics permit it.[2] Extensions[edit]

How to Save Your Newspaper. This story has been modified from its original version During the past few months, the crisis in journalism has reached meltdown proportions. 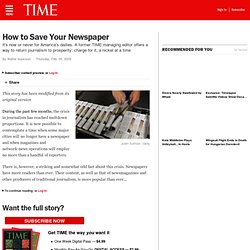 It is now possible to contemplate a time when some major cities will no longer have a newspaper and when magazines and network-news operations will employ no more than a handful of reporters. There is, however, a striking and somewhat odd fact about this crisis. Newspapers have more readers than ever. Their content, as well as that of newsmagazines and other producers of traditional journalism, is more popular than ever... Subscribe Now Get TIME the way you want it. Micropayments: A rainbow for journalism...or a Hail Mary? (Photo credit: flickr user [177]) Here’s a funny question: Did you pay to read this? 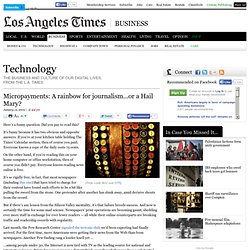 It’s funny because it has two obvious and opposite answers. If you’re at your kitchen table holding The Times’ Calendar section, then of course you paid. Everyone knows a copy of the daily costs 75 cents. On the other hand, if you’re reading this on your home computer or office workstation, then of course you didn’t pay. It’s so rigidly free, in fact, that most newspapers (including this one) that have tried to charge for their content have found such efforts to be a bit like pulling the sword from the stone.

But if there’s any lesson from the Silicon Valley mentality, it’s that failure breeds success. Last month, the Pew Research Center signaled the tectonic shift we’d been expecting had finally arrived. ...among people under 30, the Internet is now tied with TV as the leading source for national and international news. iTunes proves newspapers can and should charge for online access. I was standing recently before a classroom full of fresh-faced journalism students at a local high school. 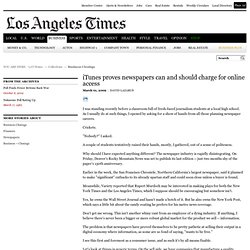 As I usually do at such things, I opened by asking for a show of hands from all those planning newspaper careers. Crickets. "Nobody? " I asked. The Media Equation - Will Someone Please Invent iTunes for News? » Why Small Payments Won’t Save Publishers Clay Shirky. With continued turmoil in the advertising market, people who work at newspapers and magazines are wondering if micropayments will save them, with recent speculation in this direction by David Sarno of the LA Times, David Carr of the NY Times, and Walter Isaacson in Time magazine. 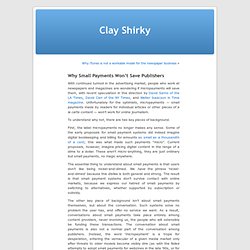 Unfortunately for the optimists, micropayments — small payments made by readers for individual articles or other pieces of a la carte content — won’t work for online journalism. To understand why not, there are two key pieces of background. First, the label micropayments no longer makes any sense. » Why iTunes is not a workable model for the newspaper business Clay Shirky. (Note: This is more backstory than post. 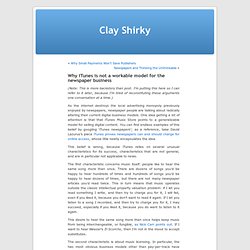 I’m putting this here so I can refer to it later, because I’m tired of reconstituting these arguments one conversation at a time.) As the internet destroys the local advertising monopoly previously enjoyed by newspapers, newspaper people are talking about radically altering their current digital business models. One idea getting a lot of attention is that that iTunes Music Store points to a generalizable model for selling digital content.

You can find endless examples of this belief by googling ‘iTunes newspapers’; as a reference, take David Lazurus’s piece iTunes proves newspapers can and should charge for online access, whose title neatly encapsulates the idea. This belief is wrong, because iTunes relies on several unusual characteristics for its success, characteristics that are not general, and are in particular not applicable to news. The first characteristic concerns music itself: people like to hear the same song more than once. Why Jason Kilar’s rumored “Hulu for magazines” startup probably isn’t going to work. According to a recent report at Re/code, former Hulu founder and CEO Jason Kilar — who left the streaming online-video company a year ago — has been pitching publishers on a service he is trying to build that would offer magazine and even newspaper content via a Hulu-style model. 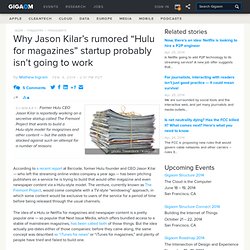 The venture, currently known as The Fremont Project, would come complete with a TV-style “windowing” approach, in which some content would be exclusive to users of the service for a period of time before being released through the usual channels. Next Issue, magazines and paving media cow paths. Newspapers get most of the press when it comes to the disruption of the mainstream media industry, but magazines are also struggling to find a digital model that works. 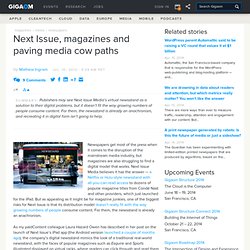 Next Issue Media believes it has the answer — a Netflix or Hulu-style newsstand with all-you-can-read access to dozens of popular magazine titles from Condé Nast and other providers, which just launched for the iPad. But as appealing as it might be for magazine junkies, one of the biggest risks for Next Issue is that its distribution model doesn’t really fit with the way growing numbers of people consume content. For them, the newsstand is already an anachronism.

Markham Nolan » News needs to go Netflix. The way we buy news is a ridiculous bundling mess. The news needs to go Netflix. I don’t buy weekday newspapers now, that change happened years ago, because no one newspaper is going to have all the news I want to read. Simple fact. Buying one paper means a lot of redundancy. Take Thursday. Where Is Our Netflix for News or ITunes for Ideas? If “Googlezon” is becoming a reality, as predicted in the dystopian Epic2014 video produced 10 years ago, should we users of Google and Amazon at least get some benefits? Shouldn’t we draw direct advantages from the real-life takeover of the Washington Post by Amazon.com Inc.’s chief executive officer? The sale offers the news industry another chance to fully join the technology revolution that it has long covered and envied. J'aime l'info. A money-back guarantee: How Blendle hopes to convince Dutch news readers to pay by the article. The idea came to Marten Blankesteijn as the team behind Blendle, a new Dutch newsreading platform that allows readers to pay by the article, was out for beers one Friday night: Readers should be refunded if they don’t like an article for any reason.

“When my co-founder first proposed the idea, I thought he was crazy,” Alexander Klöpping, Blendle’s co-founder told me. “After a half hour I started to understand and after an hour I thought, Yeah this really might be one of the most important parts of the product.” Blendle takes content from 15 or so of the Netherlands’ top newspaper and magazine publishers and allows users to buy stories individually, with just a click, no matter where they were originally published. The publishers set the price and take 70 percent of the revenue while Blendle takes the other 30 percent.

Four lessons from the world of mobile gaming to get people to pay for news. I've spent a lot of time contemplating paid content strategies and alternative revenue streams for digital news operations, so when I recently attended the Mobile Games Forum, it felt like catching a glimpse into a parallel universe aeons ahead in terms of user monetisation. While news publishers are starting to turn to paywalls and move away from an almost complete reliance on advertising, game publishers are already creating experiences that attract millions of paying users and, according to Shai Drori of Appsfire who spoke at the event, "most revenue for mobile games is coming from in-app purchases, not advertising.

" Mobile games are generally categorised into two groups when it comes to monetisation: pay-to-play and free-to-play. Pay-to-play apps act much like the paywall of The Times of London, in that one must pay before downloading the app and accessing any of its content. 1) Payment can come in many forms.