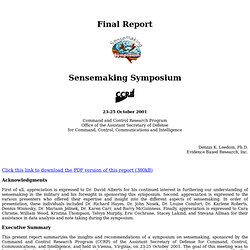 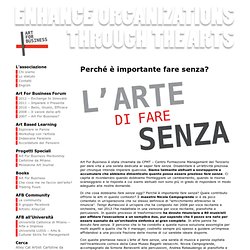 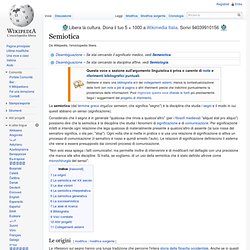 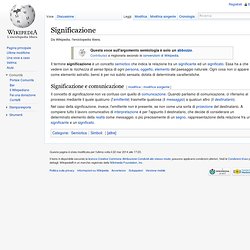 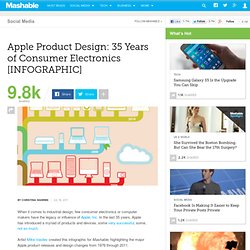 In the last 35 years, Apple has introduced a myriad of products and devices, some very successful, some, not so much. Artist Mike Vasilev created this infographic for Mashable, highlighting the major Apple product releases and design changes from 1976 through 2011. With rumors of the iPhone 5, iPhone 6 and a smaller, lower-cost iPhone all spreading through the technosphere, we feel certain that at least one more item will be added to the "redesign" list before 2011 closes out.

A re-examination of information seeking behaviour in the context of activity theory. T.D. 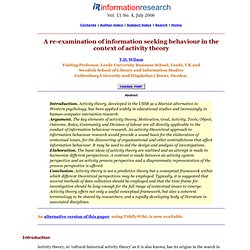 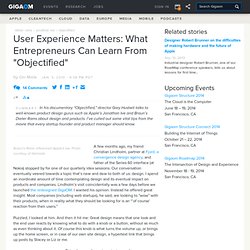 Photo courtesy of Gizmodo A few months ago, my friend Christian Lindholm, partner at Fjord, a convergence design agency, and father of the Series 60 interface (at Nokia) stopped by for one of our quarterly idea sessions. Our conversation eventually veered towards a topic that’s near and dear to both of us: design. I spend an inordinate amount of time contemplating design and its eventual impact on products and companies. Lindholm’s visit coincidentally was a few days before we launched the redesigned GigaOM. La ricerca del significato. Per una psicologia culturale Saggi. Psicologia: Amazon.it: Jerome S. Bruner, E. Prodon. Teoria della pertinenza. Da Wikipedia, l'enciclopedia libera. 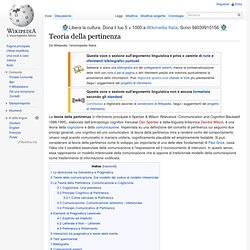 Relevance theory. Relevance theory is a proposal by Dan Sperber and Deirdre Wilson that seeks to explain the second method of communication: one that takes into account implicit inferences. 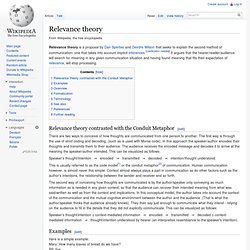 [clarification needed] It argues that the hearer/reader/audience will search for meaning in any given communication situation and having found meaning that fits their expectation of relevance, will stop processing. [edit] There are two ways to conceive of how thoughts are communicated from one person to another. The first way is through the use of strict coding and decoding, (such as is used with Morse code). In this approach the speaker/author encodes their thoughts and transmits them to their audience. Speaker's thought/intention ⇒ encoded ⇒ transmitted ⇒ decoded ⇒ intention/thought understood. This is usually referred to as the code model[1] or the conduit metaphor[2] of communication. The Story of Linux: Commemorating 20 Years of the Linux Operating System. «Sono morto e questo è l'ultimo post» iPad city, sempre amara per gli operai. Foto Il motore Corvette? Lo costruisco io - 1 di 5. 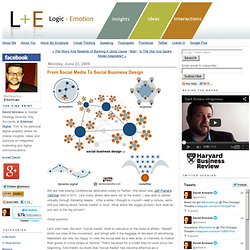 Like many others who were not at the event, I was able to attend virtually through following tweets. After a while I thought to myself—wait a minute, we're still just talking about "social media" in silos. What about the bigger picture? And what do you ask is the big picture? Great question. Towards social business design. Risultato della ricerca immagini di Google per. Literary theory. Literary theory is an umbrella term for many different movements in the formal study of texts. Specific theories are distinguished not only by their methods and conclusions, but even by how they define "text. " For many, "texts" means "literary (i.e. 'high' art) texts" (see literature). But different principles and methods of literary theory have been applied to non-fiction, pop fiction, film, historical documents, law, advertising, etc.

An introduction to intertextuality. In traditional literary theory, it is assumed that when we read a work of literature we are trying to find a meaning which lies inside that work. Literary texts possess meaning, and that is why readers extract meaning from them. The process of extracting meaning from texts is called interpretation. However, in contemporary literary and cultural theory such ideas have been radically changed. It is now believed that works of literature are built from systems, codes, and traditions established by previous works of literature. Crucial to the meaning of a work of literature are also the systems, codes, and traditions of other art forms, such as films, and of culture in general. Dynamic Theory of Meaning: New Opportunities for Cognitive Modeling. Dynamic Theory of Meaning: New Opportunities for Cognitive Modeling1 N.Almayev Introduction Recent works in cognitive modeling (I mean first of all development of neural networks approach) have achieved considerable success in technical aspects, in the answering to the question: "how to model?

" This paper on the contrary will be focused on the complementary question: "what is to be modeled? " (as it seems promising from the psychological perspective). Knowledge of Meaning - An Introduction to Semantic Theory. Posted on 2010-01-29. By anonymous. Description. A Cognitive Theory of Cultural Meaning. General Issues in Scaling. « PreviousHomeNext » S.S. Stevens came up with what I think is the simplest and most straightforward definition of scaling. Theories of Meaning. First published Tue Jan 26, 2010; substantive revision Tue Jun 1, 2010 The term “theory of meaning” has figured, in one way or another, in a great number of philosophical disputes over the last half-century. Unfortunately, this term has also been used to mean a great number of different things.