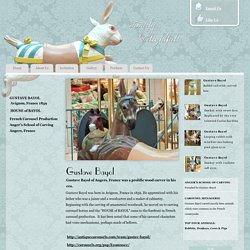 All rights reserved. Terms of Use | Privacy Policy Gustave Bayol of Angers, France was a prolific wood carver in his era. Gustave Bayol was born in Avignon, France in 1859. He apprenticed with his father who was a joiner and a woodcarver and a maker of cabinetry. French Carousel Production Anger’s School of Carving Angers, France Founded by Gustave Bayol Gustave Bayol carved mostly farm animals which were common in the French countryside. Rabbits, Donkeys, Cows & Pigs.

Fairground art. Horizontal Metal Circus Signs Prop - Set of 3, Halloween Circus Sign Decorations. Pablo Picasso — "Rose" Period. In Picasso’s work, the Rose Period was relatively short (from the fall 1904 until the end of 1906) and quite uneven. 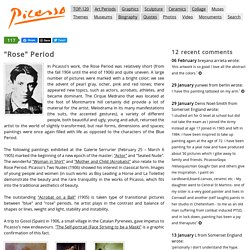 A large number of pictures were marked with a bright color; we see the advent of pearl gray, ocher, pink and red tones; there appeared new topics, such as actors, acrobats, athletes, and became dominant. The Cirque Medrano that was located at the foot of Montmartre hill certainly did provide a lot of material for the artist. Melodrama in its many manifestations (the suits, the accented gestures), a variety of different people, both beautiful and ugly, young and adult, returned the artist to the world of slightly transformed, but real forms, dimensions and spaces; paintings were once again filled with life as opposed to the characters of the Blue Period.

The following paintings exhibited at the Galerie Serrurier (February 25 – March 6 1905) marked the beginning of a new epoch of the master: "Actor" and "Seated Nude". Report this ad. Picasso rose period. Fred Fowle ‘The Master’ Fairground Artist. 'Our Business is Fun' with Fred Fowle. We are currently in the process of filming the sequel to When Better Letters Met Cliff Headford. 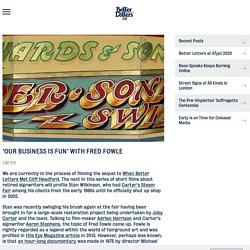 The next in this series of short films about retired signwriters will profile Stan Wilkinson, who had Carter’s Steam Fair among his clients from the early 1980s until he officially shut up shop in 2002. Stan was recently swinging his brush again at the fair having been brought in for a large-scale restoration project being undertaken by Joby Carter and the team. Talking to film-maker Adrian Harrison and Carter’s signwriter Aaron Stephens, the topic of Fred Fowle came up. Fowle is rightly regarded as a legend within the world of fairground art and was profiled in this Eye Magazine article in 2013.

However, perhaps less known, is that an hour-long documentary was made in 1975 by director Michael Whyte. Photo: John Bodkin / Eye On his death in 1983 the majority of Fowle’s pounce patterns were destroyed. . © National Fairground and Circus Archive (Photographer: Jack Leeson) Fred fowle. Photographer's portraits of British fairground art pay tribute to iconic Waltzer. A photographer has spent the last 20 years of his life travelling up and down the country capturing the art of the British fairground. 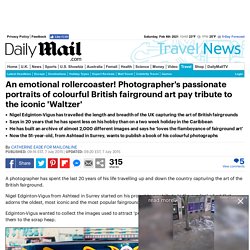 Nigel Edginton-Vigus from Ashtead in Surrey started on his project to pay tribute to the overlooked art that adorns the oldest, most iconic and the most popular fairground ride, the Waltzer. Edginton-Vigus wanted to collect the images used to attract 'punters' to a ride before they were condemned them to the scrap heap. Trippy Sixties style psychedelia adorns the back of this colourful Waltzer carriage shot by Nigel Edginton-Vigus. 23 Fairground Scenic painting ideas. The history of Carnival Fun Fairs and the Manning family, including fun fair equipment hire, fairground rides installations, overseas exporters of fairground rides, installers of fun fair equipment.

George Manning and Family Riding on one of the Carnival Funfair rides in a modern festival, the ecstatic visitor would be forgiven for not pondering over long on the proud tradition of the Manning Family in fairs as they hold on to their hats! 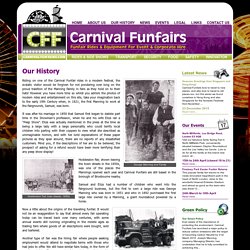 However you have more time so whilst you admire the photos of modern rides and entertainment on this site, take your imagination back to the early 19th Century when, in 1821, the first Manning to work at the Fairgrounds, Samuel, was born. It was after his marriage in 1850 that Samuel first began to dabble part time in the Showman’s profession, when he and his wife Eliza ran a “Peep Show”. Eliza was actually mentioned in the press at the time as being a large lady with a large personality who could terrify local children into parting with their coppers to view what she described as unimaginable horrors, and with her lurid explanations of these paper pictures as they span around, there are no reports of any dissatisfied customers. Diamont "T", 1957.