Do Minimum Wage Increases Benefit the Middle Class? Seattle is among a modest but growing number of major U.S. cities committed to raising its minimum wage well above national and state standards. 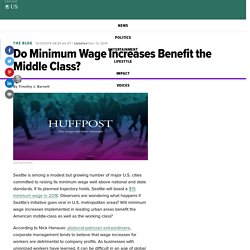 If its planned trajectory holds, Seattle will boast a $15 minimum wage in 2018. Observers are wondering what happens if Seattle’s initiative goes viral in U.S. metropolitan areas? Will minimum wage increases implemented in leading urban areas benefit the American middle-class as well as the working class? According to Nick Hanauer, plutocrat-patrician extraordinaire, corporate management tends to believe that wage increases for workers are detrimental to company profits.

As businesses with unionized workers have learned, it can be difficult in an age of global trade to raise prices as an offset to wage increases, especially with bounded consumer spending capacity and the availability of lower quality but useable substitutionary items. The Great Society and the Minimum Wage Middle Tier Productivity Incentives Why the Middle Class Takes the Hit. Study: Raising wages to $15 an hour for limited-service restaurant employees ... 2013 paper. Minimum wage: Updated research roundup on the effects of increasing pay - Journalist's Resource. In 2016, California became the first state to adopt legislation that will gradually raise the minimum wage to $15 per hour. 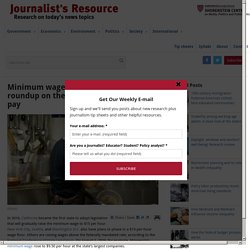 New York City, Seattle, and Washington D.C. also have plans to phase in a $15-per-hour wage floor. Others are raising wages above the federally mandated rate, according to the National Conference of State Legislators. On August 1, 2016, for example, Minnesota’s minimum wage rose to $9.50 per hour at the state’s largest companies. The changes come after years of national debate about the need to raise pay so families can earn a living wage. The U.S. federal minimum wage was first established during the Depression, and it has risen from 25 cents to $7.25 per hour since it was first instituted in 1938 as part of the Fair Labor Standards Act. But increasing the minimum wage may have impacts beyond adding more money to employees’ pockets. Earlier studies have indicated that some businesses will cut jobs to pay employees more. Fundamentals and framings Subsequent studies. Raising the Minimum Wage - Good or Bad?

Even though it’s been a bit since Obama’s State of the Union Address in 2014 where he proposed an increase of over 40% for the minimum wage, it’s still a hot-button topic. 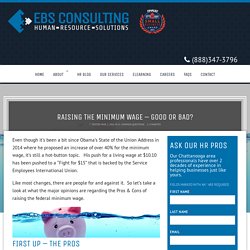 His push for a living wage at $10.10 has been pushed to a “Fight for $15” that is backed by the Service Employees International Union. Like most changes, there are people for and against it. So let’s take a look at what the major opinions are regarding the Pros & Cons of raising the federal minimum wage. First up – the Pros Boost the Economy – The thought process here is that by raising the minimum wage, workers that previously were barely making ends meet will be able to spend more money on goods and services that they previously couldn’t afford.

Next – The Cons Layoffs – If an employer has a tight budget, they won’t be able to afford raises across the board for all of their employees. But will it solve the poverty problem? Minimum Wage sites. Minimum Wage - ProCon.org. Minimum wage increases: What does the research show?: Points of View Reference Center Home.