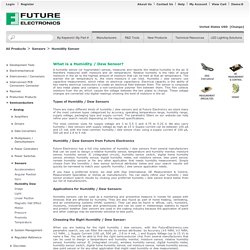 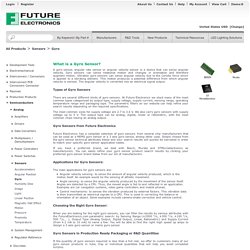 Gyro sensors can sense rotational motion and changes in orientation and therefore augment motion. Vibration gyro sensors can sense angular velocity due to the Coriolis force which is applied to a vibrating element. This motion produces a potential difference from which angular velocity is sensed. The angular velocity is converted into an electrical signal output. Types of Gyro Sensors. Digital angle, Rotary sensor, Rotary position sensor angle sensor, sensors. An angular position sensor (also referred to as a rotary sensor) measures the relation by which any position with respect to any other position is established. 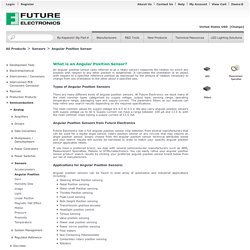 It calculates the orientation of an object with respect to a specified reference position as expressed by the amount of rotation necessary to change from one orientation to the other about a specified axis. Types of Angular Position Sensors There are many different kinds of angular position sensors. At Future Electronics we stock many of the most common types categorized by supply voltage, output type, sensing range, operating temperature range, packaging type and supply current. The parametric filters on our website can help refine your search results depending on the required specifications. Wireless applications, Pedometer, high temperature, accelerometer, Bluetooth. An accelerometer measures proper acceleration, associated with the weight of a test mass. 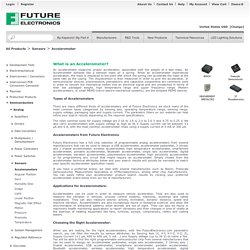 An accelerometer behaves like a damped mass on a spring. When an accelerometer experiences acceleration, the mass is displaced to the point ofat which the spring can accelerate the mass at the same rate as the casing. The displacement is then measured in order to give the acceleration. In semiconductor devices, piezoresistive, piezoelectric and capacitive components are commonly used in order to convert the mechanical motion into an electrical signal and are unmatched in terms of their low packaged weight, high temperature range and upper frequency range. 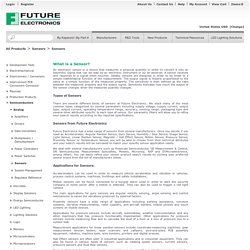 A sensor receives and responds to a signal when touched. Ideally, sensors are designed in order to be linear to a simple mathematical function of the measurement.