Visual Geometry Group Home Page. Keypoint detector. David Lowe This page provides access to a demo version of David Lowe's SIFT keypoint detector in the form of compiled binaries that can run under Linux or Windows. 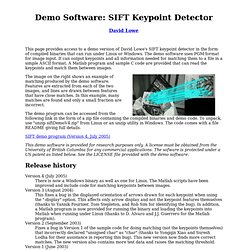 The demo software uses PGM format for image input. It can output keypoints and all information needed for matching them to a file in a simple ASCII format. A Matlab program and sample C code are provided that can read the keypoints and match them between images. The image on the right shows an example of matching produced by the demo software. The demo program can be accessed from the following link in the form of a zip file containing the compiled binaries and demo code. SIFT demo program (Version 4, July 2005) This demo software is provided for research purposes only. Release history. India - Extract interest point descriptors - MATLAB. Extract interest point descriptors Syntax [features,validPoints] = extractFeatures(I,points) example[features,validPoints] = extractFeatures(I,points,Name,Value) example. 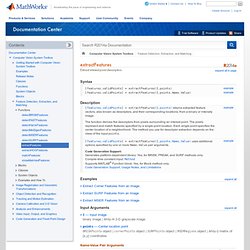 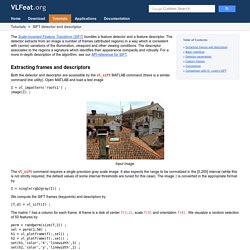 The detector extracts from an image a number of frames (attributed regions) in a way which is consistent with (some) variations of the illumination, viewpoint and other viewing conditions. The descriptor associates to the regions a signature which identifies their appearance compactly and robustly. For a more in-depth description of the algorithm, see our API reference for SIFT. Both the detector and descriptor are accessible by the vl_sift MATLAB command (there is a similar command line utility). Open MATLAB and load a test image I = vl_impattern('roofs1') ;image(I) ; Input image. The vl_sift command requires a single precision gray scale image. I = single(rgb2gray(I)) ; We compute the SIFT frames (keypoints) and descriptors by The matrix f has a column for each frame. Some of the detected SIFT frames. We can also overlay the descriptors by. Van de Sande: ColorDescriptor software (including Color SIFT) Created by Koen van de Sande, (c) University of Amsterdam Note: Any commercial use of this software requires a license. 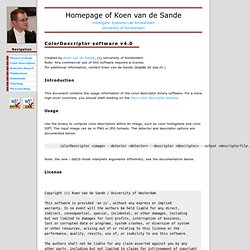 For additional information, contact Koen van de Sande (ksande at uva.nl) Introduction This document contains the usage information of the color descriptor binary software. For a more high-level overview, you should start reading on the main color descriptor website. Usage. SIFT: Scale Invariant Feature Transform. Matching features across different images in a common problem in computer vision. When all images are similar in nature (same scale, orientation, etc) simple corner detectors can work. But when you have images of different scales and rotations, you need to use the Scale Invariant Feature Transform. Why care about SIFT SIFT isn’t just scale invariant. You can change the following, and still get good results: Scale (duh) Rotation Illumination Viewpoint Here’s an example. And we want to find these objects in this scene: Here’s the result: Now that’s some real robust image matching going on. The algorithm SIFT is quite an involved algorithm. Constructing a scale space This is the initial preparation.

That was an overview of the entire algorithm. What do I do with SIFT features? After you run through the algorithm, you’ll have SIFT features for your image. Track images, detect and identify objects (which can be partly hidden as well), or whatever you can think of. Van de Sande: Color Descriptors (including color SIFT) Computer Vision Talks. A battle of three descriptors: SURF, FREAK and BRISK « Computer Vision Talks. I think developers and research guys who works with object recognition, image registration and other areas that uses keypoint extraction can find this post useful. 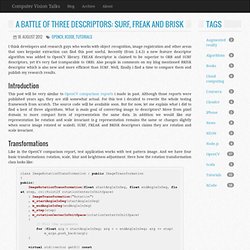 Recently (from 2.4.2) a new feature descriptor algorithm was added to OpenCV library. FREAK descriptor is claimed to be superior to ORB and SURF descriptors, yet it’s very fast (comparable to ORB). Also people in comments on my blog mentioned BRISK descriptor which is also new and more efficient than SURF. Well, finally i find a time to compare them and publish my research results. Introduction This post will be very similar to OpenCV comparison reports i made in past. Transformations Like in the OpenCV comparison report, test application works with test pattern image. Other types of transformations looks similar. FeatureAlgorithm As you may know we need three components when dealing with descriptors: Feature detector - class derived from cv::FeatureDetector class that implements particular detection algorithm. Test routine.