Mediathek - Maschinenfabrik Bernard KRONE GmbH. Show hite from at all next > 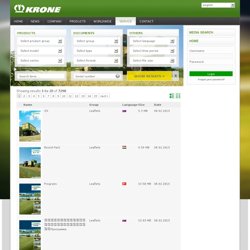 Paper size. A size chart illustrating the ISO A series and a comparison with American letter and legal formats. 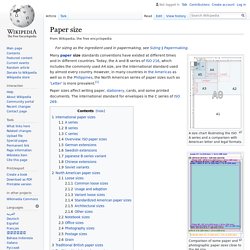 Comparison of some paper and photographic paper sizes close to the A4 size. Paper sizes affect writing paper, stationery, cards, and some printed documents. The international standard for envelopes is the C series of ISO 269. International paper sizes[edit] The following international paper sizes are included in Cascading Style Sheets (CSS): A3, A4, A5, B4, B5.[2] A series[edit] A size chart illustrating the ISO A series. The base A0 size of paper is defined as having an area of 1 m2 and a dimension ratio of 1 to √2, making the A0 paper size exactly m × m. Successive paper sizes in the series A1, A2, A3, and so forth, are defined by halving the preceding paper size across the larger dimension. The behavior of the aspect ratio is easily proven: on a sheet of paper, let a be the long side and b be the short side; thus, a/b = √2. The DIN 476 standard spread quickly to other countries. B series[edit] Massey Ferguson - Home. Disk Drive Prices (1955-2010)

In general, these are the lowest priced disk drives for which I could find prices at the time. 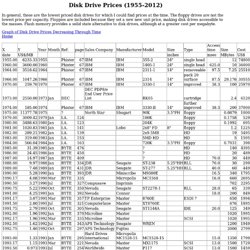 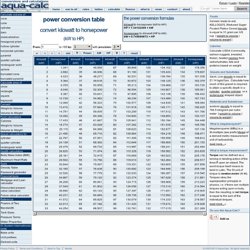 Materials and Substances density is equal to 1830.2 kilogram per cubic meter [ weight to volume | volume to weight ] What is pound per square micron? A (lb/μm²) is a non-metric measurement unit of surface or areal density . What is surface density or areal density measurement? The of a two-dimensional object, also known as area or areal density, is defined as the mass of the object per unit of area. Do you like Aqua-Calc? FileInfo.com - The Central File Extensions Registry. Free programs to open any file extension!

DIY projects, how-tos, and inspiration from the workshops and minds of geeks, makers, and hackers @ Make: magazine. Home. The life and times of Steven Paul Jobs, Part One. When sober, F. Scott Fitzgerald may have been devastatingly intelligent, but he got it dead wrong when he wrote "there are no second acts in American lives". Think Elvis , for example. Or lefty sinkerballer Tommy John of the eponymous surgery. Or, for that matter, Grover Cleveland , whose two acts as US president were separated by a four-year intermission. In the business world, however, second acts are rare. Except for Steve Jobs. The career of Apple's cofounder and savior not only had a second act, but a long and successful third act that spanned from his return to Apple in 1997 to his resignation this August. And to further give the lie to Mr Fitzgerald, Jobs' second act held true to the dramaturgical dictum that as the curtain closes on Act II, our protagonist should be at the end of his rope, facing seemingly insurmountable odds.